Brookhaven to incur $683,000 in costs if council OKs annexations: Report

Brookhaven would pay $683,000 to provide city services to two areas that have asked to be annexed into the city, according to a recent report from the city manager.

The cost would cover compensation and equipment for five additional police officers needed to serve Executive Park and the campus of Children’s Health Care of Atlanta, as well as for one code enforcement officer. 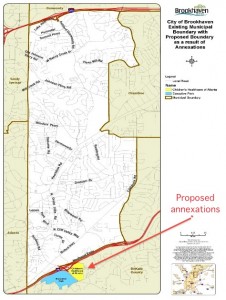 Two business districts have filed petitions to be annexed into Brookhaven: Executive Park and Children’s Healthcare of Atlanta. Click on the map for a larger image. Credit: brookhavenga.gov, David Pendered

The report does not distinguish between annual compensation costs, such as salaries, insurance and other potential benefits, and the cost of buying vehicles and equipment for the additional employees.

The city’s website does not appear to provide information on the annual taxes and fees Brookhaven expects to collect if the council approves the annexations.

The report is dated Oct. 30. That’s more than three weeks before the city council voted Monday in a special-called meeting to postpone a vote on the proposed annexations until the council’s next scheduled meeting, on Dec. 2.

A statement issued by the city does not indicate there’s any correlation between expenses associated with the proposed annexations and the deferral.

Here are two comments provided in the city’s statement:

The proposed annexation is part of the municipalization movement that’s been rolling across DeKalb County for about a decade.

One bill has already been pre-filed in the Georgia Legislature on an issue related to incorporation.

State Rep. Rahn Mayo (D-Decatur) filed House Bill 11 on Monday. Mayo could not be reached Wednesday morning to describe the purpose of the bill. 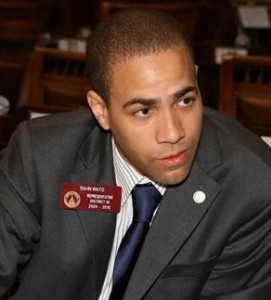 Mayo’s proposal appears to address the relation between the boundaries of a potential new city and an existing city. The proposal provides for four amendments to existing law.

Meanwhile, Legislature is expected to take up proposals for new cities in the region stretching from Brookhaven’s eastern border, which now ends at I-85, northeast through the Lakeside/Northlake Mall area and ending at Tucker.

In addition, Emory University and the nearby Druid Hills neighborhood have begun talks with Atlanta to be annexed into the city.

The report from Brookhaven City Manager Marie Garrett addresses nine issues related to the proposed annexation of Executive Park and CHOA. Here are the two services that would cost the city additional expenses, according to the report: