Georgians have been promised a look at least one gubernatorial candidate’s tax returns, maybe two. But while challenging one’s opponents to publish their taxes is becoming a campaign-season standard, it’s not part of the law. 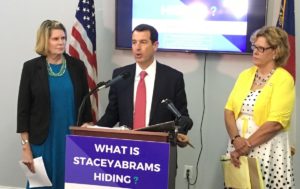 Just a little after Georgia finished its first round of primary voting, the state GOP went on the offensive about taxes last week, holding a press conference at Cobb County party headquarters to demand Democratic gubernatorial nominee Stacey Abrams release her tax returns.

“I do question whether or not the Democrat nominee has … financial acuity and decision-making on her own personal level, much less on behalf of 10 million people” of Georgia, said the state House’s second-ranked Republican, Speaker Pro Tempore Jan Jones of Milton.

About the moment that event ended, a statement from Abrams’ campaign popped up in reporters’ inboxes, promising her tax returns.

“Just as Abrams released personal financial disclosures earlier this year, she will release tax returns once there is a GOP nominee,” wrote Abrams spokeswoman Priyanka Mantha. A GOP nominee will be picked in a July 24 runoff election between Secretary of State Brian Kemp and Lt. Gov. Casey Cagle.

Mantha wrote that the GOP’s “hypocrisy on this issue would be laughable if it didn’t demonstrate how out of touch they are with the struggles of everyday families.”

Abrams has been open about owing back taxes to the federal government, saying that delaying payments wasn’t her smartest move, but it gave her cash in hand to help take care of family. 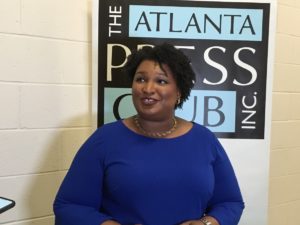 On the Republican side, “Brian Kemp’s taxes are prepared and ready for release,” spokesman Ryan Mahoney said in a text Monday. “Will Casey Cagle join him or does he have something to hide?” the text continued.

The Cagle campaign did not respond to an email sent seeking comment last week.

Mahoney, via phone, said that “especially candidates for governor should be required to disclose how they make money, where their sources of income originate, and that information also should be easily accessible and available, easy to read.” Candidates do have to file disclosures, but they can be a little bit confusing, he said.

“You should have to release your tax returns or any other information that is deemed pertinent,”  said Mahoney.

Asked whether candidates on both sides of the aisle should publish tax returns, Georgia GOP Chairman John Watson said, “I’m not going to do the Democrats’ job for them, but I would certainly expect when we have a nominee, that that person will be solicited and asked this very similar question.”

Candidates don’t have to publish their tax returns under Georgia law, but some choose to. Last year, Keisha Lance Bottoms published some of her tax documents in a successful Atlanta mayoral race where No. 2 finisher Mary Norwood had done the same.

President Donald Trump has broken with presidential tradition by withholding his tax returns.

In Maryland earlier this year, state lawmakers debated making presidential candidates release their tax returns in order to get on the state’s ballot. It was one of about two dozen states that had the same idea, though it’s not clear to everyone that such a move is constitutional.

There seems to be even less discussion about requiring income taxes in lower-level races, like those for governors of states. So that leaves the curious public in Georgia with documents due annually called “personal financial disclosures.”

On those documents, Georgia candidates and officeholders are supposed to  list fiduciary positions, stakes in businesses worth more than $5,000 or 5 percent of ownership, property worth more than $5,000, employment, investments and payments received from the state of Georgia.  Some of the same disclosure requirements also apply to politicians’ spouses and children.

That’s more than some states require. According to the nonpartisan National Conference of State Legislatures, some states don’t even specify what candidates have to disclose.

“To be elected the governor of the eighth-largest population state in the country should involve extreme scrutiny and we should challenge whomever are the candidates for either party to provide transparency so that we can make a reasonable determination as to which … could best serve Georgia,” Jones said during her prepared remarks last week.

Asked afterward about policy, if there’s space to strengthen ethics rules, Jones said, “That certainly sounds reasonable to me, to have greater transparency.” Though she specified perhaps only for the highest, most influential office in the state, not necessarily the much less influential part-time citizen-legislators under the Gold Dome.