Candidates snub voters when they don’t show up for debates

U.S. Sen. Raphael Warnock points to an empty podium caused by Herschel Walker's failure to appear to the Oct. 16 debate, which included Libertarian Chase Oliver. (Photo by John Glenn Photography for the APC.)

Four candidates running for public office during the 2022 General Election were “no shows” at the Atlanta Press Club’s Loudermilk-Young Debate Series of 16 debates taking place at Georgia Public Broadcasting from Oct. 16 through Oct. 18.

Being a no-show speaks volumes. Here are candidates running for public office who didn’t bother showing up for one of the rights of passage on the path to public office.

The two Democrats were Rep. Lucy McBath, who currently represents District 6 and is running for District 7, and Rep. David Scott, who has been representing District 13 since 2003. Neither McBath nor Scott even bothered to inform the Atlanta Press Club of whether or not they would attend. 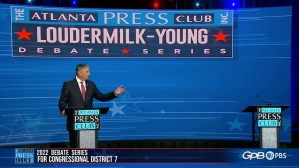 The two Republicans were Herschel Walker, who is running for the U.S. Senate, and Mike Collins, who is running for Congressional District 10 — a new district for him. Walker was represented by an empty podium during the primary debate. For the general election debate, his campaign didn’t even respond to the Atlanta Press Club’s invitation.

Of note, both McBath and Collins participated in the primary debates. At least Collins’ campaign did inform the Atlanta Press Club that he planned to decline the general election debate.

Thirty years ago, I was one of the founding members of the Atlanta Press Club’s debate committee. Since then, I have either chaired or co-chaired the committee, and WABE reporter Rahul Bali is our current co-chair. Georgia Public Broadcasting has been our primary media partner for the entire 30 years — a partnership that continues to get stronger.

To the best of our knowledge, the Atlanta Press Club’s statewide debates are the most robust debate series in the nation. Just this year, we have held 14 primary debates and seven primary run-off debates in addition to our 16 general election debates. 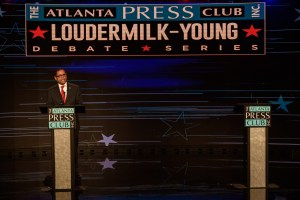 Republican Ceasar Gonzales debates an empty podium because U.S. Rep. David Scott was a no-show. (Photo by John Glenn Photography for the APC.)

Putting on these debates involves dozens of people – both from the Atlanta Press Club and GPB. Much of our success is thanks to Lauri Strauss, who has been coordinating our debates for more than a dozen years.

It has never been more important for voters to be well-informed about their choices before going to the polls. And debates are one of the best ways to get to know the candidates who are running in a non-partisan and unscripted format.

Many debate organizers cancel their debates if there’s an empty podium. But the Atlanta Press Club and GPB strongly believe that canceling a debate penalizes the candidate who is willing to show up. And we believe it’s important for the public to know who is willing to show up and who won’t. We have gone to extraordinary lengths to work with campaigns that have legitimate scheduling issues because we want the full participation of all the candidates who are on the ballot.

In that spirit, I want to applaud 21 of the 25 candidates we invited to our general election debates for participating in our debates. The list includes incumbents who are well ahead in the polls to candidates running for open seats. 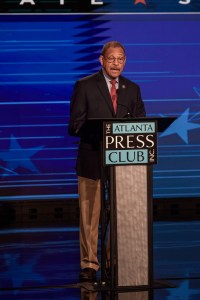 Rep. Marjorie Taylor Greene (R-District 14) told me showing up for debates is an important part of the political process. It’s like showing up for a job interview. By the end of the debate between Greene and Democrat Marcus Flowers — one of the most volatile debates we’ve ever held — voters had a clear understanding of their choices when they go to the polls.

“Even though my district is a very strong Republican district, and I’m confident that my district will re-elect me on Nov. 8, I believe in the debate process because I firmly believe that we work for the American people,” Greene said after the debate. “It’s so important for the voters to be able to hear both sides.”

In addition to our empty podium policy, we also have a policy of inviting all the candidates whose names appear on the ballot, which means we included Libertarian candidates in seven of our general election debates. Libertarian Chase Oliver, who is running for U.S. Senate, thanked us for that policy. In the one debate that Herschel Walker did in Savannah on Oct. 14, Oliver was not invited.

As you can tell, I’m really proud of what we’ve been able to create with our Loudermilk-Young debate series. Much of the credit is because of a generous donation from the late Charlie Loudermilk, who named the series in honor of his special friendship with former Atlanta Mayor Andrew Young. 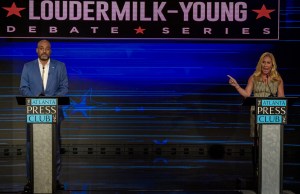 We also have evidence that our empty podium policy has had an impact on elections.

So, not only is it a misguided calculation to skip debates, it also goes against the spirit of running for public office. Candidates are vying to be public servants. They should not let political expediency override their participation in debates. In short, participating in debates is a great indicator of what kind of elected leader that candidate will be.

On Oct. 14, I had the opportunity to speak to Rep. Lucy McBath at the ground-breaking of the expansion of the National Center for Civil and Human Rights. I tried my best to convince her that she should participate in our Sunday debate. “We’re trying to work out the logistics,” she said. After the event, former Atlanta Mayor Shirley Franklin told me she had overheard my conversation with McBath. “I told her she shouldn’t do it,” Franklin said, adding that McBath would have been taking a political risk if she had accepted. Sadly, Franklin was using a political calculus rather than focusing on what’s in the public’s best interest. 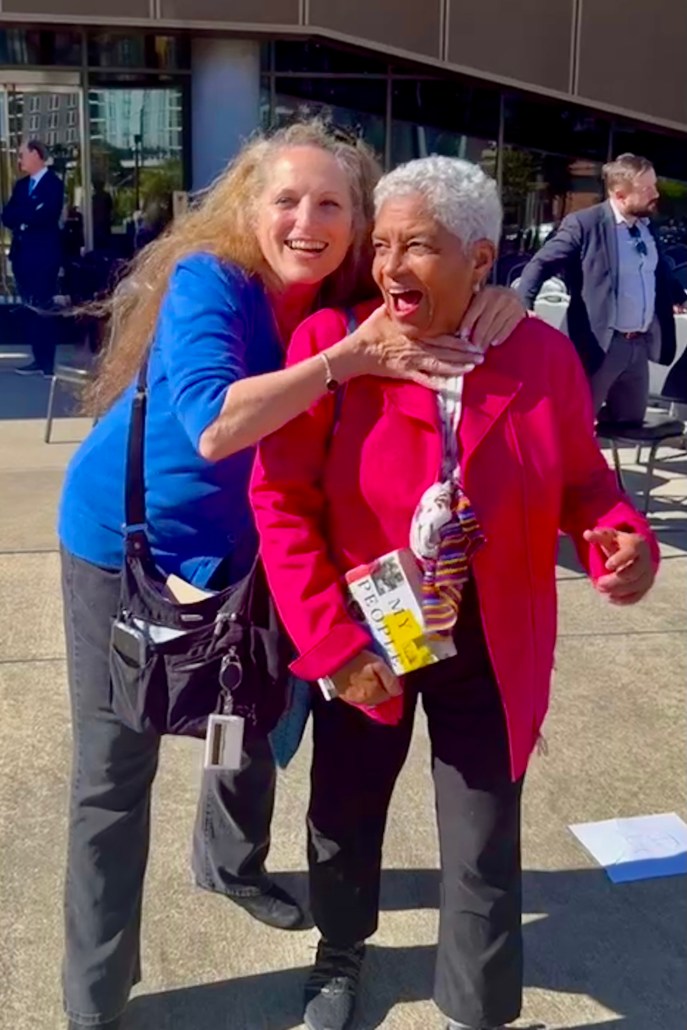