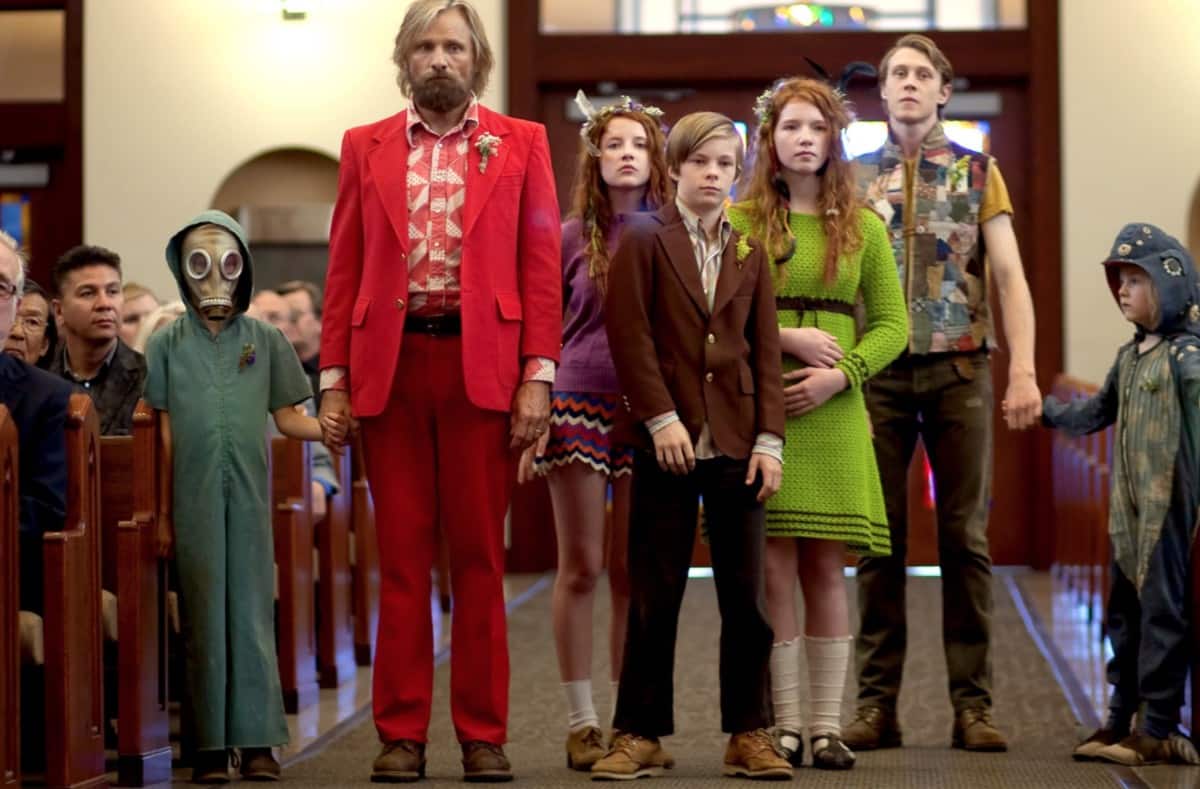 'Captain Fantastic' is a well-told tale of a throwback to Woodstock having to bring his children out of the woods into the modern world to attend the funeral of the children's mother. Credit: spinoff.comicbookresources.com
Share5
Tweet
Share
Pin
Pocket
WhatsApp
Buffer
Email
Reddit
5 Shares

The kids are all right in the excellent new film, “Captain Fantastic.” 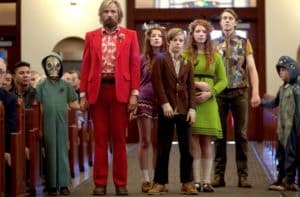 ‘Captain Fantastic’ is a well-told tale of a throwback to Woodstock having to bring his children out of the woods into the modern world to attend the funeral of the children’s mother. Credit: spinoff.comicbookresources.com

Matt Ross’s heartfelt tribute to some of the better (and some of the worse) elements of the whole hippie “Stick it to the Man” mentality has both a heart and a brain – a rarity in movies these days.

Captain Fantastic, better known as Ben (Viggo Mortensen), has taken his family and headed for the hills. Literally. He and his six children – ages late-teens to little kids – live off the land. More crucially, they live off the grid in a kind of Wilderness Family neo-paradise where Walmart is to them as Atlantis is to us.

On an average day, they kill a deer in the morning (for dinner), rock climb in the afternoon and sit around the campfire at night, reading “Middlemarch” and “The Brothers Karamazov.” They’ve found their bliss – and then some.

Mom is … well, Mom isn’t with them. In fact, as we learn in the film’s first 10 minutes, she’s committed suicide during one of her increasingly frequent hospital stays. It’s her funeral that draws Ben and his brood out of their idyllic lair in the Pacific Northwest.

Ben’s father-in-law (Frank Langella) would rather Ben not attend. That’s all it takes to get everyone on a bus named Steve (never explained) and head south. En route, they “free the food” from a supermarket, i.e., make off with a shopping-cart full of goods; fake out a suspicious cop who turns tail and runs when their hippie freakiness turns into Jesus freakiness (“Jesus is blessed” they sing as he makes for Steve’s door); and generally learn there’s a brave new world out there, complete with K-marts and shopping malls and fat people. Perusing a diner’s menu, with its milkshakes, pancakes and hot dogs, Ben protests, “There’s no actual food on this menu.” 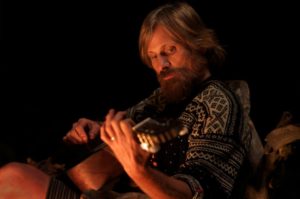 Viggo Mortensen delivers a fearless performance that probes how, and why, people must grow up. Credit: spinoff.comicbookresources.com

As you might guess, the family reunion doesn’t go well, nor does the funeral, which Ben and the kids crash as if they were 21st century Merry Pranksters. (An aside: Did Ken Kesey and his crowd name their bus?).

The last 10 minutes or so are a let-down, the sort of mushy, granola-brained stuff that probably sounds better when you’re stoned. But overall, Matt Ross – you know him better as an actor on “Silicon Valley” and “American Horror Story” – has made a lovely movie, one that celebrates the values of the almost-mythical (at this point) ‘60s counterculture, while simultaneously insisting that the Woodstock generation could be as smugly self-righteous as they were sunnily free-spirited.

We see this most clearly in Mortensen’s fearless performance. Ben is a cross between The Great Santini and the original cast of “Godspell.” He’s a sort of flower-power tyrant, simultaneously rigid and rebellious. In one sense, the movie is about how – and why – someone must grow up. There are reasons the absent mom committed slashed her wrists. He was living the dream while she was … well, if it was a dream for him, for her, it was more like a nightmare.

Mortensen’s willingness to delve into his character’s dark side gives the picture a sharper edge, a certain self-awareness.

The rest of the cast echoes his daring ambivalence. For instance, Langella is no paper-thin Establishment villain; he truly wants the best for his grandchildren. And the younger actors understand how to be outrageous (and funny) without ever hamming it up.

“Captain Fantastic” is from the ‘60s, too, but infused with 20/20 hindsight that’s both forgiving and clear-eyed. If it had been released in1970, people would still be talking about it today.