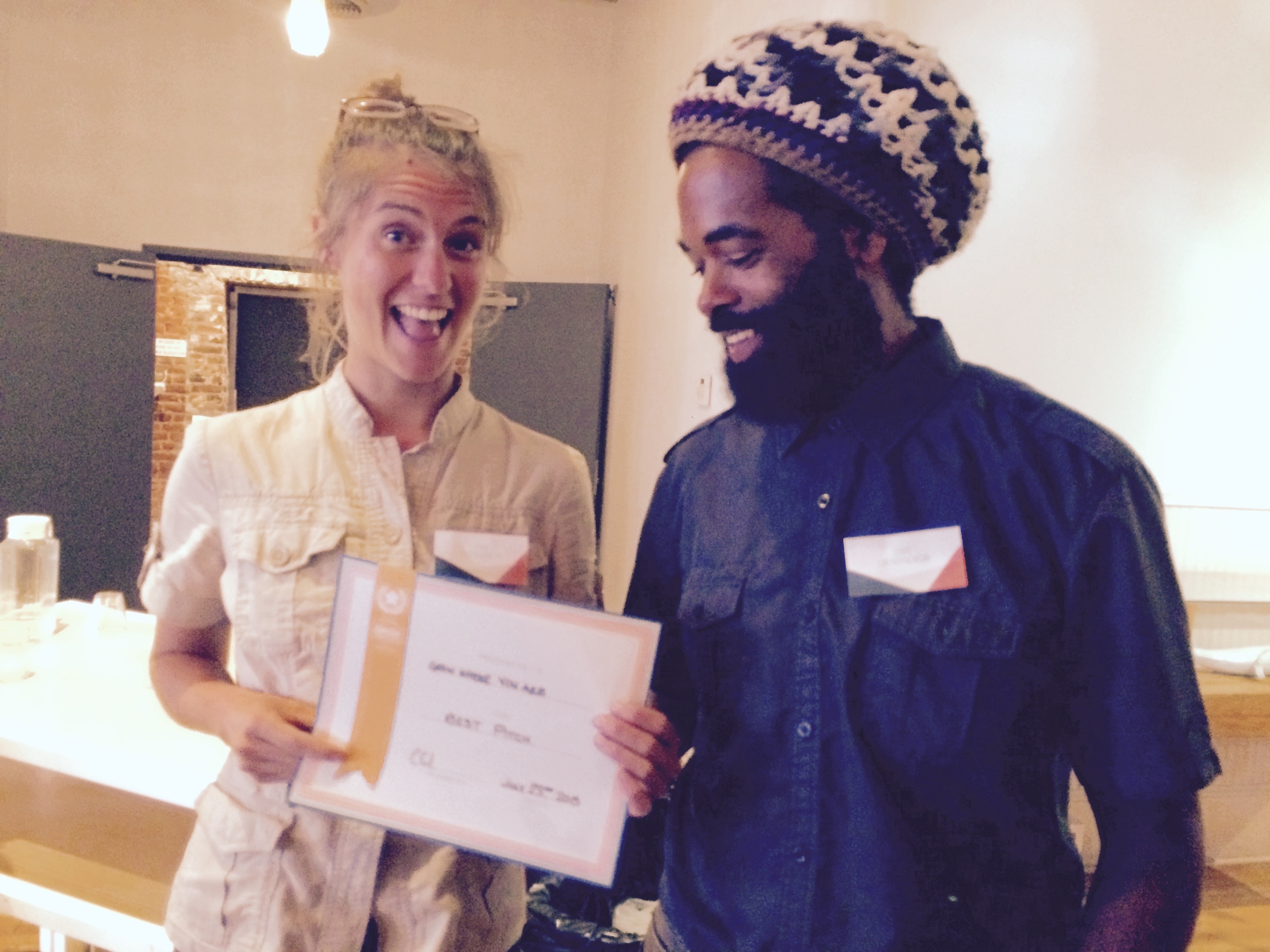 How can the 755,400 people in metro Atlanta and north Georgia who are “food insecure” best be served with access to fresh, healthy affordable and clean foods?

That was the “Food Access” challenge issued by the Center for Civic Innovation and the Atlanta Community Food Bank launched earlier this year.

On Thursday afternoon, 10 teams of aspiring entrepreneurs presented their proposals to a group of about 70 engaged citizens meeting at the Center for Civic Innovation in the M. Rich Building in downtown Atlanta. 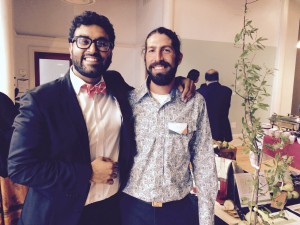 CCI’s Rohit Malhotra congratulates Robby Astrove for winning “Most Impact” award for his efforts to plant fruit orchards throughout the city. Notice fruit tree on the right. (Photos by Maria Saporta)

The proposals were as varied as the people who presented them. There were urban farmers, smoothie makers, fruit tree advocates, a food cooperative, a program aimed at pregnant women and mothers with young children as well as programs to provide nutritious meals for children in schools.

Through several partners and sponsors – including a $50,000 grant from Invest Atlanta – the Center had raised a total of $85,000 to provide funding to give the entrepreneurs a boost to realize their ideas or to grow their existing businesses or nonprofit endeavors.

During the presentations, Atlanta Mayor Kasim Reed stopped by to “listen” to some of the ideas. Before leaving, the mayor pulled Rohit Malhotra, the founder and executive director of the Center for Civic Innovation, into a side room for a private conversation.

The mayor asked Malhotra how much had been raised to support these ideas. About $85,000, Malhotra told the mayor.

As he repeated that conversation, Malhotra clearly was moved by the gesture. 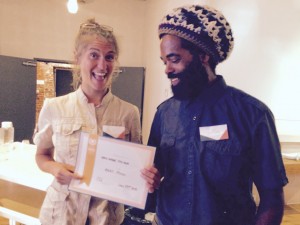 “It was totally unexpected,” Malhotra told the group of folks who had just heard the presentations. “Now we have a real pool to give you. Thank you to the mayor’s office.”

People present were asked to give three awards to the entrepreneurial teams – one for “Best Pitch,” one for “Most Innovative Idea,” and the third for “Greatest Potential for Impact.”

The “Best Pitch” award went to “Grow Where You Are” – led by Eugene Cooke with teammates: Nicole Bluh, Tanisha Nicholson and Imran Battla.

The “Most Innovative Idea” was awarded to “Maitu Foods” – led by JoVonna Johnson. MaituFoods works to develop culturally appropriate and accessible educational materials that highlight the benefit of health nutrition through a plant-based diet.

And the award for “Greatest Potential for Impact” was given to “Fruit Forward Orchards” – led by Robby Astrove with teammate Danielle Arellano.

The other entrepreneurial proposals were:

* Crave it Foods led by JacCole “JC” Burton; and

Malhotra was excited that seven of the 10 proposals were being led by women entrepreneurs – a fact that must have made an impression on Theia Washington Smith, executive director of the City of Atlanta’s Women’s Entrepreneurship Initiative. 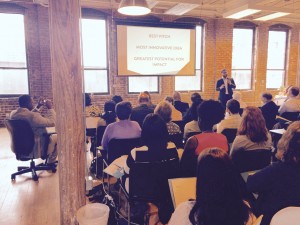 It was Washington Smith who helped arrange the side meeting between Malhotra and Mayor Reed.

The next step is that the core group involved in the “Food Access Challenge” will decide how to distribute the $100,000 to the various entrepreneurs.

By the way, CCI’s mission is to bring together, support and invest in people and organizations with new and different ideas to make the public sector more effective, innovative and participatory.

A flier distributed to all the guests elaborated on the goals of the Center for Civic Innovation: