The federal court ruling issued late Thursday that extends the Census count through Oct. 31 comes as Georgia and Atlanta are reporting completion rates that are among the lower in the nation. 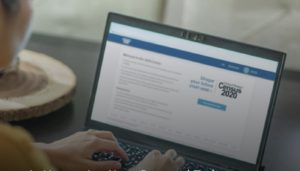 The deadline for completing and submitting a Census form was extended to Oct. 31 in a ruling issued by a federal judge. Credit: census.gov

Georgia ranks 46th of the 51 sites being counted in the report of U.S. residents, according to the Census’ Sept 24 report, the latest available. The sites include the 50 states and Washington, D.C.

A Georgia city ranks last in the nation in the count – Aldora, a town in Lamar County.

The court ruling eases pressure on advocates of the Census count for U.S. residents to complete the form within the coming five days. Sept. 30 was the deadline announced in July and early August by the Commerce Department, which administers the once-a-decade head count that’s to administer a reported $1.5 trillion in federal funds, determine the allocation of congressional seats and factor into the setting of boundaries for elected offices at the state and local levels.

In metro Atlanta, the ATLcounts Census 2020 campaign has no events scheduled. The most recent video posted on the site is a July 17, 2019 block party at the Sara Gozales Park, with an appearance by Atlanta Mayor Keisha Lance Bottoms. Bottoms launched ATLcounts Census 2020 in order to “ensure no one is left behind” in the effort to “get to an accurate count.”

U.S. District Court Judge Lucy Koh ruled Thursday that Census must continue through Oct. 31. In addition, the ruling temporarily extended the deadline for crunching the numbers to April 30, 2021 from the statutory deadline Dec. 31.

The case was filed by the National Urban League, and others, against Commerce Secretary Wilbur Ross, and others.

Koh serves on the bench of the Northern District of California.

President Trump does not appear to have tweeted about the ruling. Trump did tweet Friday that he had arrived in Atlanta, after he had tweeted about a whistle stop meeting in Doral, Fl. with an organization he described as #LatinosforTrump Roundtable.

The Commerce Department does not appear to have posted on its website a response to the court ruling.

Koh’s ruling observes that the Sept. 30 date for ending the Census count did not provide adequate time for a complete count of every U.S. resident.

The ruling also dismisses the Commerce Department’s argument that the Sept. 30 deadline was necessary to meet the Dec. 31 deadline:

In addition, the ruling observes that the Commerce Department did not provide adequate notice that it was shortening the counting period by a month – from Oct. 31 to Sept. 30: