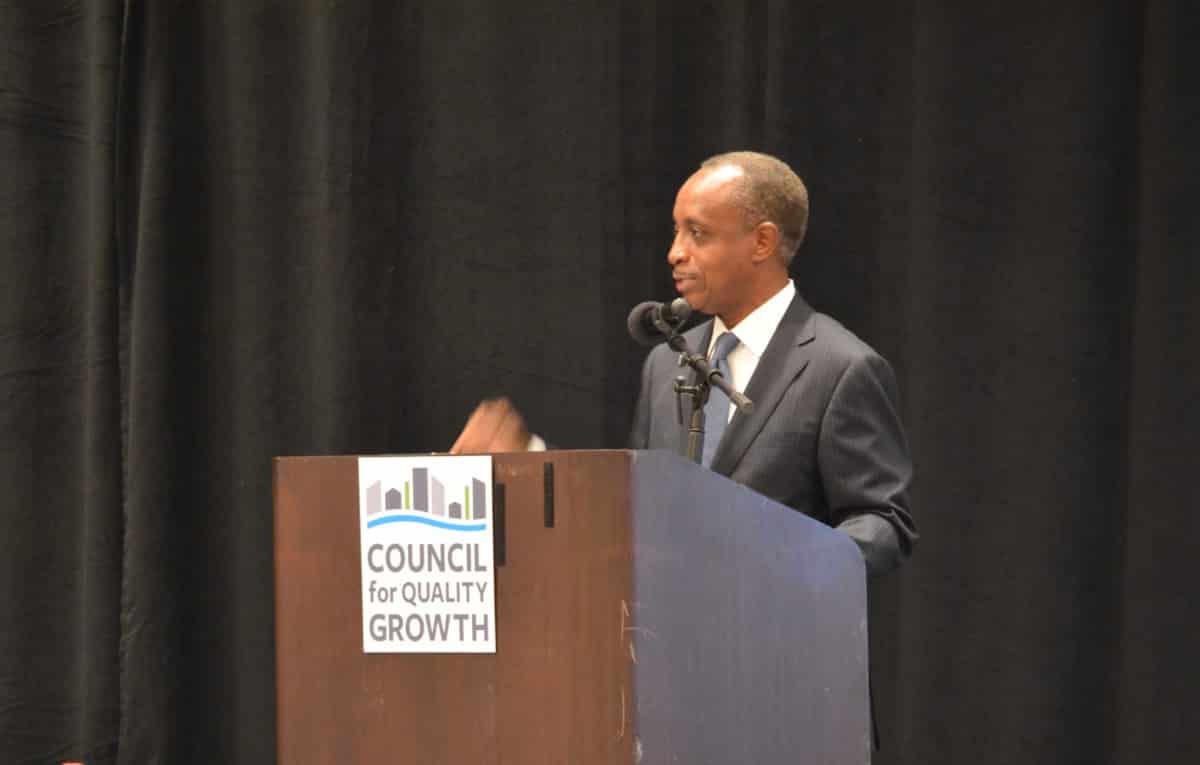 Flush from an election night victory, Thurmond delivered a thoughtful and inspiring speech last Thursday that hinted at his “new vision” for repairing the county long beset by racial divisiveness, bureaucratic mismanagement and political scandal.

Speaking at the “DeKalb Opportunity Outlook” luncheon co-sponsored by the non-profit Council for Quality Growth and Decide DeKalb (aka the DeKalb Development Authority), Thurmond addressed button-down business and community leaders at the Thalia Carlos Hellenic Center. 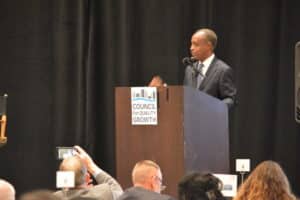 “We have the resources,” Thurmond said. “The biggest challenge that we face to our fulfillment of all that we hope and dream for is that we must overcome this age-old, nihilistic battle between north and south, black and white and rich and poor.”

Thurmond stressed that DeKalb’s racial and ethnic diversity, once considered a liability, is instead an asset that will help the county to grow and flourish. DeKalb’s colleges and universities, natural resources and transportation infrastructure will also continue to reap long-term dividends.

Prior to Thurmond’s remarks, Robert L. Ashe III, Chairman of the MARTA Board of Directors, teed up the issue of future transit expansion in DeKalb County. MARTA is proposing two major projects in DeKalb: A high-capacity corridor along I-20 East from downtown Atlanta to Stonecrest Mall and a light-rail line connecting the Lindbergh Center MARTA station to the Emory/CDC area and Avondale station in Decatur.

Atlanta voters last week overwhelmingly approved a ballot referendum to increase sales taxes to expand MARTA within the city limits, which is expected to raise about $2.5 billion over the next 40 years. Although the DeKalb County Commission had earlier decided against seeking additional MARTA funding for the 2016 election cycle, Ashe said it’s not the end of the line.

“My intention and my hope is to come back to DeKalb County and ask for a half-penny referendum for MARTA,” Ashe told the crowd. “We remain committed to expanding MARTA in DeKalb.”

Thurmond didn’t respond directly to Ashe’s comments about additional sales taxes for MARTA’s expansion. Thurmond, however, praised DeKalb’s leaders and voters for their prescient decision to invest in mass transit more than 40 years ago while, in the same breath, chided them for not doing more to expand MARTA’s footprint over the last two decades.

“How much (MARTA) expansion has occurred in the last 20 years?” Thurmond asked rhetorically. “Not one inch. During that time period I submit to you that we could have built out both lines at half the cost.”

The CEO-elect also pledged that his administration would work with newly minted cities, such as the City of Stonecrest in South DeKalb, to ensure a smooth transition of power and responsibilities.

Thurmond is widely hailed for the rescue of the DeKalb County school system after the district was on the brink of losing its accreditation several years ago. In addition, Thurmond’s previous work as Georgia’s labor commissioner, a state lawmaker and head of the Division of Family and Children Services is a much-needed testament to competence and professionalism in public service.

Despite his accomplishments, Thurmond recognized that restoring trust and confidence in DeKalb’s government will not be easy – or quick. Employing a “cold eye and a warm heart,” Thurmond pledged to stay focused on the county’s $1.4 billion bottom line while addressing the needs of its more than 700,000 residents.

After the speech, Michael Paris, president and CEO for the Council for Quality Growth, said the organization is, “very optimistic about DeKalb’s future and we are excited about working with CEO Thurmond in the coming years.”