Cheshire Bridge Road to remain an “adult” district, if Atlanta City Council upholds ruling by its zoning board

A proposal to shut down the adult shops and clubs by 2018 along Cheshire Bridge Road in Atlanta was rejected Thursday by Atlanta’s Zoning Review Board. 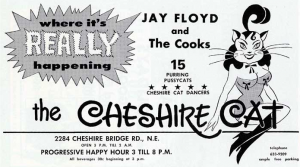 In 1968, the Cheshire Cat was the type of club that attracted crowds to Cheshire Bridge. Credit: atlantatimemachine.com

The vote is not binding and doesn’t end the debate. The battle continues to the Atlanta City Council, where the area’s representative, Alex Wan, had introduced the measure with strong support from an array of neighborhood groups.

The opposition that gathered at the ZRB meeting included a mix of gays, strippers and Atlanta’s real estate interests – including Scott Selig, whose family has developed in Atlanta since 1918. Their protests centered on issues including free expression and property rights.

The issue boils down to competing visions for the Cheshire Bridge Road corridor.

The road now is a conglomeration of restaurants, apartments, strip centers, strip clubs, warehouses, and a movie theater. It has evolved into this over the course of decades, from a retail center that offered businesses that seem mild by today’s standards.

One vision calls for Cheshire Bridge Road to be a commercial corridor with shops that cater to surrounding neighborhoods.

Another vision calls for Cheshire Bridge Road to be a regional destination that caters to people who want to shop at adult stores and attend strip clubs.

It goes without saying that the employees who work in the shops that serve the different visions tend to have separate sorts of lifestyles. That said, one stripper pleaded for the ZRB not to close Club Onyx because she uses her income to help provide for her son – a student at the U.S. Naval Academy.

Also part of the mix is the city’s zoning ordinance, which protects the rights to develop particular types of projects.

Wan’s proposal called for all adult-oriented retail businesses to close by June 30, 2018. Wan had initially filed a more sweeping proposal, but withdrew it in the face of opposition. The legislation the ZRB considered was an entirely new proposal that Wan submitted in recent days.

The ZRB took about 15 minutes to vote against the legislation.

The board first rejected two motions to send the legislation to the council with a favorable recommendation. Both proposals failed for the lack of a second.

Then the board approved two motions to send the legislation forward with an unfavorable recommendation.

The ZRB had heard public comment for more than 90 minutes. The initial 40-minute period allotted to comment was extended in order to allow the opponents to speak. Then the same extension was provided to the advocates.

Selig used a portion of his time to say the area has not been a hotbed of redevelopment because of two factors: Competition from other intown neighborhoods; and the economic downturn. Selig said his company’s business is based on buying properties with the type of zoning common on Cheshire Bridge Road because they present strong economic bases for retailers. Those zonings should not be altered, Selig said.

The current fabric of Cheshire Bridge Road is not a deterrent to redevelopment, Selig said.

Selig said the market is being affirmed by the recent – and as-yet unannounced – decision by Jeff Fuqua to develop a retail/retail complex at the corner of Piedmont and Cheshire Bridge roads. Selig said Fuqua confirmed Thursday that he planned to put a parcel under contract for the future development of 300 apartments and 33,000 square feet of retail.

Jane Rawlings was the first neighborhood representative to speak for the legislation. Rawlings serves as chair of NPU-F, the neighborhood planning unit for the area.

Rawlings contended that folks who don’t live in the area are the ones who want the corridor to remain as it is.  The folks who live nearby are tired of the current businesses and the activities they attract, she said.

“This organization represents citizens who live with the negative impact of conditions 24/7,” Rawlings said. “The greater Cheshire Bridge Road community has a right to be heard.”