Chimney swifts will have a new place to nest in Freedom Park when Atlanta Audubon completes a 12-foot tower planned at the park's Bird and Wildflower Garden. Credit: Shawn Taylor

Another home for chimney swifts is to be built in Atlanta by Atlanta Audubon, this one in Freedom Park, where it’s to shelter the birds in the wildlife sanctuary established at the Freedom Park Bird and Wildflower Garden. 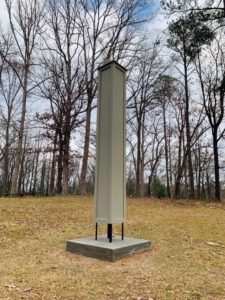 A 12-foot high tower for chimney swifts is to be built in Freedom Park. It will be similar to this tower built by Atlanta Audubon in Tucker’s Henderson Park. Credit: Tim Lynn

This new chimney swift tower will provide the second refuge for chimney swifts to be built by Atlanta Audubon in the city’s urban core – the other tower was built in 2018 in Piedmont Park. The new tower is funded with a $3,000 grant from the Georgia Department of Natural Resources’ Wildlife Viewing Grants.

Chimney swifts are quietly being edged out of the city, and region, by development and the end of the era of chimneys. They face similar threats across their habitat, located mainly east of the Mississippi River.

The construction of chimney swift towers is part of a national response to help the species that’s nearly 70 years old. It’s aimed at helping provide housing for a swift that’s been losing nesting places since at least the end of World War II.

Long ago, the common eastern swift built its home in a hollow tree, according to a report by the National Audubon Society. Then humans started cutting down hollow trees. For generations, hollow trees have been cut for reasons including making way for development, and the fear that hollow trees may fall atop a house or other structure.

Forced to find another home, swifts moved into chimneys, from which they earned their name – chimney swifts. As suitable chimneys disappear, the birds are finding fewer places to built a nest, according to Audubon.

The demise of nesting places has fostered a cottage industry in construction of towers for chimney swifts. One popular design dates to 1952, when Althea Rosina Sherman introduced her design in her book, Birds of an Iowa Dooryard, according to report by the Audubon’s Mississippi River Field Institute. The design of Atlanta Audubon’s towers are within this legacy.

The tower planned at Freedom Park joins the four towers that Atlanta Audubon has erected since 2018, when it opened its first chimney swift tower in Piedmont Park, at Piedmont Commons. Atlanta Audubon is in conversations with other advocacy groups to install additional towers.

The collection of refuges for the nearly threatened chimney swift includes: 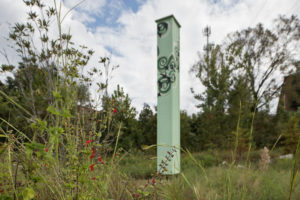 The chimney swift tower in Freedom Park is to be located near the intersection of North Avenue and Candler Park Drive. The area also is home to the bird and wildflower garden installed by the Freedom Park Conservancy and its partners.

The tower will provide a home to chimney swifts in one of the city’s larger parks. Freedom Park covers more than 200 acres and is the shape of cross, with the center located at the Carter Center. The Atlanta Freedom Trail covers a stretch of the park and serves the Carter Center and its library and the Martin Luther King Jr. National Historic Park.

This is the description Atlanta Audubon provides about the status of chimney swifts: 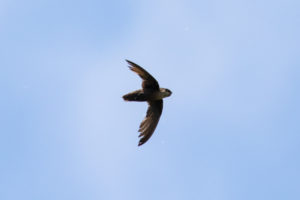 Chimney swifts will have a new place to nest in Freedom Park when Atlanta Audubon completes a 12-foot tower planned at the park’s Bird and Wildflower Garden. Credit: Shawn Taylor