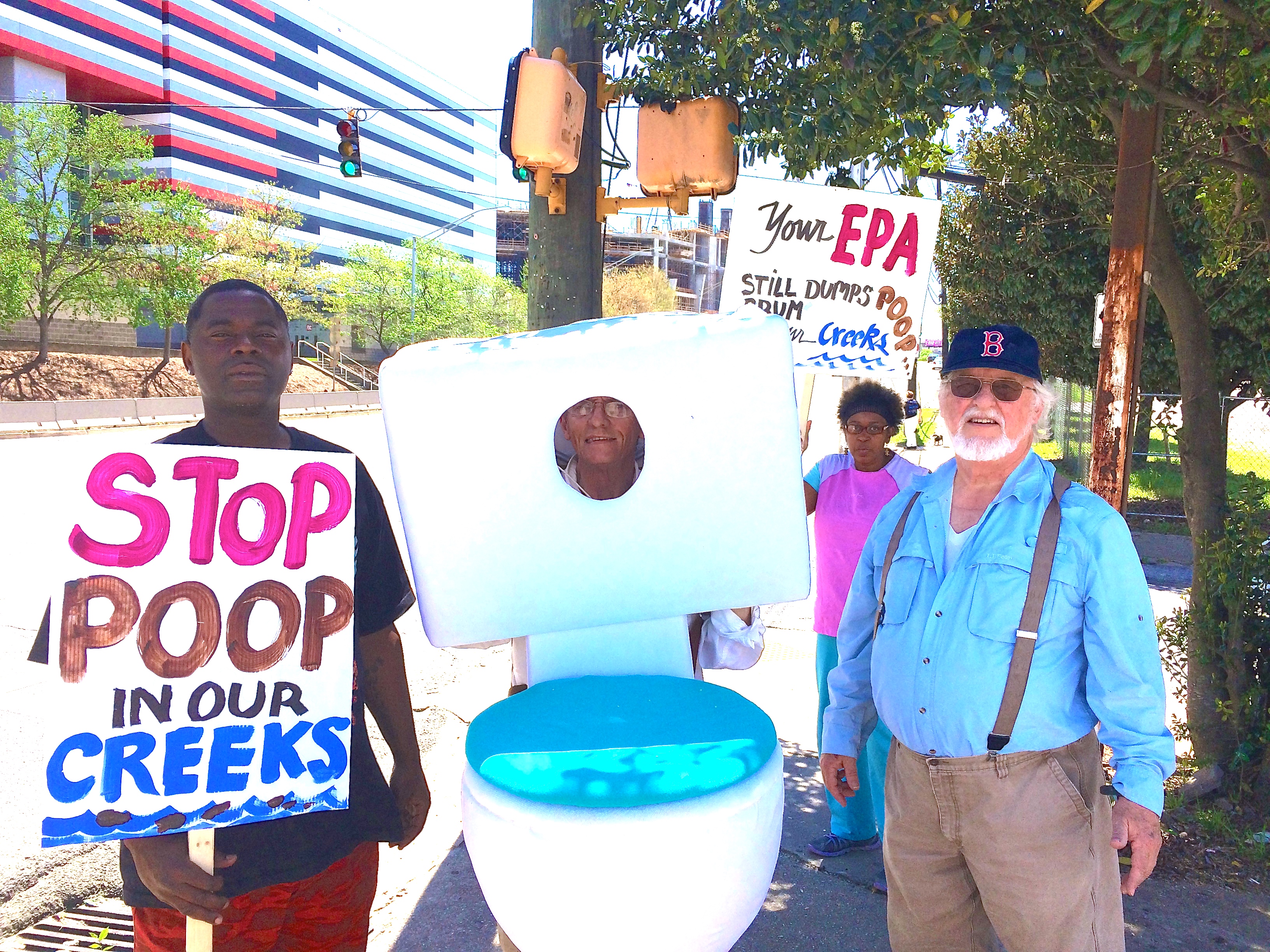 A human toilet featured at the "Cut the Crap" rally on April 11 at Northside Drive and Magnolia Street. Tony Torrence and Bill Eisenhauer stand on either side of the toilet (Photos by Maria Saporta)
Share60
Tweet32
Share6
Pin
Pocket
WhatsApp
Buffer
Email
Reddit
98 Shares

A group of dedicated activists stood on the corner of Northside Drive and Magnolia Street on a recent Saturday holding posters and waving signs. “Stop Poop in Our Creeks.”

A driver turned off Northside onto Magnolia and motioned to Tony Torrence, a community leader, to come over. The night before there had been heavy rains and he said the area around his house had that all-too familiar smell of sewage.

Welcome to English Avenue and Vine City – part of the city that is still served by the antiquated “combined sewer overflow” (CSO) system. 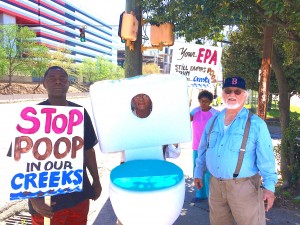 A human toilet featured at the “Cut the Crap” rally on April 11 at Northside Drive and Magnolia Street. Tony Torrence and Bill Eisenhauer stand on either side of the toilet (Photos by Maria Saporta)

So after several billion dollars spent to fix Atlanta’s sewer problems – forced by a lawsuit and a judge-mandated consent decree – great progress was done in upgrading an aging infrastructure in most of the city.

But problems remain – especially in the central city – the 9 percent of Atlanta still served by CSOs (see map). 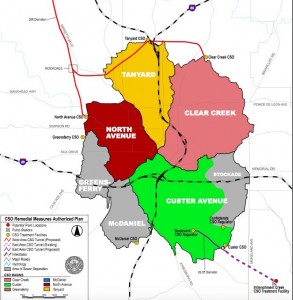 Map shows the areas where there are still combined sewer overflows. (City of Atlanta)

Now the City of Atlanta has proposed a new draft permit for those areas that environmentalists and community activists strongly believe will weaken clean water standards and will make them much harder to enforce.

The Chattahoochee Riverkeeper and GreenLaw have written letters and made public comments to the Georgia Environmental Protection Division urging the state not to water down the regulations from the standards that existed when the previous permit was issued in 2005.

The whole point behind this investment was to have clean water in Atlanta and for the communities south of the city. After all the billions of dollars that have been spent and the multiple extensions to implement the sewer investments, what a shame it would be for us to just say we give up. Let’s accept that some communities will never have clean creeks free of sewage in the central core of our city. 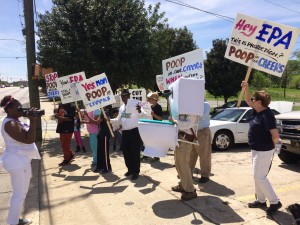 Instead of trying to get out of meeting clean water standards, the city and the state should be embracing green solutions that would be a victory for all.

“Let’s capture the stormwater so it doesn’t go into the combined sewer system,” said Bill Eisenhauer, a community activist who was the visionary who first proposed the Historic Fourth Ward Park with the lake that is really holding bowl for stormwater so that it doesn’t overload our CSO.

Look at what that one project has done. The community has a wonderful new park and green space. The old Sears building/City Hall East could be sold to become the Ponce City Market because the issue of flooding in its basement was solved. And development around the park has brought investment and new life to the Old Fourth Ward.

“New permits should support green infrastructure and should capture stormwater before it gets into our CSO,” said Yomi Noibi, founder of ECO Action, a statewide nonprofit, who opposes the new draft permit as worded. “Let’s keep the waste out of our creeks.”

Here is how GreenLaw made the case in its letter to EPD – reinforcing the fact that the Environmental Protection Administration “strongly encourages the use of green infrastructure approaches to manage wet weather flows.” 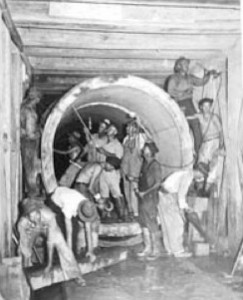 An illustration of the construction of combined sewers (City of Atlanta)

Communities with combined sewer often view green infrastructure as an attractive way to reduce stormwater flows going into the sewer system, thus helping to reduce capital and operational costs at publically owned treatment works. Urban stormwater is a primary cause of water quality impairment for thousands of water bodies across the United States. Green infrastructure practices that infiltrate, evapotranspire, capture and use rainwater represent one approach that these jurisdictions can take to meet waste load allocations for urban stormwater.

The EPA supports the integration of green infrastructure approaches in Long Term Control Plans and into remedies for non-compliance with CSO Control Policy.

When the City of Atlanta was in the early stages of putting together its plan for sewer improvements, a group of visionary environmentalists, including Eisenhauer, had urged the city to adopt a green approach at that time.

But the City took another approach until it was convinced to try a green approach with the Historic Fourth Ward Park. It can be the model for communities still served by CSOs in Atlanta.

It would take Atlanta recalibrating its whole approach towards water and sewer infrastructure. It certainly would take the city not trying to reduce meeting its clean water requirements.

Adopting a green approach would mean a partnership between the Department of Watershed Management and the Department of Parks and Recreation. And philanthropic investment likely would be needed to create amenities to make the parks attractive.

But imagine how wonderful it would be to turn our stinky neighborhoods into green jewels of reinvestment into our most historic communities.