Clean Water Coalition to honor 13 entities that protect water; five are in Atlanta 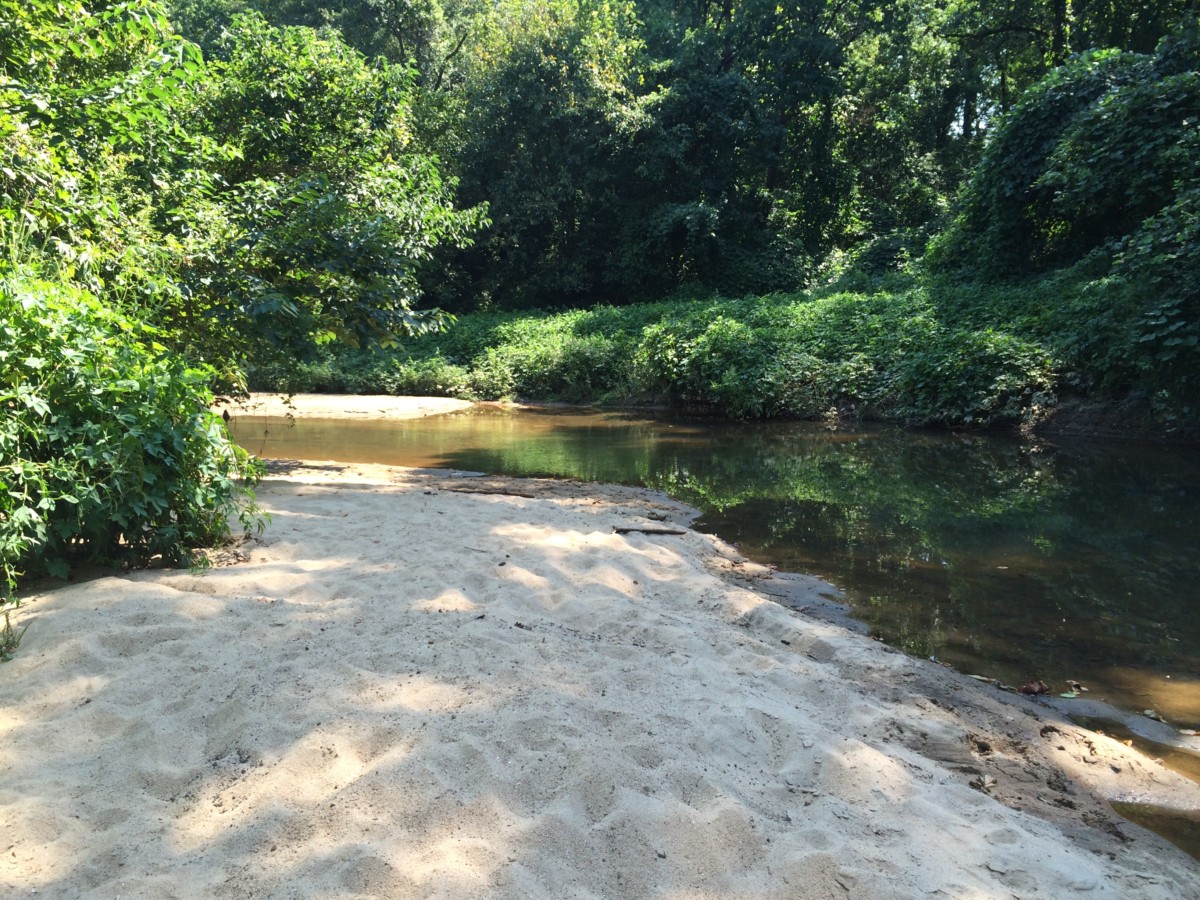 The South Fork Conservancy, a group of volunteers who joined in an effort to restore Peachtree Creek in Atlanta, is one of the 13 recipients of a new program by the Georgia Water Coalition to recognize efforts to improve the waters of Georgia. 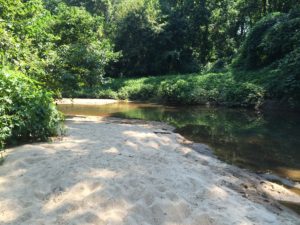 The banks of Peachtree Creek where the South Fork Conservancy has worked offer a mix of kudzu and sandy shoreline. Credit: David Pendered (Photo from September 2016)

The coalition may best be known for its annual report, The Dirty Dozen. The list shines a light on entities the coalition has identified as major polluters of state waters.

By honoring good deeds that are detailed in a report, the new program, “highlights extraordinary efforts on the part of businesses, industries, local governments, non-profit organizations, and individuals to protect the water and natural resources of Georgia,” according to a statement from the Georgia Water Coalition.

A total of five entities are to be recognized for their work in metro Atlanta. In addition to South Fork Conservancy, the coalition intends to honor Georgia Tech, the City of Atlanta, Cox Enterprises, and the Georgia Department of Natural Resources.

Sponsors of the March 8 event include a total of 33 businesses, non-profits and individuals. Most are involved in sustainability efforts of various stripes, and include the City of Atlanta’s Watershed Department, Cox Enterprises and Greenlaw and the Southern Environmental Law Center.

Here are highlights regarding honorees recognized for their work in metro Atlanta: 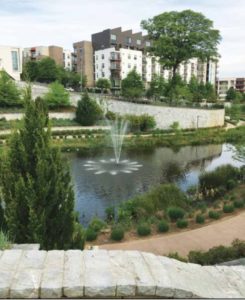 The 2-acre water retention pond in the Fourth Ward Park alleviated flooding in the area and served as a focal point for redevelopment around the park. Credit: gawater.org

“During the past decade, the City of Atlanta has become a national leader in addressing water pollution issues associated with stormwater runoff, and in 2013, the City Council adopted one of the most far-reaching post-development stormwater management ordinances in the country. Since its adoption, more than 3,500 projects have been permitted using the city’s mandatory green infrastructure standards, equating to the removal of approximately 700 million gallons of polluted run off from streams annually.”

“Imagine detailing 62,000 vehicles each year. That’s the task facing Manheim Georgia, which is part of the world’s leader in vehicle remarketing services. … Each day a steady stream of cars flows through Manheim Georgia’s reconditioning facility and a steady stream of pressurized water is used to tidy up those vehicles. The used water is collected, equalized, treated with micro-organisms that remove oil, soap and grease, run through filters to remove additional solids and finally treated with reverse osmosis membranes to create reusable water.”

“Unlike its muddy neighboring streams that drain other parts of fast-growing Paulding County, Raccoon Creek empties clear, sediment-free water into the Etowah River in Bartow County. It owes its health to the Georgia Department of Natural Resources (DNR) and a host of other partners that during the past decade have helped preserve 43 percent of the land drained by Raccoon Creek and restored portions of the creek to protect an important piece of Georgia’s natural heritage – fish and mussels that are found only in the Etowah River, and no where else in the world.”

“Georgia Tech has been a leader in green infrastructure since it built its irrst LEED certified building in 2003. Since then, the Institute has taken on the challenge of managing the rain that falls on the campus. Now that rain is collected and conserved, and the campus has become a veritable zoo of green infrastructure projects that save water and keep pollution out of local streams. The campus’ green solutions to stormwater runoff are so numerous, faculty and students have even developed a smartphone app that allows anyone to take a virtual tour of Tech’s innovative approaches to managing stormwater.” 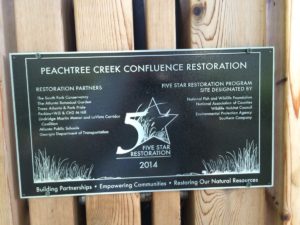 Recognition is shared for the effort to restore the confluence of Peachtree Creek, an effort led by the South Fork Conservancy. Credit: David Pendered (Photo from September 2016)

“Peachtree Creek, once a waterway where people gathered at ferries, farms, mills and baptism pools, was bridged, bulldozed and forgotten, its banks overgrown

with kudzu and privet and inaccessible except for the hardiest of explorers.
In stepped a group of citizens that saw the potential for Peachtree Creek to reconnect communities—from apartment complexes to reclaimed industrial sites—through a trail and parks system that would reunite Atlantans with this historic creek. Since 2008, the South Fork Conservancy (SFC) has established some ve miles of creekside trails and restored dozens of acres of land through the removal of invasive plants and reintroduction of native species. The group even played a role in the remediation of a 12-acre hazardous waste site that now is home to one of SFC’s signature trails.”

Tickets to the March 8 event are priced at $150 each and include dinner and general admission to the event at Mason Fine Art Gallery, 415 Plasters Ave., Atlanta.

Kelly Jordan, whose photographs appear on saportareport.com, is a sponsor of the event.