The meeting Tuesday evening in Marietta had been so benign, with no incendiary comments about the proposed sales tax for transportation, that Brett Bittner said he felt compelled to speak at the end.

“There had been so many ‘pro’ comments that I had to make sure I got to say something,” said Bittner, who’s vice president of the Cobb Taxpayers Association and executive director of the Libertarian Party of Georgia. “My concern is the cost of the projects … and what we are committing ourselves to maintaining.”

Never once over the course of the two-hour event was there a public mention of transit causing an increase in crime, as was the case at a similar event in Smyrna earlier this month.

Instead, about three-quarters of the 30-or-so questions focused on what taxpayers can expect in return for a 1 percent sales tax to be spent mainly on road and transit projects. Six questions zeroed in on how Cobb will benefit from the planned transit line from MARTA’s Arts Center Station to the Cumberland Mall area.

Even Bittner’s comments did not rile the crowd. He simply questioned whether the cost of the proposed road and transit projects should be paid more directly by those who use them roads. One additional person spoke and the meeting ended at 6:30 p.m.

By 7 p.m., the crowd of perhaps 150 had dwindled to a handful who were either staffing the event or lingering to chat with friends. They all had an interest in the forum that was hosted by the Atlanta Regional Roundtable for the sole purpose of answering questions about the proposed sales tax and project list.

During the course of the evening, the crowd had a chance to examine maps showing the projects to be built in Cobb if voters in a 10-county metro area approve the sales tax during a referendum next year.

For the question-and-answer session, each person could pose a question to a panel of three experts by writing it down and hoping the moderator asked it.

The panel was comprised of Faye DiMassimo, Cobb’s transportation director; Todd Long, planning director for the state Transportation Department; and John Orr, a veteran planner with the Atlanta Regional Commission.

Here are some highlights of the Q and A session:

Q: What projects will benefit Cobb that aren’t in Cobb?

Q: Since most of the rail stations for the transit line from MARTA’s Arts Center Station to the Cumberland Mall area are in Fulton County, what portion of their maintenance and operation will be paid for by Fulton?

A: Orr – This does raise the bigger question that goes back to transit governance. An important thing happened earlier this month. The governor appointed a transit governance task force. It will be looking at how we fund and subsidize transit around the region that crosses multiple jurisdictions, both within and without the MARTA service area.

Q: If a transit project runs over budget, where will the money come from?

A: Orr – Cost estimates were calculated carefully by GRTA and its consultants. A 30 percent contingency sum is included in the projects.

Q: What is the legal oversight to make sure all projects are completed?

A: Long – A citizens review panel will be created to oversee construction schedules and budgets. A five-member committee is to meet at least three times a year and report to the Legislature. An annual audit will be conducted. 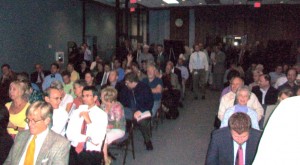 The Cobb Transportation Forum was a calmer event than a similar forum earlier in September. Credit: David Pendered