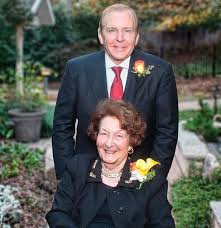 Civic leader J. Rex Fuqua is the 2018 Philanthropist of the year.

The Greater Atlanta Chapter of the Association of Fundraising Professionals will honor Fuqua at its 36th annual celebration of National Philanthropy Day at the Georgia Aquarium on Nov. 8.

“I feel humbled to be in the company with the giants in philanthropy,” said Fuqua, mentioning Bernie Marcus and Doug Hertz among others.

His late mother and father – J.B. and Dorothy Fuqua – also were honored as Philanthropists of the Year in 1989.

“Giving back to the community was deeply ingrained in my mother’s and father’s DNA,” Fuqua said in a telephone interview April 11. “They came from humble backgrounds, and they didn’t have a lot of need for material things. It’s really the continuation of our family legacy in the world of philanthropy.”

Fuqua also said that his father was “so committed to philanthropy that he wanted to give all of his money away during his life. He came close to achieving this.”

Fuqua is being honored for his contributions in the Atlanta community – especially to people suffering from mental illnesses at all stages of life. He has supported Skyland Trail since its early years, joining its advisory board in 1990 and its board in 2011.

Most recently, Fuqua has been the champion behind the development of a Skyland Trail adolescent treatment for 14-17 year-olds, a project that will significantly expand the organization’s service in a new campus. Fuqua made a personal $3 million commitment to the “Building Resilience, Changing Lives” campaign, and he served as one of three campaign co-chairs, helping raise more than $17 million in just eight months.

For Fuqua, his giving focuses on “targeted philanthropy,” looking for areas where there are unmet needs and seeking to fill them. Fuqua is president of both the Fuqua Foundation, which was started by his father; and his own Realan Foundation, named for him and his younger brother Alan, who died in a plane crash when he was only 18-years-old as a recognition that “he was part of the family.”

Since Fuqua moved back to Atlanta from California in 1987, he has been involved in a host of civic initiatives. He is a lifetime trustee of the Atlanta Botanical Garden, and he co-chaired their third capital campaign. He and his family also have been deeply involved at the Emory University’s Brain Health Center. And Fuqua serves on Agnes Scott College’s board of visitors.

Other multi-generational winners have been Michael C. Carlos in 1992, and Chris Carlos in 2016.

National Philanthropy Day also will honor Dave Stockert, former CEO of Post Properties, as the Volunteer Fundraiser of the Year for his work benefiting Holy Innocents’ Episcopal School. As board chair, Stockert led the largest campaign in the school’s history. He also chairs the advisory board of the Metro Atlanta YMCA.

Kate Atwood will be recognized as the Philanthropic Leader of Tomorrow. Atwood founded Kate’s Club, a nonprofit that provides support to children and teens facing life after the death of a parent or sibling. Atwood also served as executive director of the Arby’s Foundation. And she is now executive director of ChooseATL, an initiative of the Metro Atlanta Chamber to attract and retain the next generation of top talent.

Atlanta now has a local chapter of Conscious Capitalism, a growing movement that encourages companies and their executives to run more conscientious enterprises focused on the greater good. 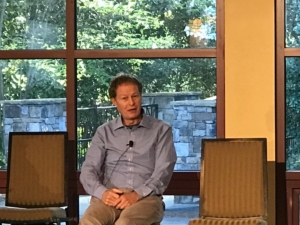 On April 11, one of the national co-founders of the movement — John Mackey — spoke of how businesses can reframe how they operate. Mackey is the co-founder and CEO of Whole Foods, which has recently merged with Amazon.

Mackey spoke at an April 11 breakfast meeting of Conscious Capitalism Atlanta and the Emory Center for Ethics. The mindset of most businesses today is a “win-lose” proposition cloaked in metaphors, such as kill the competition and Darwin’s survival of the fittest.

Instead, Mackey said companies should seek a higher purpose as a way of creating greater value. At Whole Foods, that higher purpose is “to nourish people and the planet.”

“Capitalism is not a win-lose game,” Mackey said. “We should be seeking strategies where everyone can win.”

Incidentally, Sisodia was a featured speaker at the Global HOPE Summit in Atlanta on March 27, when he spoke of a business world that is not serving people in need. “Nearly 60 percent of American households are technically insolvent and adding to their debt loads,” Sisodia said. “Clearly, the way we work isn’t working. Business of any kind can be done in a healing way.” Later he added, “We are hurting a lot of people in the pursuit of profit.”

Sisodia mentioned several companies that practice Conscious Capitalism, including Jabian Consulting, which places its people above all else. For example, it considers the children of its employees as stakeholders. And the company does not do consulting work for out-of-town clients because that would cause its people to be away from their families.

“Because we don’t travel for work, we have more time to cultivate meaningful relationships,” according to the company website. “At Jabian, you actually have time for a social life.”

The Emory program included a panel of business leaders that promoting Conscious Capitalism in their work as well as with their clients. The panel included Cheryl Grice, Southeast advisory managing partner of Ernst & Young; Shane Jackson, president of Jackson Healthcare; and Alexandra Wagner, director of purpose integration for SunTrust Banks.

The 2018 Pink Affair, the leading fundraising event for the nonprofit TurningPoint Breast Cancer Rehabilitation, raised more than $300,000 for its financial assistance program. The March 24th event at the Grand Hyatt in Buckhead helped Turning Point raise money to support 20 percent of its patients who receive reduced-fee and complementary services.