For 20 years, leaders from the Atlanta region have been visiting other North American cities to get ideas on how best to address our metro area’s toughest challenges. The group of 110 leaders just returned from Dallas – and here’s what some of them learned. 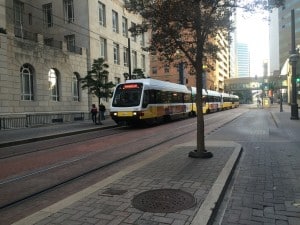 The last time the LINK delegation visited Dallas in 1999, the booming Texas town had just begun building its light rail system – DART. At the time, it had about 20 miles of track in the ground. By comparison, MARTA – Atlanta’s heavy rail system – was nearing 48 miles.

In less than 20 years, DART has 90 miles of rail in its system while MARTA remains stagnant.  But our system does carry twice the number of passengers daily.

The LINK group rode DART to the suburban town of Plano, which has carefully designed its town center to welcome DART without changing its small-town feel.

Leaders from the Atlanta region were impressed – even those who expressed skepticism about rail serving our northern suburbs.

After seeing the Plano model, Johns Creek Mayor Mike Bodker said the introduction of DART didn’t ruin the community, it enhanced it.

The group then took a bus ride to Frisco – a suburban community without DART.  It opted to invest in economic development, rather than transit and, with its concrete parking garages, office buildings and lack of green space, it was not pedestrian-friendly.

The Dallas-Fort Worth Metroplex offered tax incentives to lure businesses to the region – something Atlanta developers would love to see expanded in Georgia.

As we found out in Dallas, the LINK trips offer Atlanta leaders a wonderful opportunity to reflect on how we want our region to grow.