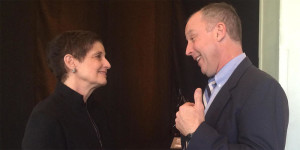 It’s one of the most prestigious awards given in Atlanta, named in honor of late Atlanta Mayor Ivan Allen Jr. He gained national respect in the 1960s for supporting integration in the South.

Allen stood up for justice, despite receiving threats from strangers and harsh criticism from friends and neighbors.

Nancy Parrish, formerly from Atlanta, knows what it’s like to be threatened. Parrish founded “Protect Our Defenders” for military women who have been sexually harassed and assaulted. But many of those women have not gotten justice.

The Pentagon estimates that less than 15 percent of victims in the military report the crime, and of those, 62 percent face retaliation – often ending their military careers.

As the world’s largest employer, the U.S. military plays an important role. It can serve as a primary source of upward mobility for disadvantaged young people – especially women and minorities. It gives people a career and offers higher education – often to those who can’t afford it.

When she accepted the Ivan Allen Prize, Parrish said the military has made great strides in eliminating discrimination for minorities and LGBT recruits.

But she said it has failed fundamentally to address the crisis of sexual harassment and assault.

Parrish says she’ll take the $100,000 that came with her Ivan Allen Prize and donate it to “Protect Our Defenders” in hopes of seeing justice for military women.

Previous Article
Coca-Cola historic marker to be installed at Five Points, at site of first Coke sale
Next Article
‘Round the Ceiling by Kelly Jordan