The Task Force for Global Health – the largest nonprofit based in Georgia – received a significant endorsement this month. The Conrad N. Hilton Foundation awarded the Task Force with its 2016 Humanitarian Prize – which comes with a $2 million grant.

One of Atlanta’s best kept secrets is the Task Force for Global Health – an organization that has been busy saving lives around the world for the past 32 years. 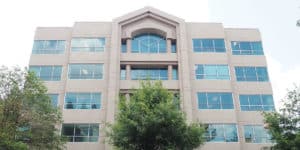 The Task Force for Global Health is going to use new grant money to help launch a $15 million campaign that includes the acquisition of a signature building in downtown Decatur.

But the secret is becoming more widely known with the prestigious $2 million prize from the Hilton Foundation.

The Task Force is going to use the money to help launch a $15 million campaign that includes the acquisition of a signature building in downtown Decatur. This potentially puts both the Task Force and Atlanta in the limelight as a center for global health and development.

Peter Laugharn, president of the Hilton Foundation, said the Task Force has been an unsung hero.

He also said its new building for the Task Force will be a way to shine a spotlight on the life-changing work underway in Atlanta.

It will have a conference space on the first floor where health professionals from around the world will be able to convene to work on a myriad of challenges facing those living in extreme poverty.

Atlanta has numerous organizations focused on global health – the Centers for Disease Control and Prevention, the private CDC Foundation, the Carter Center, CARE, MAP International and MedShare, plus several academic leaders, such as Emory University, Georgia State University and the Morehouse School of Medicine.

That’s not to mention the contributions by entities like Coca Cola Company, UPS, Delta Air Lines, Habitat for Humanity International and the American Cancer Society, among others.

While some of these organizations already work together on initiatives, their efforts could be much stronger if we had a way for all of them to collaborate more closely.

We’re already a leader in global health and development. It’s time for us to wear that crown proudly.