Compared to Detroit, Atlanta is such a new city

Detroit has clustered its sports arena in close proximity to one another in the central business district, as seen is this photo taken in 2013. Credit: Special

After spending a few days in downtown Detroit, I’m reminded of Atlanta’s adolescence.

I’ve spent the past few days walking all over Detroit’s downtown and using its convenient people mover to get one from destination to the next. (It’s worth noting the automated trains come every three to four minutes.)

At every corner was a prominent building with artful masonry from top to bottom. From the Penobscot to the Dime to the Guardian buildings, and even the Detroit Public Library, city dwellers are treated to one architectural delight after another.

Detroit has clustered its sports arenas in close proximity to one another in the central business district, as seen is this 2013 photo. Credit: Special

The downtown area, much like Atlanta’s, holds much promise. The city is also building a streetcar. Downtown Detroit is a real estate professional’s heaven, provided the city finds a way to rebuild its population.

I’ve lived in downtown Atlanta for the better part of a decade, most recently in a century-old building. The hardwood floors in my loft are scarred from once serving as the foundation for a department store’s storage rooms. It’s one of the few buildings downtown – or even in the city – with a story to tell.

In Atlanta, new flats and condos are popping up all over town, particularly around the Atlanta BeltLine, but most of them lack originality. Jamestown Properties has done a stellar job in celebrating the rich history of the original Sears building on Ponce de Leon Avenue – Ponce City Market. That’s “PCM” for the in crowd.

Our Kessler’s and William Oliver’s are such a rarity when compared to buildings in other metropolises.

It took me some time to understand the pleas of Atlanta’s historical societies and architecture buffs to save our notable buildings. In a fervor to grow up as a city, we’ve imploded our history, often with little thought. 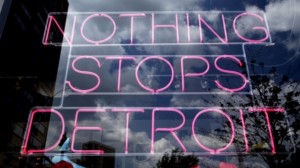 At a time Atlanta was rebuilding after the Civil War, Detroit was earning the nickname, “Paris of the West.” Detroit’s advocates back the city even amid recent tough times. Credit: nreionline.com

We all know how hard the Motor City has been hit by the financial crisis of the late 2000s. Detroit, like Atlanta, has also suffered from race politics and classism. The renaissance of in-town living is best characterized as a generational reversal of white flight. Millennials seemed to occupy nearly every restaurant and bar.

Living in the city proper doesn’t seem to be a consideration for the well-to-do; the Detroit suburbs could easily be placed in north Fulton. The young and scrappy are the ones willing to bet on the city.

Our buildings in Downtown Atlanta have dozens of empty street level retail shops. I bet if the city would be willing to bet on young entrepreneurial talent, we could accelerate the growth of Atlanta’s downtown. And there’s no time like the present to do so. We’ll have a new sports arena in less than two years, Underground Atlanta will soon undergo a redevelopment, and Georgia State University is clearly committed to the city center.

The renaissance of Atlanta’s downtown could also be seen as a traffic solution to a car-choked Midtown and Buckhead. Or even to the eastside towards Inman Park. Downtown is accessible by the major public transit providers, in addition to the Atlanta Streetcar and a bourgeoning bicycle network. MARTA’s Five Points Station would undoubtedly have a different look and feel with a critical mass of individuals wining, dining, shopping and living in the area.