A Fulton County board gave preliminary approval Tuesday to property tax breaks worth a total $11.5 over 10 years to developers in Grant Park, Atlantic Station and Downtown.

The would-be builders of a mixed-use development beside the BeltLine, and of a double-branded hotel in Atlantic Station, both told the Development Authority of Fulton County that they have to put in deep, costly parking decks. And Downtown, nobody’s really looking to lend for a proposed student housing tower unless maybe the county offers a property tax break, said its would-be builder.

It’s a common and usually successful approach from developers: to argue that their planned buildings will provide jobs or a boost to the tax base — but that it would take a property tax break to bring the visions to life.

The development by Middle Street Partners at 1015 Boulevard would bring about 323 homes and 5,000 square feet of retail to a spot on the south BeltLine where there’s now an old cold storage facility. The developer is asking for a property tax break worth $3.3 million over 10 years.

Middle Street Partners is arguing that the sloped lot is adding costs to the development, as is the cost of removing the old cold storage. They also say that in compliance with the will of the neighborhood, they’re willing to put in pricey underground parking instead of something visible.

But questioned by a few skeptical board members, Johnson Bazzel, senior partner at Middle Street Partners, said that demand for housing in that submarket is incredible and he also predicted that the site would be developed in as little as five years — or 10 at the most — if his company’s proposal doesn’t happen.

In compliance with Atlanta’s inclusionary zoning rules, Middle Street is proposing 48 units for just a bit below market rate. Going by 2019 numbers that are updated annually and that vary with family size, “affordable” means rent of something like $1,200 a month for a one-bedroom. Bazzel also said the designers have worked hard to create a community gathering location out of the non-residential space.

Board member Kyle Lamont voted against the property tax break.

“This is at the BeltLine entrance at Boulevard in Grant Park, which is a booming neighborhood with tons of development,” Lamont said. I’m not seeing where the true community benefit is [anything] other than a 5,000-square foot space where we don’t know what the tenant will or may be.”

Board member Brandon Beach did support it, saying that construction and material costs are going up because of COVID-19.

By a 6-3 vote, the board agreed with Beach. Like all three Atlanta deals approved Tuesday, it’ll have to come back for a second vote. No second-vote dates have been announced. 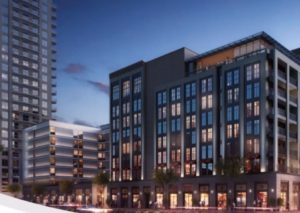 The conversation was similar, but shorter, over a property tax break worth $3.8 million over 10 years to Peachtree Hotel Group, which wants to build and open a dual-branded SpringHill Suites and Tapestry by Hilton hotel at 17th Street and Atlantic Drive.

It’ll bring customers to Atlantic Station shops, provide lodging for business travelers, employ about 127 people, pay taxes and even have a rooftop bar, said the company representatives who came to the DAFC meeting.

This subsidy is “intuitively justifiable” because of the cost of building a parking deck, said Gary Mongeon from Bleakly Advisory Group, who did a study on the hotel plan for the developer. And besides that, he pointed out, earlier Atlantic Station construction got deeper subsidies. (Atlantic Station is a special zone where the city offered that help to jumpstart building on the old steel mill site.)

Board member Tom Tidwell pushed back on the abatement, though what he said echoes criticism of property tax abatements generally.

“We should not be giving an abatement just because other people got them,” Tidwell told his colleagues. “The issue is not how much tax revenue this project will generate. This is obviously going to generate a lot of revenue. The question is whether they will build this but for the abatement.”

That is, could the community get a hotel or an apartment — with all its jobs and taxes — without giving a property tax abatement?

But most of the board was won over by the developer’s point of view. Only Tidwell voted against the abatement.

By the same vote, the board also gave the preliminary OK to a property tax break worth $4.4 million over 10 years to Reese Meyer at 111 JWD, which is planning a 742-bed student housing tower at 111 John Wesley Dobbs. 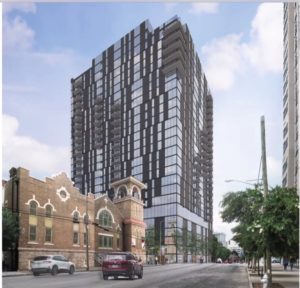 A sketch of a proposed student housing tower at 111 John Wesley Dobbs (Special via slides provided to DAFC.)

“It’s been challenging getting a construction loan … We still don’t have one. We think we need this inducement to get one,” said Jim Meyer, one of the developers.

With the pandemic-driven move by many colleges to online classes, there’s strain on the student housing finance market, to say the least.

From January 2019 through January 2020, the Development Authority of Fulton County and the city of Atlanta’s development authority together granted preliminary or final approval to property tax breaks worth nearly $200 million over 10 years in the city of Atlanta alone. The subsides happened mainly in hot neighborhoods like Downtown, Midtown and the Eastside BeltLine.

Atlanta’s development authority has since hit the brakes on that activity, but Fulton’s authority can also work within Atlanta’s city limits.

Each of the tax abatements is done via “lease-purchase bond.” That means the public entity will take control on paper of part of the property, and pass its property tax savings on to the beneficial owner.

The next regular DAFC meeting is scheduled Sept. 22.