A tribute to former Atlanta Mayors Ivan Allen Jr. and Maynard Jackson will be more abstract than figurative.

The Atlanta Legacy Makers curatorial committee has selected a design presented by the team of Point Office, artist William Downs and the architectural firm of Lord Aeck Sargent for the iconic corner of Peachtree Street and Auburn Avenue.

The idea for the memorial emanated from the book “Where Peachtree Meets Sweet Auburn” written Gary Pomerantz about the separate yet intertwining lives of the Allen and Jackson families – and how that helped describe the evolution of Atlanta.

The City of Atlanta, working with Central Atlanta Progress (CAP), held a design competition and received 16 submissions. A curatorial committee narrowed those down to four finalists before eventually selecting Point Office. 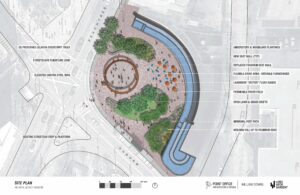 An aerial view of how the design of how the Atlanta Legacy Makers monument will fit on the site on the northern end of Woodruff Park (Special: Central Atlanta Progress)

“Ultimately the strength of the winning proposal was about creating a strong representation of the memorialization of the two men, their families and the community,” said Tristan Al-Haddad, chair of the curatorial committee and creative director of Formations Studio “It blurs the line between architecture and a mural.”

Fredalyn Frasier, CAP’s project director of planning and urban design, said there was a scorecard used to select the winning design.

“It really came down to how they incorporated an artistic component into a monumental piece,” Frasier said. “It’s not a statue. It’s a monument that’s worthy of that location. Perhaps there will be some element in there which is a depiction of the two men. But we’re relying on text to tell their story.”

The proposals of all four of the finalists were interpretive rather than figurative, Frasier said.

Clark Tate and Matthew Weaver, principals with Point Office, shared their vision behind the design.

“We wanted to create a monument that you inhabit rather than gaze upon,” Tate said.

The design is a round open-air structure made of weathering steel that is 50 feet wide in diameter and 9 feet high. A circular mural by Downs, an internationally-known artist, will adorn the interior of the circular structure depicting the evolution of Atlanta from the 1960s to the 1990s, when the mayors were in their prime.

The open “walls” holding up the structure also will have text about the two mayors and the book: “Where Peachtree Meets Sweet Auburn.” 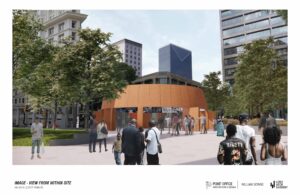 People will be able to look up beyond the ring and view a skyline that was largely built during the lifetimes of the two mayors.

“The top rim of the ring will really frame the city,” Tate said. “Story-telling in the round is something that has existed in Atlanta with the Cyclorama.”

In the center of the ring on the ground will be a brass medallion that will have rays of text pointing to places showing how the two mayors had helped the city evolve.

The area around the ring will be landscaped, and there will be seating for those who want to contemplate.

Frasier said CAP will lead the effort to raise money to build the memorial, and the estimated cost of the project will be between $3 million and $3.5 million. The city is expected to help with infrastructure improvements, which include removing any steps and opening up that space to be easily accessible to the public.

Samara Minkin, who oversees special projects, public arts and culture for the City of Atlanta, said the curatorial committee had “meaty discussions of what a monument is today” and how people interact with public art. 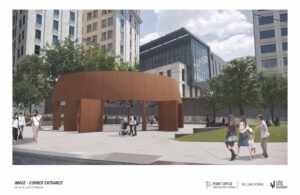 “It was an opportunity to approach a public monument in a whole new way,” she said.

The public, however, was not able to participate in the design selection of the winning team.

“The COVID pandemic really decreased the involvement for public engagement,” said Minkin, who said there will be an opportunity to tweak the final design.

CAP is planning an event in early October when it will unveil the final concept and have a program with leaders behind the idea of creating a monument to the two Atlanta mayors.

“It’s not just an historical, figurative narrative of these two men,” Al-Haddad said. “This is a new, contemporary way of looking at two men – looking back and looking forward. It’s a way of drawing people in.”

Then Al-Haddad added: “A sculpture of two guys is really unengaging in my opinion.”