The cost of commercial construction grew at a faster rate in metro Atlanta than in any of the 14 cities included in a new report by CBRE, a global real estate company.

The cost of commercial construction for projects such as SunTrust Park has increased at a faster rate in metro Atlanta than in any other major city evaluated in a new report by CBRE, a global real estate company. Credit: AP via atlanta.braves.mlb.com

Atlanta notched a 3.8 percent increase in construction costs in the period from January 2015 to January 2016, the CBRE report showed.

The CBRE report addresses some perplexing issues that have appeared in market reports by the Atlanta District of the Federal Reserve. The report does not offer policy recommendations.

The Atlanta Fed’s Beige Book of anecdotal reports on the southeast regional economy consistently have included remarks from employers who say they face persistent shortages of skilled construction workers and truck drivers.

CBRE’s report notes that the number of construction workers in metro Atlanta has shrunk by 20 percent, even while wages have increased by 13 percent.

CBRE based its work on a number of reports from entities including the U.S. Bureau of Labor Statistics, RSMeans, and CBRE analysis. 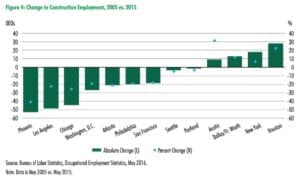 Metro Atlanta lost 20 percent of its construction workers during the Great Recession, according to CBRE. Credit: CBRE

Of note, local labor rates are just two-thirds of the national average.

The only major markets that pay less than Atlanta are Dallas/Ft. Worth and Austin. Both those regions pay average rates just below $25 an hour.

CBRE analysts determined that rates for construction workers rose out of sheer necessity to get enough hands to bid on jobs:

CBRE analysts determined the five key take-aways in their evaluation of change in construction costs are: