Vine City residents are finally about to get the park they’ve been promised since 2012.

The 16-acre Rodney Cook Sr. Park and its pond will soak up flash floods while doubling as a perfectly normal park with places to play and walk and do Instagram and all — just like Historic Fourth Ward Park on the BeltLine. It should open this fall.

But what’s still unclear is when Cook Park will fill another of its roles: uplifting the neighborhood’s and the city’s civil rights legacy. 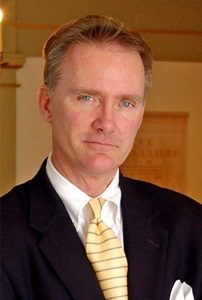 To do that part, Atlanta City Council has passed legislation that authorizes Mayor Keisha Lance Bottoms to negotiate a partial park lease for 50 years to the National Monuments Foundation, the nonprofit founded by Rodney Cook Jr., the originator of a monumental idea.

The NMF is promising to raise money to build sculptures, monuments and buildings elevating the city’s civil rights leaders and their work.

But the complex would be a much bigger project than anything NMF has been able to pull off in Atlanta.

Cook Jr. and NMF are behind some Atlanta landmarks like the Prince of Wales Olympics Monument in Downtown and the Millennium Gate — the arch in the middle of 17th Street in Atlantic Station.

For the park named for his father, Cook Jr. first proposes sculptures, which may include any of 18 named leaders, alphabetically, from Reverend Ralph David Abernathy to Ambassador Andrew Young.

In fact, the sculpture of Congressman John Lewis is finished already.

Then there are the first two buildings, the 115-foot-tall Peace Column and the Peace Pantheon Building, would run about $10 million each, Cook said, in an interview a few weeks after Council passed the August legislation.

The next phase would include the Ambassador Andrew Young Peace Center and an art museum with pieces from the late collector of African-American art, Bill Arnett.

Even fine details of the plans are set in Cook’s mind already.

Like a sculpture of Martin Luther King Jr. in clerical robes instead of the normal midcentury suit.

Or the peace column which Cook said will rest atop a pedestal containing a long gallery divided into two sides by a column screen. One side of the gallery would hold the King family library that’s now in the Millennium Gate. The other side would hold the library of C.T. Vivian. Casual visitors could see the book collections through glass; scholars could consult them.

An elevator would whoosh people to the top of the column to gaze on Sunset Avenue and environs, home grounds to people like the King family, W.E.B. DuBois, Maynard Jackson and Julian Bond.

Except for the books, the site won’t be so heavy on artifacts.

“This is going to be heavy on virtual reality and technology to tell the story,” Cook said.

(Separately, NMF has another idea: a freedom bell tower atop Stone Mountain that would include a laser display wider than the Perimeter.)

At-large Atlanta City Councilman Michael Julian Bond sponsored the legislation this year authorizing lease negotiations. He hopes a lease is done quickly, that the building work starts quickly, and that maybe even an office of the Nobel Foundation will move in.

“It’s an instant destination that really cements Atlanta’s place in the world as the home of civil rights and the pursuit of noble achievement,” Bond said. 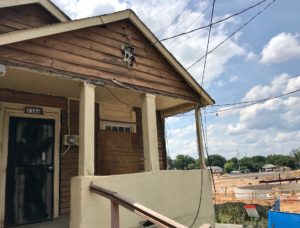 A dilapidated house by the Cook Park construction site in 2019. The park represents an investment in a neighborhood that has, in parts, been left behind by prosperity. (File/Credit: Kelly Jordan)

The park might not have ever happened but for Cook, NMF and the park’s champion on Atlanta City Council, the late Councilman Ivory Lee Young Jr.

Back in 2012, Young urged the city to approve a partnership with NMF, which had promised to develop the park — and monuments and even offices, including one for an office for a foundation led by the Prince of Wales — at a cost of $55 million.  And that’s what City Council approved.

But NMF didn’t met the deadlines in that 2012 legislation — a deadline for raising the first half of the money, deadlines for getting phases of the construction done.

Cook said the timeline has turned out longer than he’d anticipated that because of factors beyond his control, like the illness and death of Councilman Young, and the city watershed department needing to do millions of dollars of water control works. And the involvement of the Trust for Public Land.

That is, TPL would — and did — get the park built. TPL will host a park ribbon-cutting soon, after having raised $13.4 million, including $2.7 million from the Blank Foundation for it.

The NMF would work on the monuments.

But one of the key funders of the park — the Blank Foundation — has publicly expressed skepticism of NMF’s ability to raise the kind of money it would take for the monumental plans. Back in 2019 and early 2020, when he was senior vice president at the Blank Foundation, Frank Fernandez said as much to the Atlanta Journal-Constitution and to City Council in public testimony. (Fernandez is now president and CEO of the Community Foundation of Greater Atlanta.)

Cook said that NMF  is “just finalizing things with the mayor and the Law Department, getting our green light to fast track so we can get the column finished.”

However, in August, the city’s Law Department opined only that the legislation was in order to legally accept the statues as gifts to the city. They were not ready to opine on the legality of the proposed ground lease.

Everyone seems to support statues of civil rights legends, said District 6 Councilwoman Jennifer Ide at the August Council meeting. But she was among the Council members who also said there are complex legal questions about leasing and procurement.

Leasing public space to private entities has kind of a fraught history in Atlanta. Grant Park and Piedmont Park are public property, but large parts are behind paywalls: the zoo and the botanical garden.

But Cook isn’t into public fees, except maybe some nominal museum admission fees.

What he wants to build has to be for the use of the public. “Or I would be highly opposed to it,” Cook said. “But everything we’re doing is for the public.”

The Council legislation also says that the NMF has provided a “comprehensive financial model” to the city.

But that’s a little fraught too.

In response to an open records request, the mayor’s office said the Finance Department has no such documents, but they were still checking at Parks and Rec. Cook said he had indeed sent financial documents.

Overall, he sounds undeterred by the long timeline.

Previous Article
It’s in Atlanta’s best interest for the CDC to rely on science, not politics
Next Article
Two Black, Democratic women are the face of change in Cobb, Gwinnett counties