Coronavirus emptied the Georgia Legislature — but not before lawmakers shoved just about 100 bills through a bottleneck Thursday.

The Thursday survivals form part of might become law at their next convening.

After procedural votes Friday and a Monday special session to ratify emergency powers for Gov. Brian Kemp, the Legislature is on an indefinite suspension.

But on Thursday, the state House and Senate did a key thing: they sent midyear budget adjustments to Kemp, minus some of the social services cuts he proposed.

And they added $100 million for coronavirus response, to be taken from the state’s rainy day fund. Any money not spent will go back into the fund. The addition brings the budget to $27.5 billion.

Yet to come is consensus on next year’s $28.1 billion budget. Teacher raises of $1,000 to $2,000 are in play, as are smaller raises for folks in high-turnover state jobs, mostly in prisons and child welfare.

The House, mainly with Republican support, OK’d a set of personal income tax cuts and adjustments that should mean the state would forego about $250 million per year.

House Republican leaders have said that would mostly be made up by eliminating an income tax deduction, widening the online sales tax, adding a tax on lodging like Airbnb and more new measures.

But if coronavirus pushes Georgia’s economy into reverse, budget considerations may change. 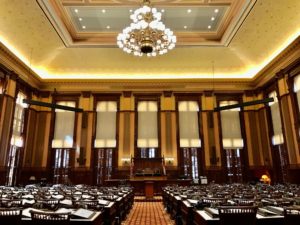 After outcry concentrated around a Smyrna plant, both representatives and senators approved bills to require more transparency around ethylene oxide emissions from Georgia facilities.

Any place that spills or accidentally vents the carcinogenic gas will have to tell state environmental officials within 24 hours, and the state will have to post those reports online. Both Senate Bill 426 and House Bill 927 started out as more modest Republican measures, but were broadened in committee.

Smyrna Democratic state Rep. Erick Allen proposed more testing around such facilities, but his House Bill 938 didn’t make it to the House floor.

The House is also unimpressed with two new power plants in northeast Georgia burning old creosote-laced railroad ties for electricity. They approved House Bill 857, a ban on state permits for such burning. A similar bill in the Senate didn’t make it to the floor.

The ash and traces of toxic minerals left over from burning coal in power plants can still be put in unlined landfills, after the failure of a bill to end that.

But it would cost $2.50 per ton to bury ash, up from $1 now, per Senate Bill 123. That’s the same as it costs to bury household garbage. If it becomes law, it’ll be seen as a win, a modest starter win, by environmentalists.

The state Senate made a modest step on criminal record restriction. Right now, very few Georgians can ask a court to seal their criminal records — it’s mainly for youthful offenses.

Senate Bill 288 would extend that right to ask for record restriction to anyone who’s finished a misdemeanor sentence and then kept a clean record four four years. And records would still be available to law enforcement.

“Georgia is behind the rest of the nation on this,” said Lithonia Democrat state Rep. Tonya Anderson, the bill sponsor.

A bill in the state House would have also applied to many felony convictions, but it didn’t make it to the floor.

One of Kemp’s legislative priorities, a rewrite of the state gang law, divided the House but did barely get passage after being whittled down in committee. Now, House Bill 994 still has critics who say it will lead to unnecessarily long sentences, and supporters who say gangs are terrorizing Georgia and this legislation is helping to stop that.

The film and TV productions that tap the largest film tax credit in the country would need to undergo audits, under a bill passed by the House.

This bill comes after months after a pair of scathing state audits found that there were inadequate controls to make sure film productions aren’t padding their books in Georgia.

Auditors also said that because productions can sell their tax credits, there is an incentive to misstate their spending.

Dollar’s bill doesn’t touch the transferrability of tax credits or impose a cap on them. No such bill appeared or got a hearing. The tax credits were worth about $870 million in 2019.

Right now in Georgia, it’s a felony for a person living with HIV to fail to disclose their status to their sexual partner. A House bill would put an end to that, except in cases of someone intentionally trying to infect another.

The federal government has noted that many state laws were written far before current antiretroviral therapies were developed and that the laws criminalize behavior that isn’t risky.  Supporters say Georgia’s House Bill 719 helps lift an HIV stigma so strong that some people don’t even want to get tested. 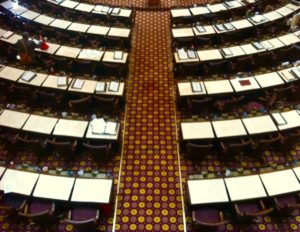 Not everything that had dedicated (or deep-pocketed) supporters got through the Thursday bottleneck. Sure, anything can come back to life with parliamentary maneuvering, but the odds are very bad for things that haven’t gotten a critical mass of support.

Neither the House nor the Senate took up legislation to legalize horse race wagering, casinos or sports betting. That’s despite an unprecedented push for mobile sports betting by Georgia’s major league sports teams.

And though many high-ranking state Senators supported it, a chamber- and business-backed set of rewrites to jury trials and awards won’t occur. Fans of Senate bills 390 and 415 call them “tort reform” and say Georgia’s courts are unfairly stacked against businesses. Critics say that Georgia is business-friendly enough, and businesses need to be responsible too when they’re negligent.

Neither one got through the lawyers — the first got gutted in the Judiciary Committee and the other got tabled (set aside) on the Senate floor, where there were several angry lawyers.

The state Senate was also uninterested interested in the restoration of voting rights for people who have completed certain felony sentences but are still on probation or parole. State Sen. Harold Jones II, an Augusta Democrat, has filed bills and made study committee arguments to give voting rights to that group He made a last-ditch push for his Senate Bill 414 at a press conference earlier this month, but nobody was listening.