Cousins Properties bullish on job growth in Atlanta area as it expands in Texas; Billy Payne to leave board

Metro Atlanta has regained all the office jobs it lost during the great recession and job growth is expected to exceed the national average, Cousins Properties, Inc. states in its annual financial report to the federal SEC. 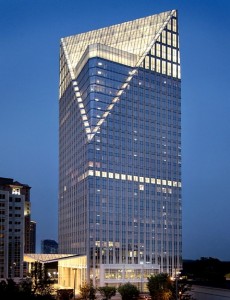 The success of Terminus 100, a Buckhead property that Cousins Properties reports is 98.3 percent leased, is one reason Cousins is bullish on metro Atlanta. Credit: jamco-inc.com

In other Cousins news, Billy Payne – credited with helping to bring the 1996 Olympic Games to Atlanta – is to leave the Cousins board of directors after its annual board meeting May 6. Payne, 66, was elected to the Cousins board in 2006 and remains chairman of the Augusta National Golf Club.

This is Cousins’ assessment of the metro Atlanta market, as stated in the 10-K Form the company filed Feb.13 with the federal Securities and Exchange Commission:

Cousins outlook is an outlier when compared to other forecasts of regional office job growth, and even in the actual market.

For example: No significant office projects have been started in five years; the deal in 2013 to get Carters Inc. to move to Buckhead involved at least $30 million in sweeteners, according to terms outlined in the $350,000 incentive grant provided by Atlanta; the region’s office vacancy rate is at 20.4 percent, which is more than a third higher than the national average vacancy rate of 14.9 percent at the end of 2013, according to real estate services company CBRE, Inc. 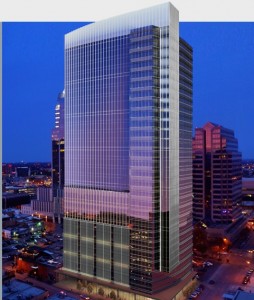 The Colorado Tower, in Austin, is the only office project Cousins Properties is developing. Credit: coloradotower.com

Last month, the Atlanta Fed’s beige book reported that job growth in the southeast was “muted” to “modest,” depending on the sector: “Rather than adding to payrolls, businesses reportedly continued to rely on technology to enhance output.” CBRE cautioned that tenants may need less space in the future if they require employees to work less frequently in the office.

Nonetheless, the views expressed by the Atlanta-based real estate firm certainly warrant attention. Cousins has beaten the odds since the great recession.

In the 6.5 years since Lehman Brothers downgraded Cousins stock, in December 2007, the investment bank has declared bankruptcy. In the four years since Larry Gellerstedt III has been president/CEO, the company increased its equity market value from $422 million to over $2 billion.

Cousins has sought to diversity its risk by selling non-core assets and acquiring developments in other markets, particularly in Texas. Cousins has boosted its footprint in Texas eightfold in just the past year.

The only office construction Cousins listed in its most recent 10-K is in Texas, the Colorado Tower in downtown Austin. This space is being absorbed: A quarter of the 372,000 had been leased by the end of 2013, an additional quarter has been leased this year, and the building is to open at the end of 2014.

Cousins paid $230.9 million for Post Oak Central, a Class A office complex in the Galleria area. The seller was an affiliate of J.P. Morgan Asset Management.

Cousins paid a total of $1.1 billion to acquire properties in Houston and Fort Worth – Greenway Plaza in Houston, a 10-building development with 4.3 million square feet; and 777 Main, an office tower in Fort Worth with 980,000 square feet.

In this new portfolio, Houston has become Cousins’ cash cow.

Metro Houston provided 49 percent of Cousins’ net operating income in the final quarter of 2013. Metro Atlanta provided 32 percent, according to the 10-K.

To succeed Billy Payne on the Cousins board, Cousins CEO Gellerstedt has nominated Donna Hyland, 53, president/CEO of Children’s Healthcare of Atlanta. If elected, she’s to serve on the Audit Committee. A proxy statement that announced Hyland’s nomination states: