Now they’ve voted to ask the mayor in her next budget for something yet unknown: a millage rate “consistent with effectively running government in the aftermath of COVID-19 pandemic.”

That’s because no one knows how long the virus will beat down the economy or what it might cost local governments.

Right now, cities, counties and the state are thinking about what to shut down, how to find masks and tests for medical personnel, how to fight rumors.

But if the economic shutdown triggers a long, deep recession, cities and counties everywhere can wave goodbye to the relatively easy budgets of the last few years. And that thought is already creeping in at the edges of some local government meetings. 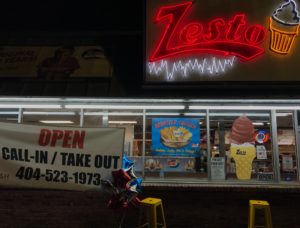 Cities and counties pay their cops, fuel their garbage trucks and even fund some of their public health operations with money mainly from two places: sales taxes and property taxes. Schools get substantial state and federal funding but still also depend mainly on local taxes.

When that money doesn’t come in, local governments have to think about raising taxes or cutting services.

The speed of the economic collapse is unprecedented, said David Sjoquist, economics professor at Georgia State University and a local government finance expert.

But it’s yet unclear how deep and long the shutdown will be, how many people will be unemployed and how it might compare to recessions the U.S. has seen before.

“If we start rebounding in a month, we won’t see much” government fiscal impact, Sjoquist said.

Sjoquist said that this is not like the 2008-2009 Great Recession, when people were losing their homes and the and banks tottered atop bad loans. This time, he said, the the fed is going to work hard at making sure the finance sector isn’t damaged.

The unemployment rate tied to The Great Recession got as high as about 10 percent, according to the U.S. Bureau of Labor Statistics.

The last recession before that one came in 2001, when unemployment hit about six percent.

Of course, I spoke to Sjoquist on Friday, two days before the St. Louis Fed chief told Bloomberg that he thinks unemployment could hit 30 percent.

Georgia has not yet reported new recent unemployment claims that include COVID-related layoffs. That’ll happen Thursday. 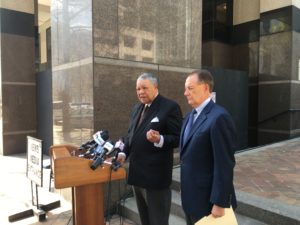 Fulton County Commission Chairman Robb Pitts (at podium) said Friday that Fulton is not considering raising the millage rate at this time and that Fulton is in good financial health. Credit: Maggie Lee

Other states are starting to report new unemployment claims, like Ohio’s leap from about 6,500 new claims during one week at the beginning of the month to about 78,000 in a week toward the end of the month.

So back at the local government level, the Fulton County Commission voted Wednesday to end payment processing fees charged by the county tax commissioner.

Its supporters said it was a relief — though small — for individuals. Others voted against it, saying that the $3 million total it raises may come in handy for the yet-unknown cost of COVID-19 response.

Two days later, Fulton County Commission Chairman Robb Pitts said the county is not considering raising the millage rate right now, and he pointed out that Fulton is in a strong financial position.

Fulton, like Atlanta and the state of Georgia, all have strong bond ratings, meaning that financial markets think they’re sound borrowers. It’s a good proxy for fiscal health.

As for Atlanta and its millage rate, Council has to send a list of budget priorities to the mayor every year. Their draft document last Tuesday proposed Mayor Keisha Lance Bottoms go with a “full rollback” of the millage rate.

That is, set a lower millage rate to offset the rising value of property so that a typical person’s property tax bill stays roughly the same. 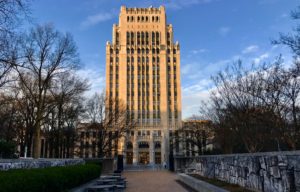 “Given where we are with economic and fiscal uncertainty I would recommend that the reference to full rollback of the millage rate be stricken at this time,” said District 5 Councilwoman Natalyn Archibong, who proposed the change.

“We just don’t know where we are and I think that that’s something that we need to leave on the table,” she said.

But if the city is feeling financial pain, that means voters are going to be in pain too, and maybe leaning on them for money isn’t the thing to do.

“Given the enormous destruction of public and private wealth what are people supposed to pay higher property taxes with?” said District 7 Councilman Howard Shook.

Council approved Archibong’s amendment, but also another one from District 8 Councilman J.P. Matzigkeit: that the city look at cutting expenses first, and only second at raising new revenue.

“We put this list together in a different time,” Matzigkeit said, “even though it was a short time ago.”

Previous Article
View from Peachtree
Next Article
He had strong beliefs