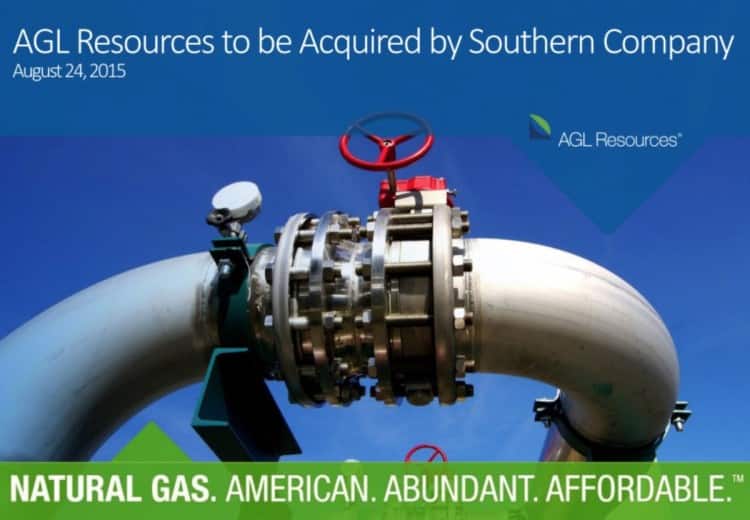 Southern Co. is to acquire AGL Resources in a deal expected to close in the second half of 2016. Credit: sec.gov

Southern Co. plans to take on so much debt to buy AGL Resources that its faces the biggest potential financial nightmare of any of the three utility holding companies that are buying gas companies, according to a new report from Moody’s Investors Service. 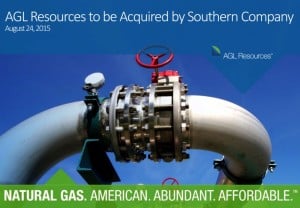 Southern Co. is to acquire AGL Resources in a deal expected to close in the second half of 2016. Credit: sec.gov

This is how analysts characterize Southern’s plan:

The biggest issues analysts cite in this wave of acquisitions is the means by which the holding companies are expanding – through significant levels of debt. Their thoughts on this scale of borrowing to finance acquisitions is right there in the first paragraph of the in-depth report on regulated utilities:

In addition, the acquisitions by all three holding companies don’t offer much opportunity to reduce operating costs, the report contends. AGL stated as much in a filing with the Securities and Exchange Commission – AGL will retain its board of directors and leadership team, and maintain its corporate office in Atlanta.

Analysts at Moody’s reviewed the potential for cost cutting by Southern and the other two companies and observed: 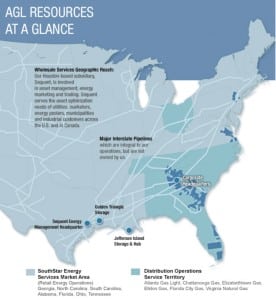 AGL Resources has 80,000 miles of natural gas pipeline, according to an SEC filing. Credit: sec.gov

The report is not all doom and gloom for Southern. Analysts observe that Southern will benefit from diversifying its core business.

Today, 100 percent of Southern’s revenues come from selling electricity. Once the AGL deal closes, Southern will collect 77 percent of its revenues from electricity and 23 percent from natural gas, according to the Moody’s report.

In this scenario, gas will be Southern’s third-largest revenue source, behind Georgia Power Co. in the No. 1 spot and Alabama Power Co.

The deal also will provide Southern with entirely new gas distribution, transportation, and storage revenue streams, according to the Moody’s report.

Southern’s geographic footprint will expand from four states to seven states, given that AGL delivers gas in states where Southern doesn’t sell electricity.

Finally, the acquisition of AGL will enable Southern to grow in strategic ways, the report states. AGL is expected to add nearly $2.4 billion in distribution and pipeline investment through 2017.