The extent of the affordable housing challenge in exurban Atlanta has become evident in Dawson County, where 25 miles north of Alpharetta an apartment complex is to be built with tax incentives near a jobs-rich outlet mall. 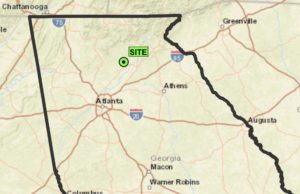 The development in Dawson County of an affordable housing project points to a scarcity of residences affordable to households earning the incomes of shop clerks. Credit: Landbridge Development via DCA

Rental rates are to range from $550 to $850 a month. Ten percent of units in the 80-unit complex are to be reserved for disabled residents, according to a market analysis conducted for the Atlanta-based developer, Landbridge Development, LLC., and filed with the state Department of Community Affairs.

Dawson County isn’t the type of place where housing costs may be expected to be a challenge. A retail supercenter, North Georgia Premium Outlet, is both a regional destination and jobs center. Just over 1,100 second homes serve an affluent seasonal and recreational population. Jobs in retail or manufacturing occupy half the workforce, according to the marketing report.

But the pending apartment complex provides a vantage point into the shortage of rental housing that’s affordable to those earning the prevailing wages.

A look at two reports shows: 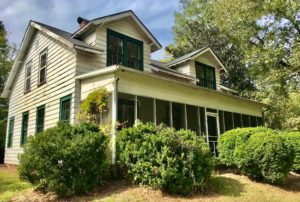 A shortage of rental homes in Dawson County has fueled high rental prices. Dawson and other North Georgia counties have a plethora of vacant houses, such as this one, that are not for rent. Credit: Kelly Jordan

As a result of these and other findings, the report determined the project would fulfill a need and not cannibalize other LIHTC-funded projects:

The unemployment rate in Dawson County has returned to a pre-pandemic level and stood at 3.6% in November 2020, according to a report by the Federal Reserve of St. Louis. Credit: U.S. Bureau of Labor Statistics via St. Louis Fed

The plan calls for the Peaks of Dawsonville to be near the intersection of Ga. 400 and Ga. 53, which leads west to Dawsonville and east to Gainesville. The apartment site is in the northeast corner of the intersection in an area being developed into a commercial center.

A $10 million bond to help pay for construction is to be issued by the Development Authority of County. The bond received a top investment grade, Aaa/VMIG 1 in a Jan. 21 rating action issued by Moody’s Investor Service.

Peaks of Dawsonville is to provide 80 units in five two-story structures on a 14.3-acre site. A 1,735 square-foot community center is to be on site. The mix of units is to include: three bedrooms, 28; two bedrooms, 40; one bedroom, 12.

The project is intended to serve households earning 50% and 60% of the area median household income, which is established by the federal Department of Housing and Urban Development.