Activists nationwide are getting new publicity for calls to “defund the police.”

Many organizations espouse the idea, or parts of it. Those include Campaign Zero, 8 Can’t Wait, the National Police Accountability Project, and a World Without Police. One general idea is that well-funded social service personnel can and should handle many of the calls that police now handle. Another general idea is that police shouldn’t use military equipment. Some national groups call for things that Atlanta police already do, like wear body cameras. And some groups, yes, call for  abolition of police departments.

In metro Atlanta, the abolitionist Racial Justice Action Center and allied groups like Women on the Rise and the Solutions Not Punishment Collaborative do have the attention of some in Atlanta City Hall and other halls of power. The activists have helped move policies like closing the Atlanta jail and setting up a pre-arrest diversion initiative in Fulton County. 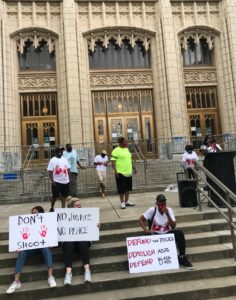 SaportaReport spoke to Director Xochitl Bervera to ask what “defunding the police” means for RJAC.

SaportaReport: What does ‘defund the police’ mean? Does it mean to abolish cops, arrests, prosecutors, all of that?

Xochitl Bervera: As an abolitionist organization, when we say ‘defund the police’ or ‘defund the jail’ we are asking the city or state to move resources, both funding and personnel, out of the racially biased and punitive failure of a criminal justice system and into the kinds of supports and services that actually keep communities safe.

I think it’s important to note that the call for defunding the police didn’t pop up overnight. It actually comes from decades of organizing in Black communities and communities of color, who’ve been trying to expose the reality that we have a system that we call a ‘public safety system’ that actually undermines many peoples’ safety and well-being.

I think there are two good examples to help people see this. First, the massive investment into the criminal system is at the direct expense of health and wellness for people. So, for example, millions of children go to school where there are many cops, but not one nurse, right? Or many cops and not one counselor, not one art teacher.

[Second,] here in Atlanta, we spent $32 million for years and years to operate a jail that locked up people for spitting on the sidewalk … Meanwhile, children are living on blocks that have no streetlights, where there is not enough mental health care, where the school system is crumbling.

SR: Are there places that are doing practices like this already, some some place you look to as doing the right things?

XB: I will say that communities most at risk of police violence have been practicing how to keep one another safe without the police for years. Many segments of the Black community, undocumented people, indigenous people, trans people. There are lots of practices, lots of communities who have forms of accountability, restorative justice and transformative justice that do not rely on a police force and a punitive jail and incarceration system in order to maintain safety.

There are places that have recognized that it is time to build a public safety system from the ground up. One place that disbanded their entire police department is Camden, New Jersey. I think the efforts in the city of Atlanta led by formerly incarcerated women, to close the jail and have those resources reallocated to community is another example of trying to start over.

And then I think we can look internationally because there are many places in the world, many countries in the world who spend less than half of what we do on on law enforcement and have lower crime rates, much, much lower incarceration rates, much higher health and wellness rates. 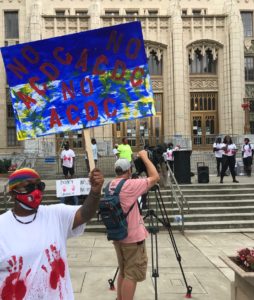 SR: what do you say to people who think this sounds scary, who say they like the police and they find the police to be helpful?

XB: I think it requires us to take a step back and look at the whole picture, and from a different point of view. Obviously George Floyd was not safe from the police.

Even here in the city of Atlanta, look at the cases that have not received the attention they deserve. Oscar Cain, Alexia Christian, DeAundre Phillips: there are eight Atlanta residents who died at the hands of Atlanta police departments since 2017*. And a number of them are cases that were never fully investigated. Oscar Cain was shot dead by an officer who failed to turn on their body cam. That officer is still on the force. There are cases in which the officer wasn’t following procedure, and somebody is dead, yet they are still an officer on the street.

I think while some people’s experience with individual police may be helpful, or they themselves for whatever reason, (maybe they live in a certain neighborhood, or they’re a certain race,) they get help and support from the police, I think this is a moment where we look to what happened in Minneapolis and what happens here in our own city and say … we cannot deny any longer that the police have a deep, deep history of racism.

And that means that many of our community members are actually at risk from the very people who are supposed to be keeping communities safe.

So it might be a moment for some people who need to say, ‘Wow, my experience with police officers has been a helpful one. But I now can see plainly and on videotape that other people are treated very, very differently. And I think we all need to say that we are collectively responsible for making sure we have a public safety system that keeps us all equally safe.’

SR: And can we talk about either the city of Atlanta or metro Atlanta, whichever or both? What would defunding the police look like here? What are some specific policies or things you’d like to talk about about our local situation here? 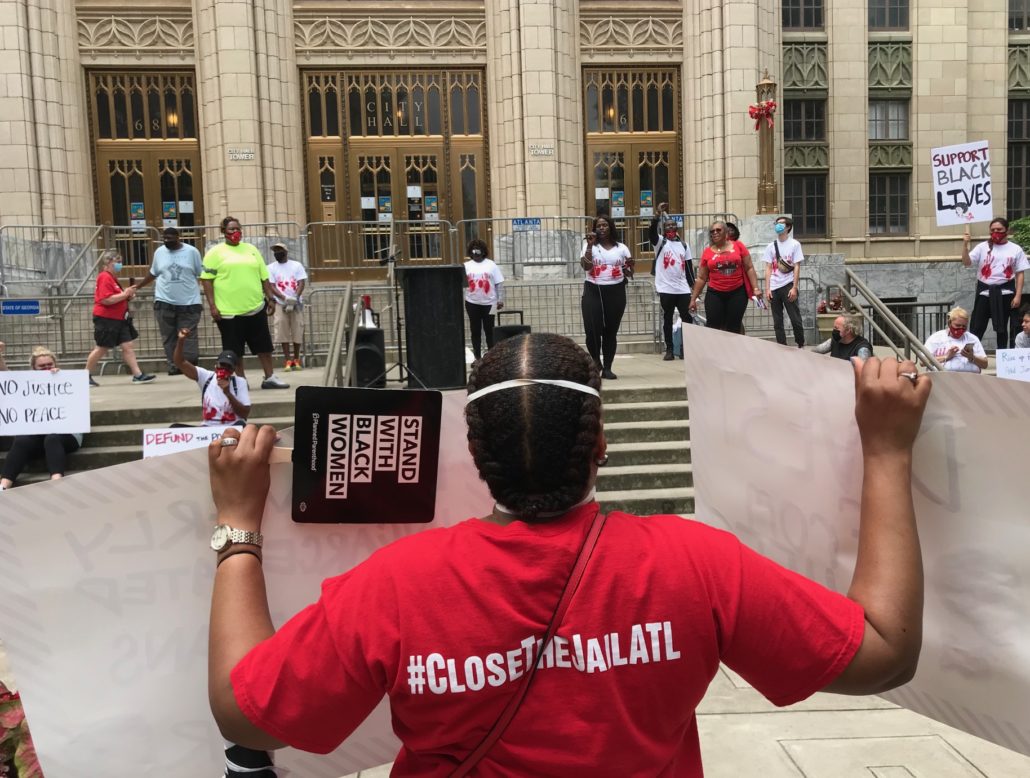 XB: I think first and foremost, again, we cannot separate out our police and our jail. Because when police arrest people, they take them to our jail. One of the key things that the city of Atlanta can do is complete the process of closing the jail and reallocate the now $18 million used to operate it into community services and supports. That’s something that could happen on July 1. So that’s a very easy one.

If there are other jurisdictions operating with a far lower officer-to-resident ratio, what is it that we could look at?

I think we can look at any place where we have militarized equipment, tanks, machine guns, weaponry, and ask can those be taken and stripped from the departmental budget? Because are things that have been known to to actually create or incite violence and not not bring safety to communities.

… I think things like the police departments inside of our school systems, is that a place where there could be cuts made?

A huge number of the arrests made and the work of our police department is actually addressing social needs that should be addressed elsewhere. All of those things could result in cuts. In the immediate term, the jail budget could be cut down to zero, and the police department could be cut significantly. In the longer term, we could look at a more significant dismantling and recreating of a public safety system from the ground up. 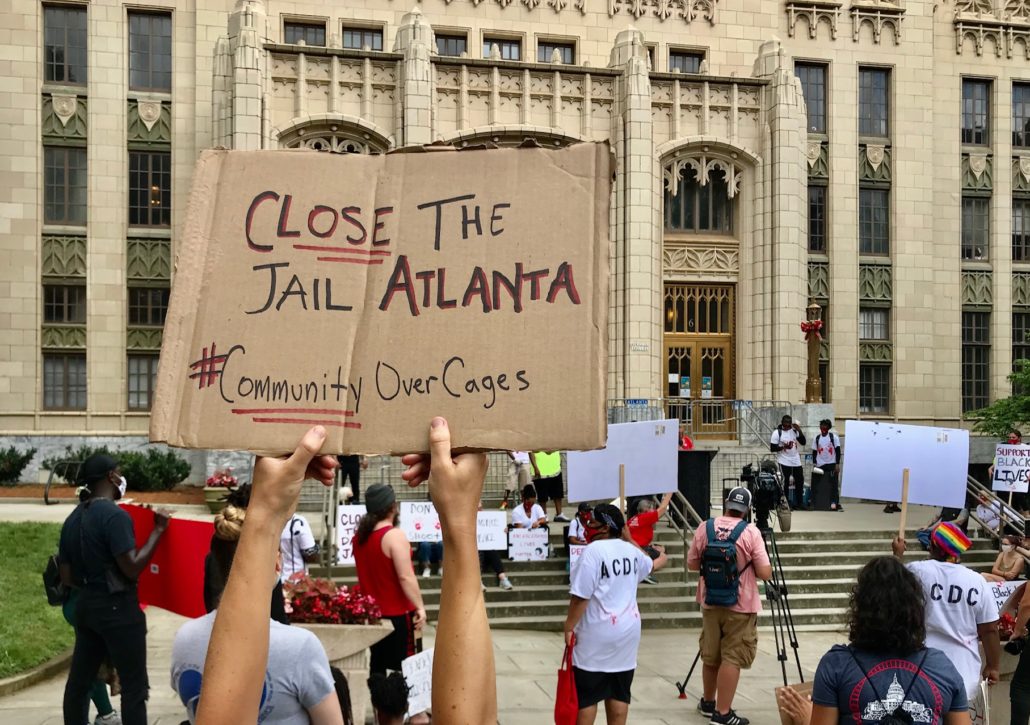 SR: Is there anything else I should ask you? Anything else you’d tell our readers? What have I missed?

They think to themselves, you know, bad people do bad things, they get arrested, they go to prison.

And I think it’s really important for us to say that most of us who have had loved ones who are incarcerated, know that prison and the criminal justice system actually doesn’t do anything for the person who committed the offense.

And for many of us who have been victims or survivors, our current system often does little for the survivor as well. So I have heard many survivors or victims of crime say, ‘It doesn’t help me to have somebody be locked up for 10 years for what they did to me only to return here to the same community, angrier and with fewer skills and less opportunity. What I wanted was to sit with them and have them hear from me, how it impacted me. Maybe I wanted an apology or I needed support to heal. What I wanted was a change in my circumstances that would have kept me safe.’

Transformative justice and restorative justice are actual approaches to address harm that is committed by people that doesn’t then isolate people and remove people from society and put them in a place that destroys mental health and then sends them back into the very community from which they came.

I think it’s one of the key things for people to be able to see the whole system. There’s obviously not safety when there’s an act of police violence, but there is also eroded safety when you have neighborhoods where people are going in and out of jail in and out of prison.

June 17: protestors at the Atlanta jail call to defund and dismantle the police. Credit: Kelly Jordan

*This interview was conducted on June 11, before Atlanta police shot Rayshard Brooks.