The DeKalb County Commission has voted to swap green space with a southwest DeKalb movie studio that would result in a bigger public green space and more movie-filming space.

But the swap vote divided the county commission.

Some see a Hollywood happy ending. And some see Hollywood-style make-believe.

The county is looking to trade away about 40 acres of mainly wooded park land in southwest DeKalb along the South River Trail. The land would go to Blackhall Studios, where it would like to expand from its nearby locations with new sound stages.

In return, Blackhall would give the county about 53 acres that are also right in the area. The county’s talking about using that land to give folks a new park with a playground, a trail, picnic shelters and more. 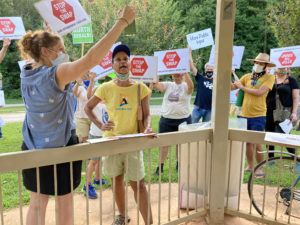 Jacqueline Echols, board president of the South River Watershed Alliance, speaking to a public meeting in September and calling out DeKalb County. “Nothing is that perfect … there is no balance here, there is no serious public comment,” she said. (Credit: Maggie Lee)

His southeast colleague, District 5 Commissioner Merida Davis Johnson said she looks forward to the swap and so do to her residents.

“I have a lot of constituents who are excited about Blackhall,” she said.

The idea is that people would get jobs on Blackhall productions and that there could be an economic “halo effect:” that local businesses would spring up nearby to cater to the folks on the sound stages.

But District 6 Commissioner Kathie Gannon, whose district also covers southwest DeKalb, says there’s no money to fix up a fancy park like residents are being promised.

“We’ve been hearing about this new park for 20 months, and then we find out last week, there’s no money for a new park,” Gannon said.

As part of the land swap, Blackhall is promising $1.5 million in-kind contribution of park amenities — like lights or an emergency call box. But that’s not near enough for the kind of park that DeKalb county’s administration is talking about in public meetings.

Gannon said that parks in the area like Glen Emerald are already suffering from a lack of maintenance.

A 2001 park bond “had $2 million in there to fix the dam at Glen Emerald,” Gannon said. “That didn’t get done. I don’t know who got their dams fixed but there wasn’t the dam down here at Glen Emerald.”

County COO Zach Williams said the administration has identified $1.7 million for getting started on a park on the land it would get in the swap.

But $1.7 million buys very, very little toward planning and building what he said the administration is imagining as a “destination” park.

It would involve, to start with, planning with the neighborhood and a five-year capital plan.

Gannon is not impressed by the talk of jobs for locals or internships for students, because she hasn’t seen anything enforceable in writing about it. Gannon said she doesn’t know what Blackhall has brought to the community except truck traffic and she was the sole vote against the swap.

He said of course the residents would appreciate park amenities and everyone should be engaged with meeting the green space needs of residents. But he said he has questions over whether this swap is the best way to do that.

“The planning that is going into this is not, what I would say, particularly rational,” Rader said. “It’s more political.”

All five other commissioners voted for the swap.

But the land DeKalb wants to trade away was a gift and its greenery comes with legal protections that the county can’t untie on its own.

The nonprofit Trust for Public Land acquired the land with the support of the Blank Foundation some 20 years ago, and put a covenant on the gift: it has to remain green space.

The covenant could be relaxed, but TPL hasn’t come out pro or con on the proposed swap: they’ve laid out some conditions it would take to get their support.

“We believe that that can happen,” Duenbury said after the Tuesday vote. “We do not believe that it has happened at this point in time.”

Back in 2018, when talk of the swap started bubbling up, TPL sent a letter to the county outlining point-by-point what they want to see in any swap.

One is that any amenities that would be lost would need to be replaced. Another is that the county should address any degradation of ecology that might occur.  And TPL will want to see funding in place to implement those plans.

Meanwhile, advocates fighting the swap say it’s a crummy ecological deal. Yes DeKalb gets more acreage, but some of it is already scalped of trees.

“The land swap is not only a bad legal precedent that will put parks across Metro Atlanta at risk, but it’s also a terrible deal for the environment,” said area resident Shannon Lee, who is also a member of the Stop the Swap campaign and senior urban conservation manager for The Conservation Fund, a nonprofit.

She and others worry that if the swap happens, developers will start to see conservation covenants as something that can be overcome.

Meanwhile, a term sheet published by the county puts the estimated timeline for completion of the exchange agreement at 30 days.

Commission meeting video (starts about one hour in)