Standing up for DeKalb’s homeless animals, they wear and see red

Fritz the rescue dog got shooed from last week’s DeKalb County Board of Commissioners meeting, marking yet another bad day for homeless animals in DeKalb and the humans who are rabid for an $8 million new county shelter. 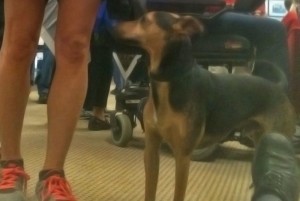 Fritz the rescue dog at the DeKalb Board of Commissioners meeting.

Fritz was rescued by a group that helps find homes for animals from the existing shelter near I-285 and Memorial Drive.  A citizens task force in early 2012 called the facility a filthy, smelly, bug- and rat-infested, understaffed “chamber of horrors.” Out of every ten animals that go there, seven die. It has the highest “kill rate” of any animal shelter in metro Atlanta, the task force reported.

“Animals are suffering and dying in a horrible, horrible condition in our shelter,” said activist Heidi Pollyea to the board. “If you have a minute to go down there I think you’d say, ‘Let’s get busy. Let’s get this approved.” We have the opportunity today to make a difference. Please do not delay. This cannot wait.” 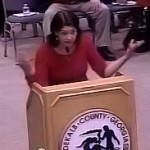 Heidi Pollyea, wearing red as she speaks to the DeKalb County Board of Commissioners. (Credit DeKalb County/DCTV)

As Pollyea spoke, the 75 other activists stood behind her. They wore shirts with pictures of  homeless dogs and cats pinned on them. Many have regularly attended meetings of the DeKalb County Board of Commissioners since the task force published its report in early 2012.

In its three previous meetings since March 12, the board had put off voting to put up $2.75 million in bond funding to design and begin construction of the new shelter next to DeKalb-Peachtree Airport.

Meanwhile at the current shelter, an average of 16 animals a day perish.

“They don’t give a crap about animals,” said Roxane Caspary, who provides graphics, photography and marketing for an animal rescue service.

Outside the commission meeting room, as animal activists questioned county CEO Burrell Ellis about the progress of talks with a private vendor contracted to take over management of the shelter, Caspary challenged him.

“Do you have any pets?” she asked.

“No,” replied Ellis, pausing. “I have fish.” Species aside, he said he understood her concern., adding, “I cared about children before I became a parent.” 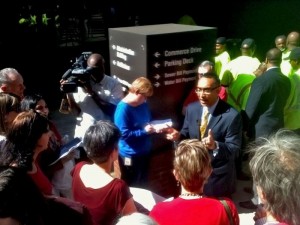 After the recent Board of Commissioners meeting, DeKalb CEO Burrell Ellis, (in suit, right) speaks with supporters of a proposed new animal shelter in DeKalb County.

The heavily populated area around the airport site will likely draw a bigger pool of volunteers and people to adopt animals. The five-acre site, originally set aside for a police precinct, is on airport property, thus cutting the cost of the project and making it possible to begin construction before the end of the year, supporters say.

The drawn-out process reminded Sue Kautz of Druid Hills that she prefers dog politics over human politics. Kautz said she spends about two to three days a week visiting the animals at the shelter, cleaning out their cages and taking them out for walks.

“You can count on dogs. They’re kind of straightforward,” she said. “It’s ‘you took my bone, give it back. You peed on that bush, well I’m going to pee on it too.’

“If they could only see it,” said Kautz, referring to the shelter, a refrain repeated by her comrades. 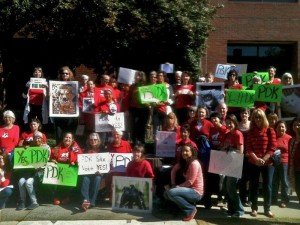 The shelter supporters show up at every Board of Commissioners meeting, wearing red and standing whenever one of their group speaks to the board members.

Todd Rehm sees both worlds. Rehm is a political strategist and a dog owner. When he gets up at 4 a.m. most mornings to publish news on GaPundit.com, Rehm also posts pictures and detailed descriptions on the online newsletter and Facebook of dogs set to be euthanized at area shelters such as DeKalb’s. To both audiences, he urges readers to rescue the animals before they get killed. Shelters, to Rehm, are “dog and cat killing machines on an industrial scale.”

Elected officials need a transformation of perspective, to get their noses out of paper and policy, and touch the furry coat of animals that only have a few hours to live.

“Commissioners want to treat them [shelters] as a line-item matter on a budget,” Rehm said. “If I were a county commissioner, I would be more comfortable not knowing that this is about Fluffy and that all of the staff and volunteers love him, and he’s going to die tomorrow.”

Like Fritz, who made it through building security and into the board meeting, DeKalb animal advocates will need to remain persistent. The board voted 5-2 to put off a vote on the proposal. The commissioners said they hadn’t been given enough time to read an analysis prepared by staff members in Ellis’ office and an advisory board that favored the airport location over dozens of other proposed sites in the county. 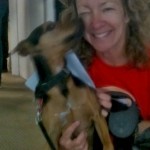 Fritz with owner Jill Jordan, who adopted him from a group that rescues animals from the current shelter in DeKalb County, which supporters like her would like to see closed because of its deplorable conditions.

The commissioners varied in their other reasons for the postponement . Elaine Boyer said the matter needed to go before a committee meeting. Sharon Barnes Sutton said she wanted to see real estate comps from the top sites reviewed by the advisory panel.  Larry Johnson wanted “to review it even further in knowing that they would give us some good recommendations.” Commissioner Lee May insisted the board wasn’t trying to block the plan; he has voiced skepticism because the site is so far away from his constituents in southeast DeKalb. Jeff Rader and Kathie Gannon, who represent the areas closest to the new shelter, opposed delaying the vote.

The board may vote at their next meeting May 14. In the meantime, if you want to rescue the next Fritz, the DeKalb County Animal Shelter lists its adoptable pets at http://www.petfinder.com/shelters/GA423.html. Samantha the labrador, Panda the domestic shorthair and Batman the pointer are looking for homes.

Bald eagles continue recovery in Georgia after becoming all but extinct
David Pendered April 24, 2015 10:15 am