Both agree that this is a critical issue that needs to be addressed today.

Yesterday, the Atlanta Press Club hosted their Newsmaker Leadership Series. The conversation centered on how the global business sector can improve problems with pollution.

“We can’t walk out of this timeframe without a renewed commitment to replenishing the Earth, healing the planet, and creating an opportunity for all of our children going forward,” said Ed Bastian, CEO of Delta.

“I want to make sure we all recognize that this is a real deal and yet I’m very optimistic,” said Ángel Cabrera, president of Georgia Tech. 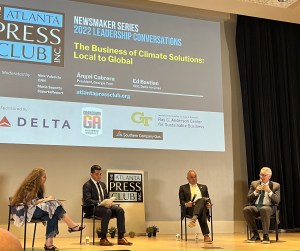 Bastian says Delta has a long partnership with Georgia Tech on creating solutions to reduce the company’s carbon footprint.

“We maintain that commitment so we’ve made those investments and we estimated costing $100 million a year,” Bastian said.

Flying less in 2020 allowed the Atlanta-based airline to invest in offsets to reduce carbon emissions. Today, he estimates the cost to be $75 million.

“Many companies are now racing to net zero,” Bastian said. “The marketplace is tight and the cost of these efforts have tripled and quadrupled to try to find a certified offset that is going to replenish the world.”

Cabrera says the federal government gives $1 to 3 billion to Georgia Tech for scientists’ research. Delta has also collaborated with the Departments of Energy and Transportation to partner with their endeavors.

“This administration is very focused on moving towards a green future and it’s expensive,” Bastian said. “Mandating people to do it isn’t going to be the answer.”

He recognized his Chief Sustainability Officer, Pamela Fletcher, as the first person hired in this position by any airline. Fletcher worked in the same capacity at General Motors (GM) and wanted her to create the same results. 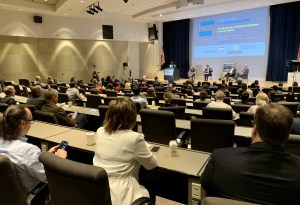 “When I spoke to her, I said, ‘I need you to do for us in the sky, the way you did on the ground for GM,” Bastian said.

His hiring of Fletcher is an example that change starts with leadership.

“It all starts when a business leader says, ‘this is important,” said Cabrera, “and I think that idea of how we make sure that the new generation of business leaders have and share that attitude. Many of the solutions coming forward are not just new technologies — it’s the business model around them.”

Russia invading Ukraine also came up in the conversation. The constant bombing and threats of using nuclear weapons will have a lasting impact on the planet for centuries to come.

“I don’t know what’s in Putin’s mind,” Bastian said, “but I think all these things have some level of interrelationship.”

When asked by Valencia if Delta continues to purchase oil from Russia, Bastian said they stopped before sanctions were put in place. When he was told Russia was one of the top sources for oil at their inhouse oil refinery, Monroe, he immediately ended their open contracts.

Investing in new innovations is a lot of what Georgia Tech and Delta are working on today. Delta’s latest plane, the model 321 Neil, is a narrow-bodied 190-seat plane that will replace their current 757s and is 35 to 40 percent more fuel-efficient.

“It’s not built on sustainable aviation fuels,” Bastian said, “but it’s making a big difference in the footprint.”

Last year, Georgia Tech’s Kendeda Building for Innovative and Sustainable Design — aka the “living” building — opened its doors, being “net positive” in its use of energy and water. 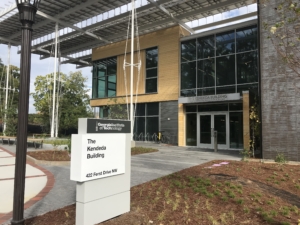 The front of the Kendeda Living Building at 422 Ferst Dr. at Georgia Tech. (Photo by Maria Saporta.)

“We now realize that one of the most important things we can do at Georgia Tech is to inspire that next generation of all of those students in our classrooms and that means thinking differently about our buildings,” Cabrera said.

He is helping the conversation by partnering with Drawdown Georgia. Like Georgia Tech’s Ray C. Anderson Center for Sustainable Business, their initiatives will help the Peach State cut its carbon impact usage to one-third by 2030.

“With this effort to bring this global problem close to home is to make sure that everybody understands that everybody has a role to play,” he said. “This is not something for us to react for somebody else to fix.”