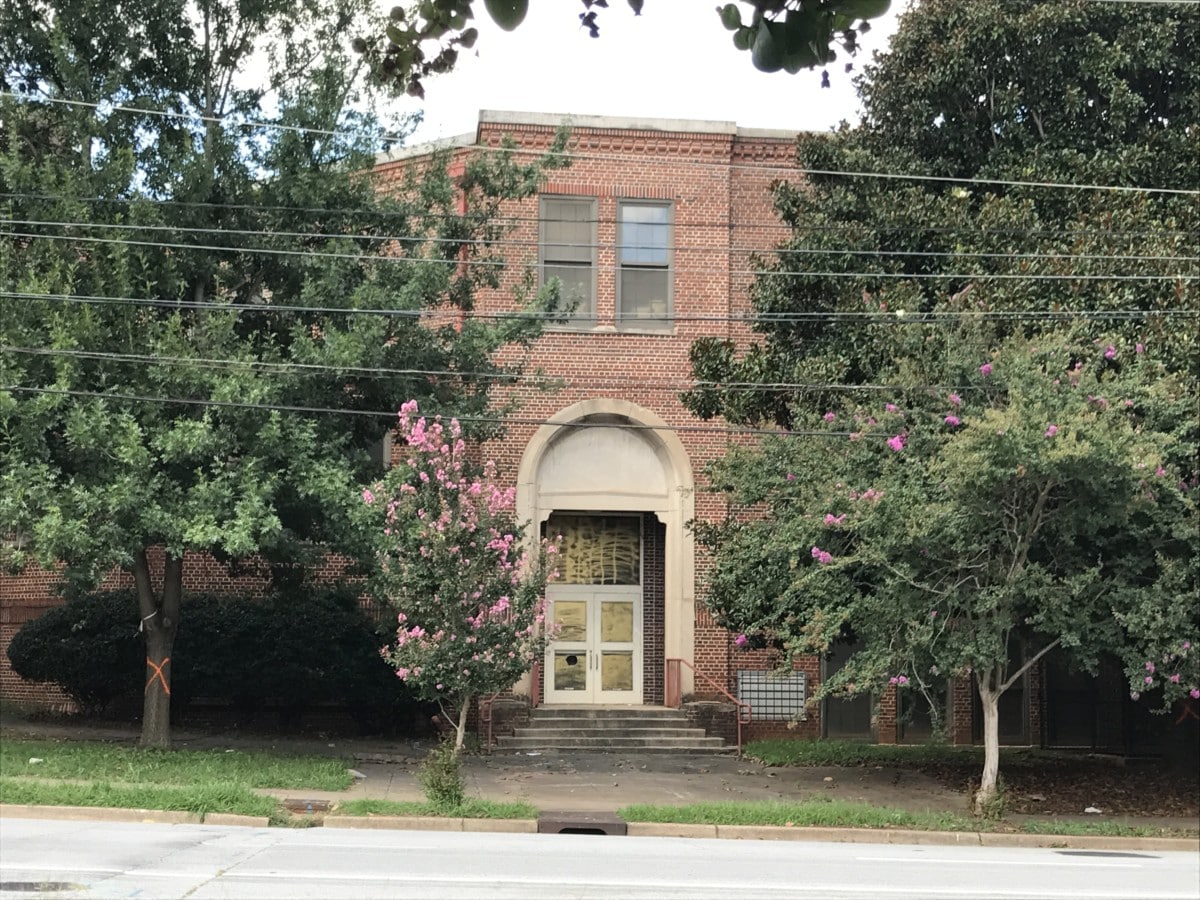 The Metro Atlanta YMCA is about to destroy a significant part of civil rights history in the African American Community, historic Jordan Hall. They are not doing it alone.

Their primary partners are the Woodruff Foundations and Invest Atlanta, who have given more than half of the $20 million necessary.

The YMCA has taken a series of actions that are part of a conscious decision to avoid saving this building:

This is a matter of priorities on the part of the YMCA, the city of Atlanta and many others, and African American landmarks, even those related to civil rights, are simply not a high priority. 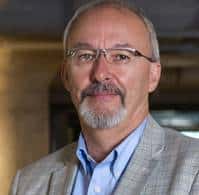 Jordan Hall, formerly the E.A. Ware Elementary School, is in the Atlanta University Center National Historic District, but the city of Atlanta never included Jordan Hall or the Historic District on its list of landmarks worthy of protection! Historic Paschal’s, Gaines Hall, the Butler Street Y and the Historic West Hunter Street Baptist Church (and many others) are not on this list either and can be demolished without comment. The city’s dereliction has been far reaching and the Y uses this argument to claim Jordan Hall is not worth saving.

Recently, the Atlanta Urban Design Commission protected Pullman Yard and Briarcliff Plaza with landmark designations! How can a city so important to civil rights and led by African-American mayors since 1973 think these buildings are more important than Jordan Hall, Gaines Hall or Paschal’s? Action and inaction is the clearest indication of priorities, and African-American/Civil Rights history is obviously a very low priority with the city.

Jordan Hall represents the start of the modern day civil rights movement. It is the first time in the history of America that the black community united in a successful effort to demand the white power structure invest in black schools. It was built in 1922 after the black community, led by A.D. Williams, Martin Luther King, Jr’s grandfather, united African-American voters to defeat a citywide bond issue three times in ten months. It was only after the city allocated $3.5 million for schools in the African American community ($53 million in today’s dollars) that it passed overwhelmingly.

Because of this, E.A. Ware Elementary School was the first “bricks and mortar” elementary school for black children in Atlanta, and most likely in the entire South.  Other schools built included Washington High School, Brown and Howard middle schools. These schools raised the education level of African Americans in Atlanta, and allowed the AU Center colleges to grow into the institutions we know. 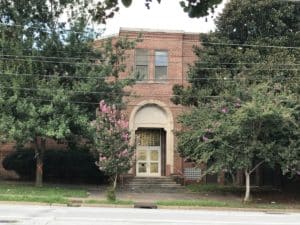 The YMCA has been aware of this history for some time, but it did not cause them to consider alternatives and explore a campaign to restore the building.  Some people say this is another indication of a general lack of interest in Civil Rights/African American historic sites in Atlanta.

Slavery, segregation, abuse, inequality and racism are all a part of America. We cannot ignore it or hide from facts, for that guarantees they continue. These buildings are relics of the past, but more importantly they are evidence of the brave and strong people who struggled to overcome the circumstances of their birth. Every day we fail to give their stories, their sacrifices, their achievements the respect or honor they deserve.  Our neglect disrespects their heritage and deprives us of being a better country.

The movement towards civil rights is far greater than Martin Luther King, Jr., and Atlanta has strong evidence of this dating back to before the Civil War. Savannah and Charleston have built their economies on cultural tourism, but their histories are slave based – all their historic buildings were built and/or maintained by enslaved Africans.  Atlanta has the unique opportunity to create an industry based on freedom and civil rights.  Vine City alone can begin with Alonzo Herndon and Atlanta University, and continue to the Voting Rights Act and beyond.  But every building we lose is a lost opportunity – one that can never be replaced.

The YMCA has suggested that “look the other way” to other buildings, but only they are moving towards demolition.  The YMCA aims to build leaders – this is an opportunity for the Y to be leaders. Thus far, they have refused requests, even refusing help raising the needed money.

We the people, the City of Atlanta, and historic preservation organizations in Atlanta, must unite if there is any chance of saving our history.

Civil rights benefits all Americans, regardless of our ethnic background. We all need to know these stories of personal struggle and success.  We must act today to save these buildings for tomorrow.

Plans call much of Jordan Hall to be demolished to make way for a new headquarters for the Atlanta YMCA. The entry building facing Martin Luther King Drive is to be retained and the design of much of the new facade is to complement Jordan Hall. Credit: insight.investatlanta.com 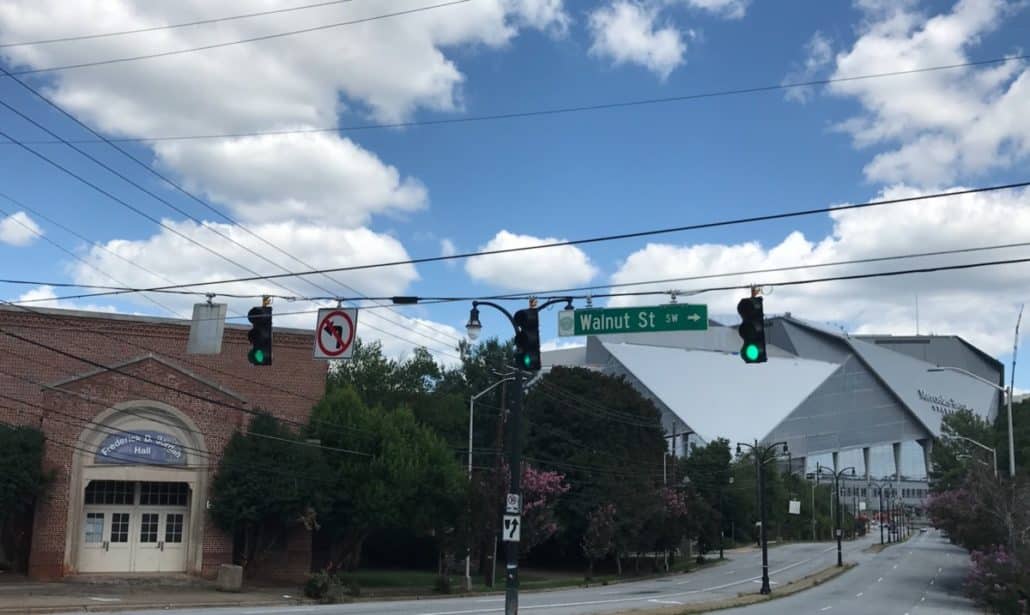 The Mercedes Benz Stadium is in walking distance from the site of Jordan Hall and the future home of the headquarters of the Atlanta YMCA. Credit: David Pendered 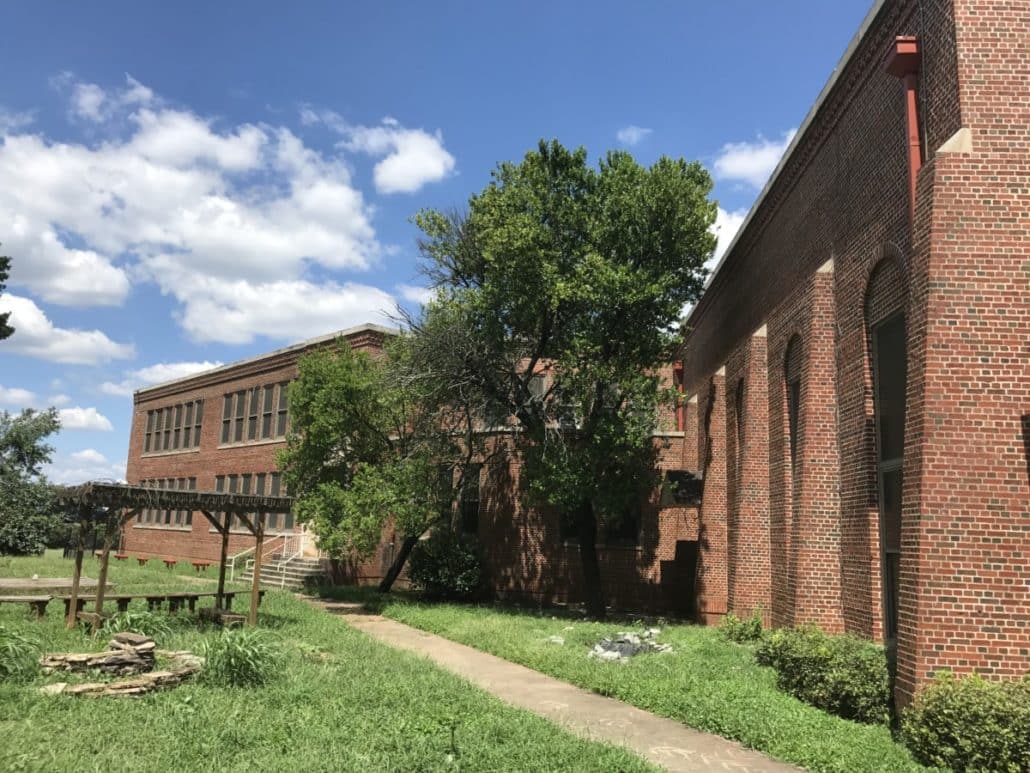 A small patch of ground on the west side of Jordan Hall is outfitted with an outdoor theater built for a classroom of children, seating and a hop scotch court. Credit: David Pendered 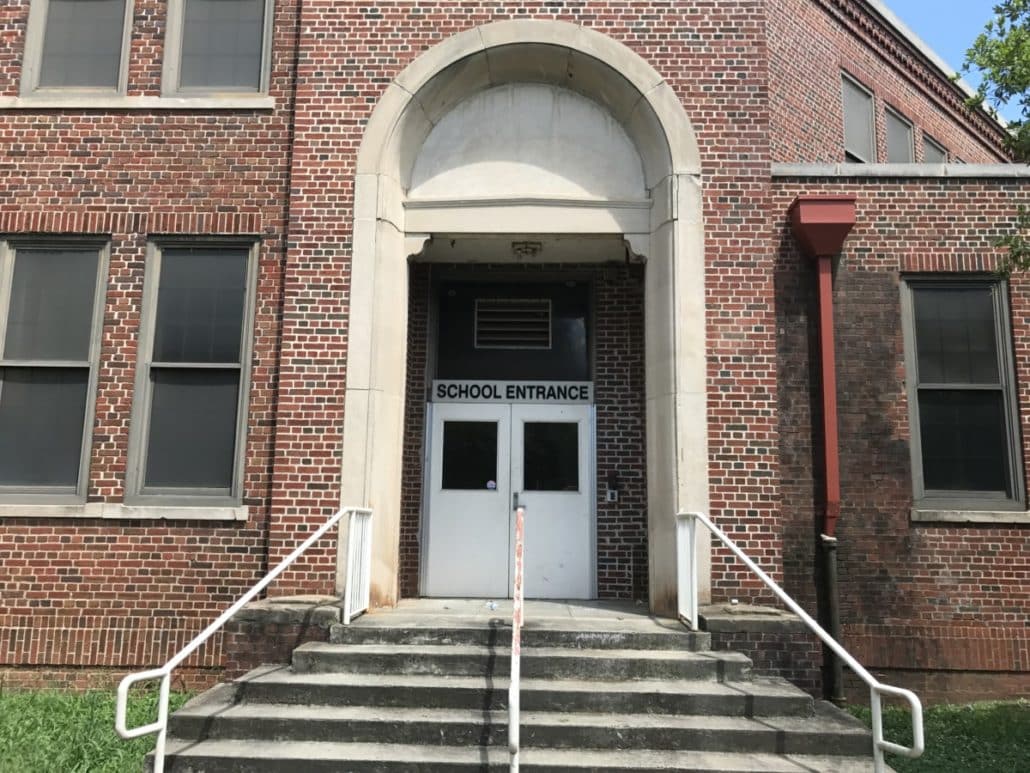 This doorway on the west side of Jordan Hall opens onto the small playground and courtyard. Credit: David Pendered 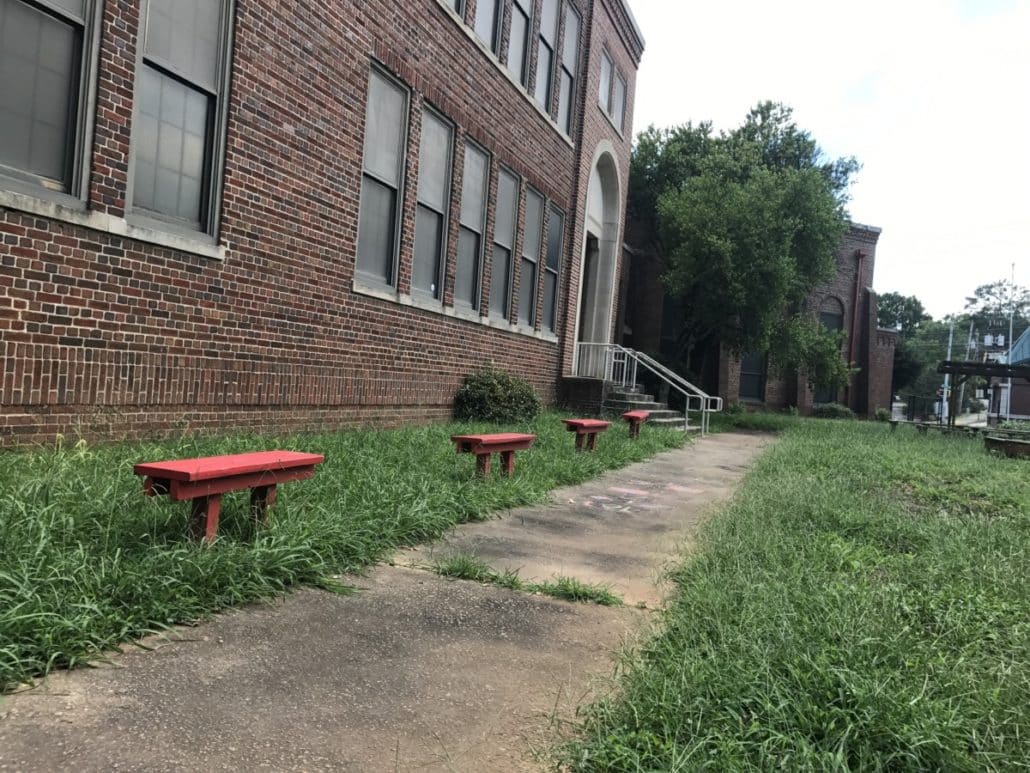 Benches line a walkway on the west side of Jordan Hall. A hop scotch court is marked on the walkway in front of the benches. Credit: David Pendered 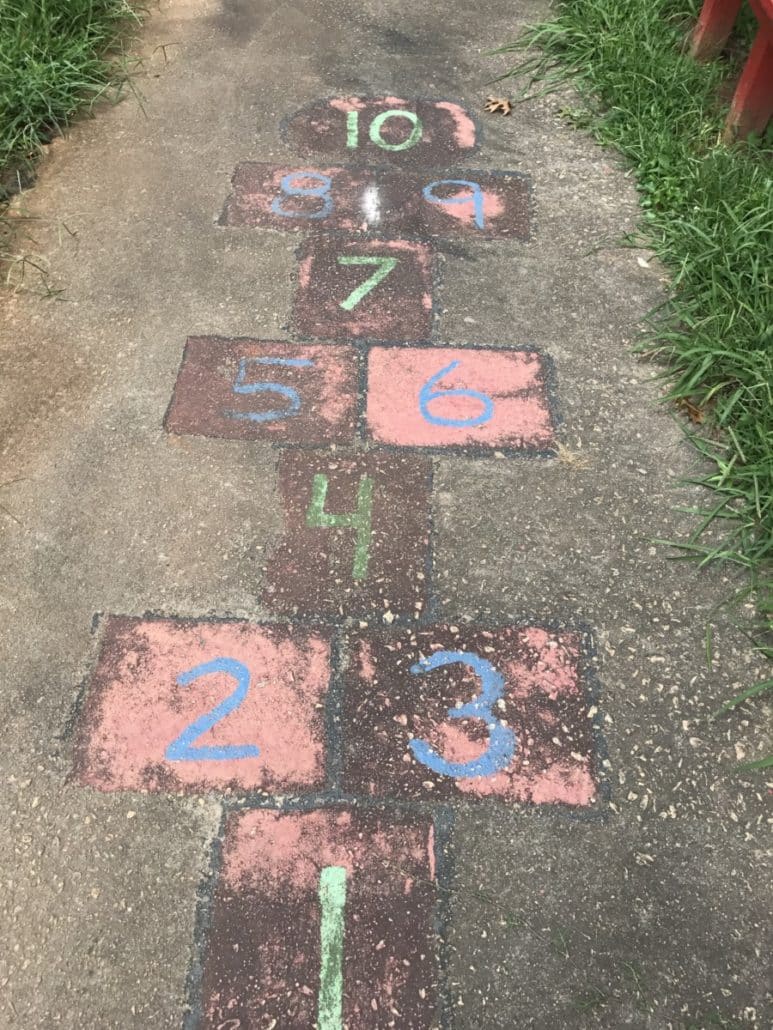 A hop scotch court is ready for children to play beside Jordan Hall. Credit: David Pendered