Let’s design a safer Atlanta for pedestrians and cyclists

Shifting Atlanta from a city centered around cars to one focused on people on foot or bicycles faced a reality-check on Friday.

Alexis Hyneman, a 14-year-old student at Grady High School, lost her young life when a car hit her while she was riding her bicycle Thursday at the super-confusing intersection of 10th Street, Monroe Drive and the Atlanta BeltLine. 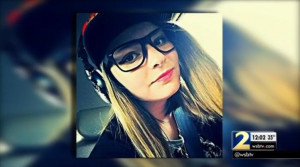 A photo of Alexis Hyneman that appeared on WSB-TV (Special: WSB-TV)

Hyneman’s death was tragic. The one positive outcome was to serve as a reminder for our top leaders that our city needs to do better.

“The safety of pedestrians and cyclists remains a priority for my administration, with $37 million dollars in the Renew Atlanta infrastructure program committed to making sidewalks and streets safe for people of all ages and abilities whether they are walking, biking or riding,” Atlanta Mayor Kasim Reed said in a statement released Monday afternoon. “We value our partnership with the cycling and pedestrian advocacy community who have been engaged with the City to adopt policies and practices that prioritize people over cars.” 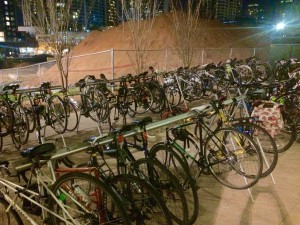 Dozens of bicycles are parked in front of the Atlanta Bicycle Coalition’s 25th anniversary for the Blink Awards on Feb. 12 at “the Garage” near Georgia Tech (Photo by Maria Saporta)

Both organizations have done an incredible job in trying to help Atlanta adapt to becoming a more cosmopolitan city with a thriving urban core.

When we think of the world’s greatest cities, we inevitably think of cities we enjoy while walking or riding on transit or cycling. We rarely think of cities filled with surface parking lots, highways and commercial strip arterials.

Today, Atlanta is moving in the right direction. But I can’t help but feel we need to move faster and more aggressively to make our city safer for pedestrians and cyclists. 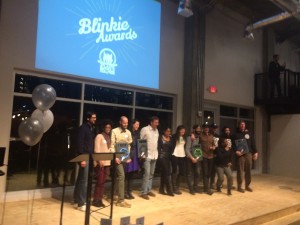 In response to Hyneman’s death, Reed immediately echoed recommendations of the Atlanta Bicycle Coalition – saying the Renew Atlanta program already has allocated $2.5 million for a complete street overhaul of Monroe Drive, and the city “will move quickly to get these improvements done.”

Some of us have been waiting a really long time.

When I lived in Boston from 1973 to 1977, my five-speed bicycle was my major mode of transportation. So when I moved back to Atlanta, I brought my bicycle quickly realizing local drivers had little respect for someone on two wheels.

At the time I was getting my Master’s in urban studies at Georgia State University, and I was able to get a graduate assistantship with Atlanta’s planning department. I asked if I could do bicycle planning for the city, and even though that was a foreign concept, my bosses said yes. 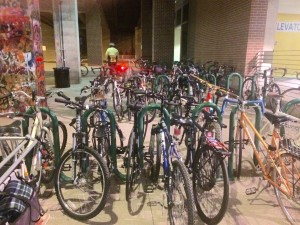 Among the biggest hazards for Atlanta cyclists in the 1970s were sewer grates running parallel to the road – perfect for bicycle tires falling in the slots and flipping cyclists into the road.

I found out one could swap out sewer grates to have the bars run perpendicular to the street – making them safe for bicyclists. So when I presented a proposal to an engineer at public works, he told me that swapping out the grates would cause horrendous flooding in Atlanta and made a comment about bicyclists being Communists.

When I was nearing graduation from GSU, I didn’t know whether I should become a journalist or city planner – specializing in alternative transportation planning. To answer that question, I spent four months traveling throughout Europe – interviewing transportation planners and journalists.

I saw wonderful, innovative plans – streets designed to slow traffic; crosswalks made of a different pavement that brought cars to stop; buffered bicycle lanes next to wide sidewalks; and all kinds of public transit. But city planners kept telling me how hard it was to get their plans implemented – and that was in Europe, a continent that respects planning.

Upon returning to Atlanta in 1980, I had decided I might be able to have a greater impact as an urban-oriented journalist than as a planner. My career choice, however, has never stopped me from dreaming, scheming and planning on how we can improve our city.

The stretch of Monroe Drive from 8th Street to Park Drive is one of the more complicated puzzles for an Atlanta transportation planner. To really fix it, we should have a design competition that would make the entire corridor safer for all – but especially pedestrians and cyclists who are at a natural disadvantage in a collision with a car.

Reed, in his statement released Monday, appears to understand what’s at stake.

“The safety of Atlanta’s pedestrians, bicyclists and traveling public remains this Administration’s top priority,” Reed said. “My senior leadership team, including the City’s Chief Bicycle Officer, will work closely with the Atlanta City Council to continue making Atlanta a city that supports all modes of transportation.”

By designing an Atlanta for people first, we will create a city with a greater quality of life. And we will end up loving our city even more than we do today. 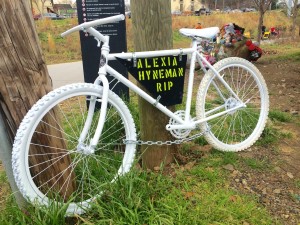