How bad does a movie have to be to obliterate the considerable talents of Julia Louis-Dreyfus?

As bad as “Downhill” (please feel free to make your own “downhill all the way” joke or a variation thereof). 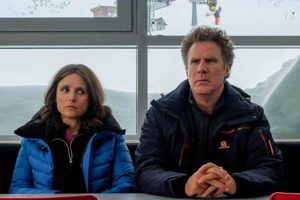 “Downhill” is of interest for two reasons. First, Louis-Dreyfus is paired with Will Ferrell, a gifted but more limited performer. Second, the movie is based on a 2014 Swedish movie, “Force Majeure” which raised some disturbing questions about gender roles within the context of marriage.

Bong Joon-Ho, who recently made history at the Oscars by winning Best Director, Best International Feature and Best Picture, might’ve had an idea how to do this for American audiences. But co-directors Jim Rash and Nat Faxon, who also did the screenplay (with Jesse Armstrong), did not.

“Downhill” is about a well-heeled American family on a skiing vacation in the Alps. We immediately notice strains between husband and wife, Billie (Louis-Dreyfus) and Pete (Ferrell) – strains their two boys notice. He’s glued to his cell phone. She’s determined this be a “fun” family time that brings everyone closer together.

The precipitating event happens within the first 10 minutes. They are enjoying lunch outside when a controlled avalanche is set off (something resorts apparently do on a regular basis). But as the wall of snow crashes toward them, it suddenly doesn’t seem so controlled.

Pete’s response is similarly uncontrolled. He leaps to his feet and runs, in essence abandoning his family to their fate. As it turns out, everyone is fine, the avalanche appearing more dangerous than it actually is.

But the damage is done. Pete has behaved badly, and Billie can’t let it go. Or rather, Pete has not lived up to the unspoken code of patriarchal responsibility and, well, she can’t let it go. The children simply look ashamed and miserable. 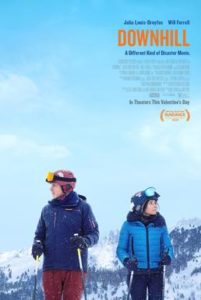 And that’s how we spend the rest of the movie. Pete invites a work pal and his much younger girlfriend for a visit (he lies about how they happened to “drop by” which only deepens the marital schism). The family returns to the slopes in glum isolation. Billie fumes, and Pete suffers.

It’s not especially funny, but it’s not bitingly satiric either. And the supporting characters are wincingly insufferable – poor Miranda Otto as a Teutonic, sex-obsessed resort hostess and Giulio Berruti as a hunky ski instructor who comes on to Billie. Their scenes are excruciatingly off-key, and they drive the picture further into the ground.

Louis-Dreyfus doesn’t emerge exactly unscathed, but she manages to pull off a few unforgettable moments – especially when she forces her boys to testify to their father’s behavior. It’s just that she’s such a treasure and, with “Veep” over, one longs to see her as often as possible. But not in something like this.

Ferrell has made me laugh myself silly in movies like “Talladega Nights” and “Blades of Glory.” But he’s badly miscast here. We are used to his blustering man-child, so when he bolts, we’re not exactly surprised. And his misguided attempts to redeem himself go nowhere.

The point isn’t how good “Force Majeure” was, but how off-target “Downhill” is. How could anyone admire the first picture and deliver the second one? Maybe the filmmakers have spent too much time at Aspen and not enough at the movies.