"People think that revitalization or redevelopment is synonymous with gentrification and I fundamentally believe that they're not," says East Point Mayor Deana Holiday Ingraham. Credit: Courtesy City of East Point

“People think that revitalization or redevelopment is synonymous with gentrification and I fundamentally believe that they’re not,” says East Point Mayor Deana Holiday Ingraham. Credit: Courtesy City of East Point

East Point owns almost nine acres downtown, it has a new city hall and transit soccer field; miles of PATH trails are underway, developers are eyeing moribund downtown lots and it’s home to about 35,000 people mostly inside the Perimeter.

And Mayor Deana Holiday Ingraham says the city is at a point where it needs to be intentional about development — to make sure development doesn’t mean displacement and that the city retains its diversity.

Back in January, city council voted unanimously to get started on a city equity plan.

Mayor Ingraham spoke to SR about East Point’s equity plan earlier this month. (This interview has been edited for length and clarity; the full version is here.)

Mayor Deana Holiday Ingraham: An “equitable development and inclusion plan” means that development happens with people in our community and not to them.

It means that we’re growing in a way that our legacy residents and our businesses can stay with us, and that we minimize the negative impacts of gentrification, if not totally eliminate them, as we move forward with redeveloping our city. 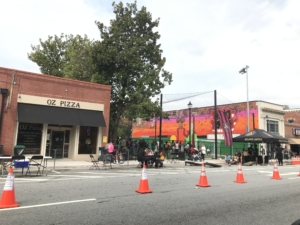 A bright mural adorns a brick building next to the new Soccer in the Streets field that opened in East Point. The field was built in October 2019 on land provided by East Point and the two adjacent businesses – Oz Pizza, owned by Chris Wiley, and the law office of Rob Baskin. Credit: David Pendered

Oftentimes, people think that revitalization or redevelopment is synonymous with gentrification and I fundamentally believe that they’re not.

I believe you can totally redevelop and revitalize a city without gentrifying, through equity, through ensuring that we’re having development that meets the needs of the residents while also meeting development needs.

So that is people-focused; and that really speaks to this holistic part of development that looks at “how do we develop?” How do we attract developers who want to build buildings as well as build community? Because I think that that’s required.

SR: What’s going on in East Point right now that makes this a timely thing to study? Is there something sort of coming to a head right now, is it a key moment right now?

DHI: It’s absolutely a key moment right now and there are a couple of things coming to a head.

… We are two MARTA stops from the airport and there is a lot of development and things happening in Atlanta city proper and in the metro Atlanta area. We are a jewel city with a lot of assets. We have the third soccer field on the world’s first transit soccer league. In our downtown, there are a lot of things happening. And so, the market is really driving people to our city.

And we’ve also, as a city, purchased just under nine acres in the heart of our downtown to actually do a mixed-use development.

And last year, we cut the ribbon to our new city hall, an over 30,000-square foot building that is catalytic to the development that will be happening downtown.

So for us, that … makes us understand that this is a critically important time and that we can’t just ‘desire’ to have a place where all are welcome and included and where we grow this sense of community, if we don’t plan for it …

SR: What are the outcomes you expect from the study, what are the deliverables that will come out of this study?

DHI: We’re looking at a couple of key high-level areas around economic inclusion. [Such as] looking at our zoning and ordinance rewrite that we’re getting ready to undergo around unified zoning.

There’s a real key focus on economic inclusion, community benefit agreements. … Definitely we are open for business and welcome businesses, but we also want to make clear our expectations of businesses that come into our community. And if we are going to partner with and incentivize a business for coming, then there has to be ideally equal community benefit, but definitely close to those incentives. (Which generally look like tax abatements, tax breaks and a number of other incentives as well.)

… There’s also equitable industrial land use. We, historically, our forefathers, the way we were founded, we were kind of an industrial city. While there are definitely still some industrial hubs within our city, I think we are growing in a different way. And that there are some higher and better uses for different land within our city to ensure that we are not negatively impacting the quality of life of our residents through more industrialization. And that we have industrial uses that actually provide a benefit to the community. Some have talked about manufacturing, things that provide livable wage jobs and minimize the carbon footprint from all these trucks and things of that nature. So, we’re really taking a look at that …

And then also, housing affordability … So how do we ensure as we’re growing, that we continue to have a diverse housing stock, that makes housing affordable to everyone in our city, regardless of their income level?

And all with this goal of ensuring that people can grow, the people who’ve been here and invested in in our city for quite some time, have the opportunity to grow with us. 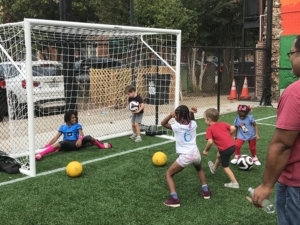 Kalen Watkins played a superb round as shot blocker as strikers lined up against him during the inaugural play in October 2019 at the new field Soccer in the Streets and its partners established in East Point. Credit: David Pendered

SR: Say it’s 10 years in the future and this plan has come out and the city’s acted on the things in the plan. How will the residents experience the benefit? How will things be different?

DHI: From a resident’s point of view, I would say, a couple things: there will be pride in the fact that we would have at that point a model equitable development in our downtown area. The land that we’ve purchased and the development that we put there would be something that would be equitable, and a place for them to enjoy … the commercial portion of it, the the green space that we anticipate having there.

There will continue to be this multicultural city where we have people of all different races, of different socioeconomic status, we have a significant LGBTQIA population in our city. I believe our intentionality around equity and inclusion will enable us to continue to have that …

DHI: I would just say that equity and inclusion is more than a cliché. It’s an intentional act.

I won’t profess and say right now we’ve figured it all out. We haven’t. We are literally building the plane while we’re flying. But what we do have is a real belief in the fact that things can be different. And that we can develop differently. And that there’s a commitment to at least trying that.

If you do the same thing and expect different results, that’s insanity. But if you are willing to take the chance and to try something different and to partner with experts to help you along the way, to build the capacity of your staff, as well as make clear your expectations to the community that you serve, [and] also the development community and the business community, that this is who we are, this is what we believe and this is where we’re going, I believe that we’ll get there.