Photo by visuals on Unsplash.com

East Point’s opportunity to join the metro development boom was a major topic at a Sept. 21 mayoral candidate forum, where the incumbent touted her “rebranding” of the city against challengers who say they can run things more efficiently.

The reputation of government itself is also an issue for East Point, whose City Council meetings have often made the news for arguments and legal disputes. The candidates had different takes on the tone, and one was chided by the moderator for calling the others “Tweedledee and Tweedledum.”

Hosted by the nonprofit Georgia STAND-UP, the streaming-only forum for the Nov. 2 mayoral election included incumbent Deana Holiday Ingraham and challengers Eddie Lee Brewster and Nanette Saucier. Moderating was Rashad Richey, a political commentator and journalist for several radio and TV stations and an executive at Rolling Out magazine. Technical problems delayed the live-stream, but the full video is now available on YouTube.

Brewster is a political consultant and former City Council member running as “the outsider with a view of listening to the people.” He’s calling for a “forensic audit” of City spending and a reworking of electric utility fees. 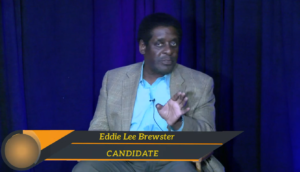 Holiday Ingraham is an attorney and special projects manager at the Georgia Statewide Afterschool Network who also previously served on the City Council. Running for a second term as mayor, is touting her achievements of overseeing an increase in residents and businesses and construction of City Hall and a fire station.

Saucier is an insurance agent who has served on the City Council since 2013 and holds the Ward C at-large seat. She’s focused on improving municipal services like permitting and licensing, and getting more input from residents and businesses.

Tucked against Southwest Atlanta, East Point is among the cities in southern Fulton County looking for ways to grow beyond industrial roots while dealing with issues like housing affordability. All of the candidates agreed that a big moment is coming for the next mayor in 2022, when a new zoning code and comprehensive development plan are due.

Holiday Ingraham said East Point is poised for redevelopment success now that “we basically moved away from the mistakes of the past, the bad image of the city.” She pointed to Microsoft’s forthcoming $400-million-plus data center that will straddle the border of East Point and Palmetto. For future development, she said, the city has to undo past zoning wrongs of placing industrial uses near homes and to focus on mixed-use, transit-oriented and adaptive-reuse projects.

“If we say yes to warehouses today and industrial today,” she said, “we are saying no to shopping, offices, retail, entertainment and restaurants tomorrow.”

Brewster and Saucier indicated they think more than a big vision is needed, but also a well-functioning government to execute it. Both said City processes need improvement to become more business-friendly. 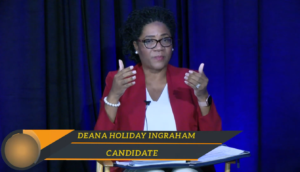 Another economic development trend that East Point is leaning into is City-sponsored concerts. Its “Wednesday Wind Down” events, which began in 2018, have drawn big crowds. But, as a question posed by Richey noted, they’ve also drawn concerns about traffic, trash and “perceived lack of community benefits.”

Saucier, however, said the events have grown well beyond the size and $30,000 budget originally approved by the council in 2018. She said spending and approvals are now unclear but it appears that hundreds of thousands of dollars are going to the events rather than other needs. She also criticized the staging of one Wednesday Wind Down as a COVID-19 risk to first responders and staff.

“I was extremely concerned that a concert was held at the height of the pandemic,” said Saucier. “… We’re not concert promoters.”

In response to a question about the City Council’s reputation for “dysfunction,” the candidates had different takes.

“I am the leader who has been proved to be a consensus-builder and to take bold, people-focused actions,” said Holiday Ingraham, claiming success in brokering compromises among councilmembers. However, she also took a shot at Saucier for voting against a pandemic mask-wearing mandate at a time when then-President Trump and Gov. Brian Kemp were “playing politics with people’s lives.”

Saucier responded that she was merely concerned about the legal implications of violating Kemp’s emergency order, which disallowed municipal mask mandates, and instead worked on a program to hand out free masks. 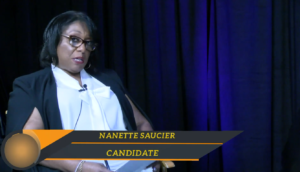 As for City Council decorum, Saucier spoke broadly about the need for civility and her personal discipline. “I cannot tell you how many times I’ve held my breath and smiled when I was really angry. But it’s about the City of East Point. Everything we do is about that city,” she said. Unmentioned was Saucier’s role in one of the recent council brouhahas, where she filed a lawsuit questioning the validity of fellow Councilmember Joshua B. Butler IV’s election due to his publicly known prior felony conviction.

Brewster recalled times when council meetings got “rowdy” and alluded to a 2013 incident where two heckling audience members were arrested at the order of irritated councilmembers. “I’m from the school of positive confrontation,” said Brewster, explaining that he respects the right of the public to question elected officials. He said both the officials and members of the public should be heard at meetings without interruption.

Brewster was chided by Richey, the moderator, for a lack of decorum of his own for calling the other candidates “Tweedledee and Tweedledum” during closing remarks. While it’s fairly common political slang for a choice between politically similar candidates, Richey took offense. “‘Tweedledee and Tweedledum’ was disrespectful, brother. I expect more out of you, brother,” he said.

The substance of Brewster’s comment was that both candidates are already in office and should already have made the changes for which they advocate. Both responded by going after his campaign issue of lowering electric rates. Holiday Ingraham called it “sensationalism” and said rates had not increased since 2013. Saucier said the contract in question is complex because it involves other utilities and said it was in effect when Brewster was on the council, turning the tables to note he didn’t change it, either.