Ebenezer and partners bail out 10, for start of campaign 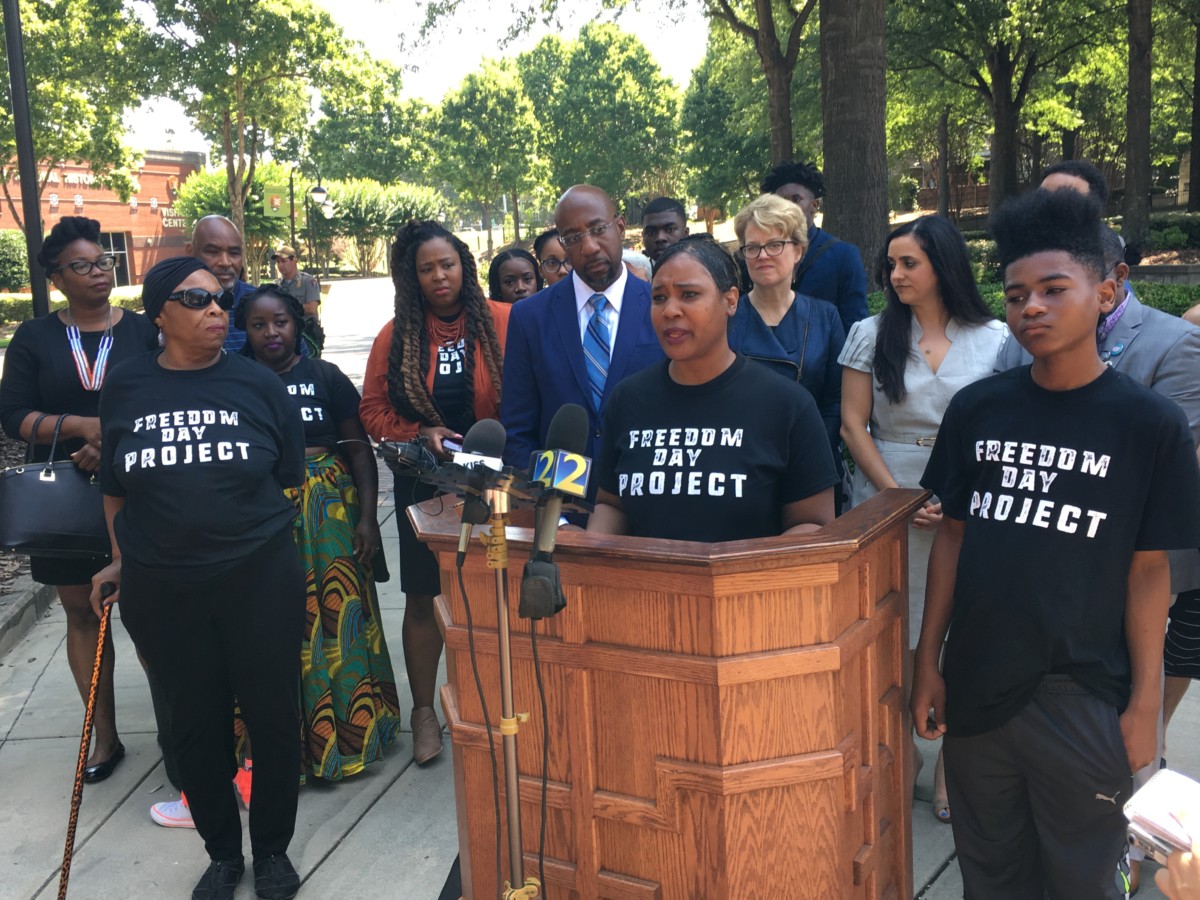 LaQuanda Smith was bailed out of jail by campaigners who say the system is unjust to poor folks who can't pay. "I was in there with people who had a thousand dollars bail and couldn’t even afford $100," said Smith, at a Tuesday press conference at Ebenezer Baptist Church. Credit: Maggie Lee
Share32
Tweet
Share
Pin
Pocket
WhatsApp
Buffer5
Email
Reddit
37 Shares

Campaigners looking to cut the nation’s incarceration rate say cash bail policies unjustly punish poor people who sit in jail awaiting trial as wealthy people bond out. Over the last few days, those campaigners in Atlanta have stepped up the action, starting by bailing out about 10 folks. 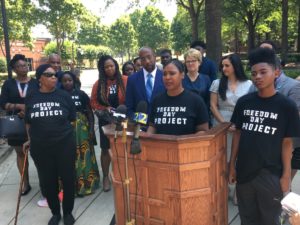 LaQuanda Smith was bailed out of jail by campaigners who say the system is unjust to poor folks. “I was in there with people who had $1,000 bail and couldn’t even afford $100,” said Smith, at a Tuesday press conference at Ebenezer Baptist Church. Credit: Maggie Lee

LaQuanda Smith said that if it wasn’t for the Freedom Day Project, she would still be sitting in jail, separated from her children.

“I was praying in there,” Smith said said, “and God sent them, so I thank God first, the Father in heaven for sending them.”

In jail, she and others “experienced things animals don’t even experience,” Smith said at a Tuesday press conference, standing in front of Ebenezer Baptist Church, the Sweet Auburn church at the front of the campaign.

And she pleaded for folks to take time out of their lives, from expensive trips and fancy vacations, to serve people.

“Please come and help the poor. It’s the sons and daughters at home crying, needing you guys,” Smith said. “Please serve the purpose that God has put you here for, he put you here to help and to serve. We are all servants of people.”

These first bailouts were meant to free people in time for Father’s Day and Juneteenth. But the bailout fund remains open for donations and the bailouts will continue, said Ebenezer Senior Pastor Raphael Warnock.

Warnock and others across the country say it’s unfair that people who can pay bail walk free as they await trial, while those who can’t pay sit in jail. He said it amounts to poor people being treated as guilty until proven innocent. His church is asking prosecutors to forego asking for bail by default for most things.

“While awaiting trial, you lose the things that matter the most, your family, your children, low-wage jobs that barely allow you to make ends meet. You lose your home or your apartment, your time, your freedom, your dignity. You will be punished,” said Warnock.

Tiffany Roberts, chair of the Ebenezer Baptist Church Social Justice Ministry, said that for bailouts, they’re taking referrals from public defenders, families, and even some bail bondsman who’ve reached out.

Public records show Smith had been in jail for about three weeks on two charges of false statements and that she had previously been booked for a day on a charge of shoplifting, two days before Christmas last year.

With Warnock and Smith at the podium in front of the church were more than a dozen supporters and fellow campaigners.

“We are here to say that it is not over,” Totonchi said. “This weekend it was Atlanta, it was Fulton County, DeKalb County. But this movement is growing. Columbus, Macon, Athens, Savannah, this movement is coming to a courthouse near you.”

But Warnock said campaigners don’t believe in pretrial detention and it certainly shouldn’t be based on wealth, no matter what the crime is.

“We reject this idea of debtor prisons, we reject this idea that one’s value or how dangerous one is is based on how much money is in your pocket,” Warnock said. “We are watching very wealthy, very well-connected people at the top of this country doing a whole lot of damage.”

For the church, the bailout is part of a larger focus on lowering the county’s incarceration rate. Its other activities include expungement events, where people get help clearing arrests that didn’t result in convictions from their public records.