Wini Hemphill giving a tour at South-View. Hemphill is the current director and a descendant of Albert Watts, one of the founders. (Image provided by Charmaine Minniefield.)

My great-grandmother’s name was Ora Lee Fuqua. She was born on a sharecropping plantation in Central City, Ky. We were owned by the Fuqua family, a prominent white family in the South and beyond. My work retraces her story by recalling the Ring Shout.

Praise houses were small wooden structures, initially on slave plantations, used for gathering and worship. It was in these secret, safe spaces that the Ring Shout was performed, a traditional African American movement practice taught to me by my great-grandmother. The Ring Shout was reborn in the Western hemisphere as resistance to laws intended to dismantle African identity and community. This full-body rhythmic prayer was performed as congregants would stomp, or shout, upon the wooden floors creating a communal drum, secretly preserving their identity and traditions — all while remembering freedom. My work recalls this prayer.

The Praise House Project is a community-based initiative that places multimedia, site-specific public art installations within communities to uphold the African American histories and narratives of the area and to address issues of erasure and systemic inequities. Each Praise House is a small wooden structure with a fully immersive digital projection installation of a Ring Shout, created from archives and/or footage collected from the community in which it resides, with a sound installation emanating from within, inviting gatherings in safe spaces, like praise houses once before.

Erasure for me is the removal of Black narratives past, present, and future, including the loss of history forgotten, safe and sacred spaces, and important places of belonging that house and inform cultural identity.

In partnership with Emory University in 2021, the Praise House at Oakland Cemetery was presented by Flux Projects. Over 800 unmarked graves of ancestors were displaced by the Atlanta City Council in 1866 when they were interred in a flooded area, in what is now the African American Burial Grounds of Oakland Cemetery. Raising the memories of those ancestors once lost, now found, the work held space for audiences to walk past Confederate monuments, enter the hallowed grounds for the first time and honor these ancestors.

The Praise House Project was awarded the prestigious National Endowment for the Arts “Our Town” grant with Emory University, in partnership with DeKalb County, in order to place multiple installations in three distinct locations within the metro — Atlanta area over the next two years, uplifting the African American histories of each community.

Through a residency at the Stuart A. Rose Library, I began to research my own history while reflecting on the history of the city. In 2021, I presented at Emory University’s conference titled, “In the Wake of Slavery and Dispossession,” a public dialogue on the history of race and slavery within higher education in anticipation of a Praise House resting next to Glenn Memorial Church on Emory’s campus in 2023.

Over the next two years, as I continue to research my own history, the work will invite audiences and communities to do the same — Sankofa, a Ghanaian concept “to retrieve.” The project draws from and offers access to such resources as the Slave Voyages database, housed at Emory. 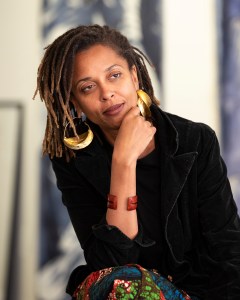 Charmaine Minniefield, a visual artist and activist, explores African and African-American history, memory and ritual as an intentional push back against erasure. Through a collaboration with Emory University, Minniefield was awarded the prestigious National Endowment of the Arts Our Town Grant to present her Praise House Project in three different locations in the metro Atlanta area to celebrate the African American histories of those communities.

DeKalb County is our municipal partner for the Our Town Grant. Connecting the groundwork, Dr. R. Candy Tate, CEO of Culture Centers International — a Praise House Project community partner — and I met Mr. Johnny Waites, a descendant of one of the founders of the oldest Black settlements in the metro Atlanta area, Flat Rock, located in what is now Lithonia in DeKalb County.

The land has ties to the Methodist church and to the indigenous Muscogee (Creek), living in those parts back when the county was first founded in the 1820s. He and the Board of Flat Rock Archives at Arabia Mountain, with the help of the county, are preserving the land, its history and the burial grounds of some of the area’s earliest Black citizens. The hope is to install a Praise House to visibly mark sacred burial grounds. The Board of the Archive has identified the need to gravel the road, place clear historic markers and create a perpetual care fund for the grounds. Developers are near and encroaching.

Mr. Waites drove us to the old Lyon’s house, sitting on land once farmed by enslaved families. We learned that 26 total individuals were housed in cramped basement quarters under the house. It reminds me exactly of the dungeons in Janjanburreh, the slave port village in The Gambia, West Africa, where I recently served as an artist in residence. The DeKalb community is working to restore the home.

Just as the story of Flat Rock does for DeKalb County, the South-View Cemetery offers yet another opportunity to tell a more complete story of our city. We are at a pivotal moment in Atlanta. We have a new mayor with deep ties and strong commitments to the arts and economic redevelopment in areas like South Atlanta.

From its beginning, South-View Cemetery was established as a place to honor the memory of Black lives. The website explains the commonplace horrors Black people suffered to bury their beloved.

Blacks had grown tired of the disrespect they were forced to endure in order to bury their family members and friends. They had to enter cemeteries through back gates and even wade through swamps to conduct funeral services. They were told, “If you don’t like it, start your own cemetery.” And so they did.

Established in 1886 by nine once enslaved and then freed Black businessmen, today, South-View Cemetery is the final resting place for over 80,000 African Americans, many of whom have made significant contributions to American history and the struggle for freedom and peace. Among the notables are civil rights activists including Dr. Martin Luther King, Jr. before being moved to the grounds of the Martin Luther King, Jr. National Historic Site and his parents, Rev. King, Sr. and Alberta Williams King, and her parents, A.D. and Jennie Williams; Bishop Henry McNeal Turner, entertainers the Whitman Sisters, educator Charles Lincoln Harper, entrepreneurs Alonzo and Adrienne Herndon, pharmacist Moses Amos and more recently, Congressman John Lewis.

South-View Cemetery is located in what was known as the Brownsville Community, a once thriving Black business and residential district in South Atlanta. The area was rattled during the 1906 Race Massacre when a white mob made its way across the city, tearing through Auburn Avenue and eventually working its way to Brownsville, just three miles south of the city. The mob targeted these burgeoning Black communities in order to interrupt their rising economic potential.

The victims rest at South-View Cemetery. Dr. Tate, an Atlanta native and historical preservationist recognized for her leadership in championing the restoration of such Black heritage sites as Fountain Hall at Morris Brown College, states: “Sites of our African American memories are as much, if not more, our cultural responsibility to ensure reverence, historical accuracy and perseverance. We remember the past to understand the present to make the future better for us all.”

A testament to the resurgens spirit of Black community, a quiet pantheon of lives devoted to service and excellence, South-View Cemetery asks, “What can this city become? What kind of life can I live?” The stewards of South-View Cemetery are also working to build a perpetual care fund to restore the historic part of the cemetery. As the City of Atlanta and DeKalb County plan for the future of the South River Forest, we want to hold space for our Black history that is preserved at South-View Cemetery and the surrounding, profoundly significant area.

As we contend with this country’s complex past and the persistent residual effects of White supremacy and racial injustice, the work asks, “How do we hold space?” “How do we remember?” As the city considers the fate of such places as the Chattahoochee Brick Company, how do we remember something like convict labor in the South and its legacy from Reconstruction to the present? As we consider future use of spaces, what histories might be displaced? How might we resist erasure? How do we hold space for reconciliation?

Just as my great-grandmother, Ora Lee Fuqua taught me, I draw upon the Ring Shout and the spiritual inheritance of the Praise House. I believe that by remembering our stories, by preserving our Black narratives, and by acknowledging our history with respect, we create a sense of belonging. Belonging enables the agency communities require to address the causes of violence and inequities which persist in order to finally envision and build a new freedom.

The next Praise House Project event marks the launch of the project at Emory with a celebration of “Indigo Prayers” a solo exhibition by Charmaine Minniefield Michael C. Carlos Museum with a conversation and performance of the Gullah Geechee Ring Shouters on Aug. 28 at 1:30 p.m. Click here for more information.