One of Georgia’s leading scientists – Dr. Carlos del Rio – declared the nation had failed in how it responded to the Coronavirus pandemic.

Dr. del Rio, a professor of medicine in the Division of Infectious Diseases at Emory University’s School of Medicine and executive associate dean for Emory at Grady Health Systems, made his remarks on Monday as part of a panel discussion held after Georgia Tech awarded Dr. Anthony Fauci with the 2021 Ivan Allen Jr. Prize in Social Courage. 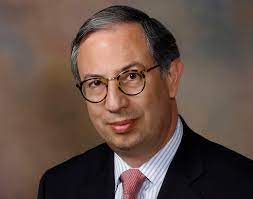 “First thing, candidly, is we have to acknowledge that we failed in our response to this pandemic,” Dr. del Rio said at the outset. “Yet, we thought we were prepared. We had pandemic plans.”

A global security index had even ranked the United States as No. 1 in being prepared for a pandemic – but that was before COVID-19 had emerged as the biggest global health threat in more than a century.

Despite its No. 1 ranking, Dr. del Rio bluntly said the United States ended up being the “country with the biggest failure rate.”

He based that statement on the fact “we represent less than 5 percent of world’s population” but we’re averaging 23 percent to 24 percent of all COVID deaths.

“So, obviously we have to recognize that we failed,” Dr. del Rio said. “Why did we fail? What parts were we not able to prepare for? The No. 1 failure in our country was a failure of leadership. And leadership is critical in a time of crisis. Everybody in the business community knows that. And if we don’t have the right leader in a time of crisis then you’re going to fail.” 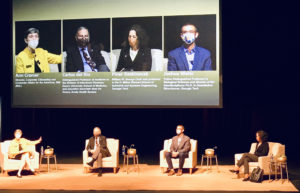 The second reason the United States failed, according to Dr. del Rio, was that the country had “weakened” the very institutions that it needed to respond to a pandemic – citing specifically the Centers for Disease Control and Prevention and the Federal Drug Administration.

Dr. del Rio said that “sidelining the CDC” was particularly egregious “because it was, first of all, it’s personal. It’s here in Atlanta. It’s part of our community. It is our friends, our neighbors, the people that we know have the expertise. We know the value the CDC has as a global health agency, and to see CDC essentially moved out of the response early on, in my mind, was clearly one of the greatest mistakes we made.”

The third reason we failed, according to Dr. del Rio, was that we did not let science rule the day.

“We let politics guide response,” Dr. del Rio said added that public health has always had political overtones. “But it has never been partisan. In my wildest dreams, I would have never dreamt that a face mask will become a political symbol.”

He also is disturbed by recent polls that show there’s greater vaccine hesitancy among Republicans than Democrats.

“This doesn’t make any sense,” Dr. del Rio said. By making public health so political, it has “weakened our response.” 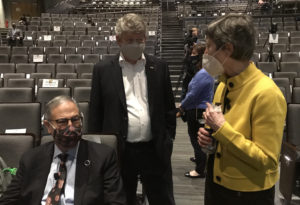 “Our public health system is typically run at the state level,” Dr. del Rio said. “You cannot run a pandemic response on a state level., It’s like trying to run a war. You will not go to war and tell every state to recruit your own soldiers… We would have never won the second World War by saying here is the Georgia army, here’s the Massachusetts army. That’s not how a country responds. Having had 50 different response plans throughout this pandemic I think was a major problem.”

Case in point, Dr. del Rio pointed to how the vaccination distribution plans varies from state to state.

“There’s no national plan,” Dr. del Rio said. “At some point in time we’re going to have to look at those issues, because if not, we will fail again with the next pandemic.”

Later in the program, Dr. del Rio did mention some bright spots. The pandemic showed the “value and triumph” of science and research. That investment paid off in the ability to develop COVID vaccines in record time.

Health care workers also gave people reason to home by their willingness to put themselves at risk while treating the sick. 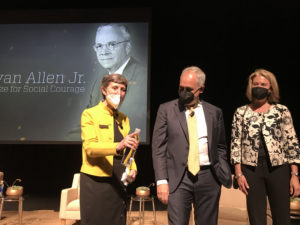 “People could have walked away and say, ‘Look I don’t need this job I don’t need to put myself at risk. I can go somewhere else,’” said Dr. del Rio, adding that instead public health workers showed their compassion. “We need to think about how we capitalize on that. How do we get away from our individualistic selves and really move into more of a community approach?”

Lastly, Dr. del Rio said the pandemic exposed the health disparities and social inequities in our society – including housing, education and food access.

Addressing those issue “potentially will be a positive, bright side of this pandemic,” he said. “We may eventually come out of this really taking equity and justice as a much more serious thing than we’ve done up to now.”