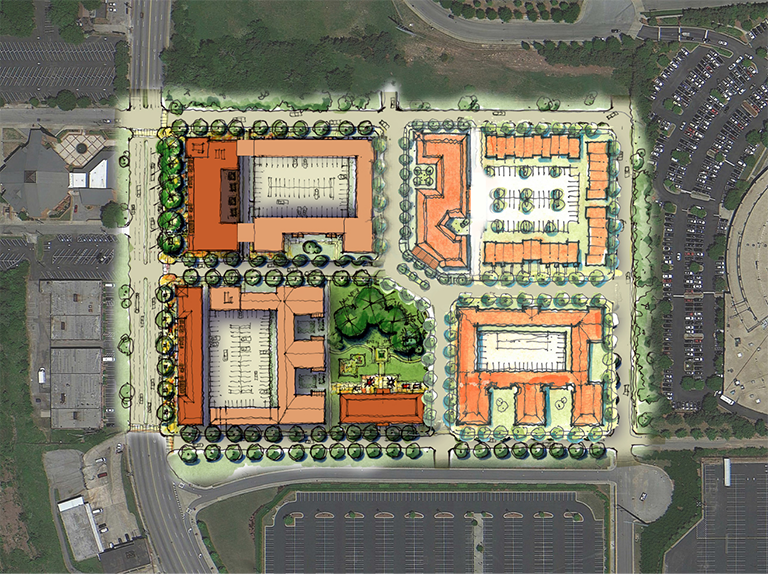 The senior units are slated to go in the middle building at the top of the blueprint. (credit: Herndon Square LLC)

It’s been some 10 years since the last tenants moved out of the old Herndon Homes apartment complex, which was subsequently razed to make way for a new mixed-income community. Since then, though, some former residents have been tapping their feet, wondering if and when they can move back in, as was promised years ago.

During last week’s Atlanta Housing meeting, the authority’s board of commissioners announced the first phase of the replacement project would finally break ground in January. That is, assuming AH secures a federal 4-percent Low-income Housing Tax Credit and a letter of acknowledgement approving Phase 1’s financial closing from the U.S. Department of Housing and Urban Development.

Over the years, however, the plans for the 12-acre, potentially 700-plus-unit residential project, spearheaded by Hunt Development Group, have morphed considerably—in some ways, to the chagrin and confusion of former residents.

Herndon Square’s first phase, for instance, is now expected to include an additional $3 million for public infrastructure improvements at the site, which sits at the corner of Northside Drive and Cameron Madison Alexander Boulevard, according to a presentation given during the meeting.

Phase 1 is also expected to produce 97 residences—rather than the 105 planned as of November 2017—priced at below 60 percent of the area median income (AMI), but for seniors only—news that, when announced in 2017, surprised and irked some people eager for new affordable multi-family units.

The long delay seems to be due in large part to recent leadership shakeups at AH: Acting CEO Joy Fitzgerald, who had previously served the housing authority for about 12 years, took the helm of AH after Catherine Buell resigned in 2018 with 18 months left on her contract. Now, Chicago’s former housing chief Eugene Jones is gearing up to take the reigns on October 7.

Nonetheless, Atlanta Housing and City of Atlanta officials are celebrating the long-anticipated project moving forward. “This is long overdue,” said vice chair of the board Robert Rumley. “This is exciting.”

Herndon Square, which is supposed to designate more than 40 percent of its 700 units as “affordable,” is also likely to be a major point of conversation at Saturday’s English Avenue Neighborhood Association meeting, which is scheduled for 10 a.m. at the Promise Center.

All said and done, the development would feature 718 residences in the form of apartments and townhomes, 337 of which would be considered affordable.