A lawsuit that involves issues of environmental justice, sustainable construction materials, and the rule-making processes of a new city continued Wednesday in DeKalb Superior Court. 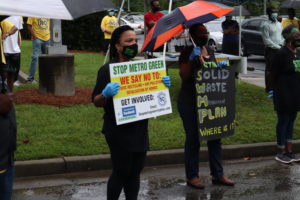 Residents of southeast DeKalb County gathered to protest the construction and planned operation of a recycling facility for construction debris in the City of Stonecrest. Credit: The Rev. Michael Malcom, of The People’s Justice Council

DeKalb Superior Court Judge Tangela Barrie had instructed the parties at a hearing last week to submit by Wednesday any information they want her to consider. Barrie is handling the case brought by the City of Stonecrest and is considering a request from some residents of unincorporated southeast DeKalb County to join the case.

The three defendants are a recycler of construction debris into building materials, Metro Green Recycling; DeKalb County; and the state’s Environmental Protection Division, of the Department of Natural Resources.

The heart of the issue is whether Metro Green legally obtained the license it received from the state EPD to operate a recycling facility at 2544 Miller Road.

DNR has contended that the permit was issued legally.

Stonecrest and the residents seeking to join the case contend Metro Green concealed information and deceived EPD with an unlawful certification from a new city that had no authority to grant it. 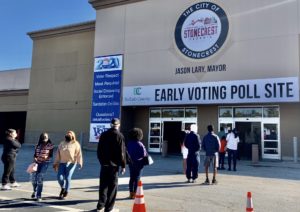 The issues involving environmental justice and sustainable building materials are attached to the situation.

The EJ issue relates to a recycling center for construction materials in a region of southeast DeKalb. This region has a decades-long history of being home to a large proportion of Black residents. The area once was mostly rural, centered around the City of Lithonia, and had a scattering of houses and industrial properties. Now, the region’s population has increased significantly and remains home to a large Black residential population.

Also swirling around the EJ issue are complaints that the region is not covered by the county’s plan to stop leaks of raw sewage from its aged sewerage system. The plan does cover regions that are home to a majority proportion of white residents. This plan is now being reviewed by a federal judge as a revision to a consent decree among the county, EPA and EPD. A group that represented predominately Black homeowners sought, unsuccessfully, to intervene this past summer in the pending revision. 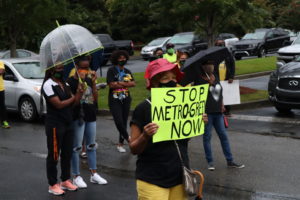 A planned facility to recycle construction debris is opposed by residents of south DeKalb County. Credit: The Rev. Michael Malcom, of The People’s Justice Council

The issue for residents of unincorporated DeKalb County, regardless of other issues, is the prospect of an industrial recycling center that’s being built near hundreds of houses and within a half-mile from Miller Grove Middle School.

“We are not willing to compromise the quality of our air, water, and our livelihoods for the sake of a polluting facility that does not belong here,” Renee Cail, president of CHASE, said in a statement issued Nov. 18. “South DeKalb neighborhoods should not have to bear the brunt of the environmental injustices and health risks that come with these types of industrial facilities, and we will not stand for having our backyards used as a dumping ground.”

CHASE is now represented by the Southern Environmental Law Center. CHASE, the acronym, stands for Citizens for a Healthy and Safe Environment.