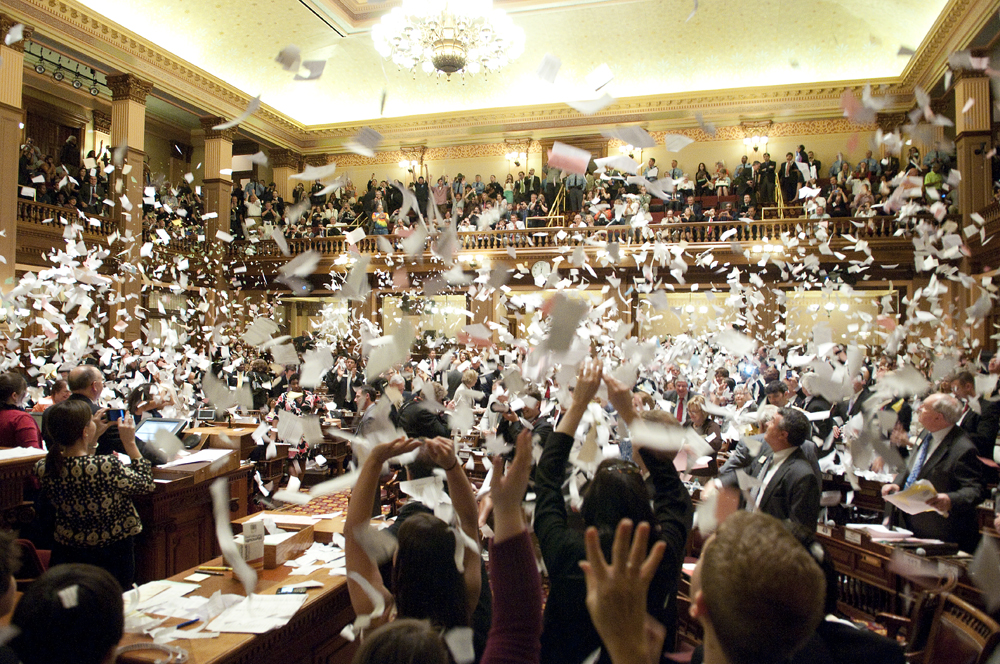 Sine Die at the Georgia Capitol in Atlanta. At midnight, on the 40th and last day of the Georgia legislative session, lawmakers celebrate by throwing their papers from the legislative session into the air. Photo used with permission by Joeff Davis.
Share20
Tweet
Share
Pin
Pocket
WhatsApp
Buffer6
Email
Reddit
26 Shares

There’s always enough mischievous stuff most people haven’t heard about to inject some drama into the last day of a legislative session, but after an energetic Friday, this one’s mark on history seems firmly set.

It was, in its way, an ambitious session. We can say that before any confetti flies. It took on the long-dreaded Certificate of Need reform, allowed Gov. Brian Kemp to fulfill campaign promises with the “heartbeat” abortion bill and the Medicaid waiver, and fumbled like a kitten with some of the big issues in transportation as the Delta fuel tax break teetered precariously in the balance. Given a new governor and lieutenant governor and an unexpectedly vulnerable speaker, that was a full plate.

But for all the national and even international attention briefly brought to bear on the abortion bill, this has been a session eclipsed by developments elsewhere.

The Trump administration had already announced its renewed intention to get the entire Affordable Care Act declared unconstitutional before Kemp’s Medicaid waiver, and the CON agreement worked out under the watchful eye of the White House as a condition for accepting the waiver, reached passage Friday.

According to Kemp spokeswoman Candice Broce, federal officials urged that the state continue to seek a waiver, to “keep moving forward with our game plan.” The hospital and medical groups which warred over CON depart from the Golden Dome in an uneasy truce, meanwhile, and rural hospitals remain in a state of crisis.

For all the transportation proposals packaged and repackaged in the General Assembly, nothing this session does is likely to have the impact of the Gwinnett County MARTA referendum, which proved how difficult the kind of consensus envisioned in the big Metro transit expansion bill passed last year will be to achieve.

The chicken game between the House and Senate over the Delta exemption and the airport takeover attempt was still unsettled going into the 40th and final day, but the issues have become so entangled it seems likely that if anything gets done, it will be revisited fairly quickly.

In terms of its impact on Georgia ratepayers and American taxpayers, nothing this year’s session did will come close to the $3.7 billion in loan guarantees to finish the two new nuclear reactors at Plant Vogtle announced last week by Energy Secretary Rick Perry.

Speaking at the site near Augusta, Perry called the project “the real Green New Deal.” That was a joking reference to the Green New Deal environmental plan backed by some Democrats, but it was the truth in another way as well. With not much national notice, this was the commitment of nearly as much as the $4 billion for the border wall which the administration shut down the government and fought with Congress over earlier this year. This is to continue a project which has already run up $27 billion in costs, and to make nuclear energy, in Perry’s words, “cool again.”

Nothing this year’s General Assembly did is likely to have as much effect on the state as these developments in the past couple of weeks, but it was the “heartbeat” abortion bill which generated the most rhetoric in the well and demonstrations in the hall.

Its future in the courts is precarious, but the bill is already having an important impact on politics. At a rally in Dalton over the weekend, Democratic candidate-in-waiting Stacey Abrams suggested that the passage of the bill made her more inclined to seek a rematch governor’s race against Kemp than a U.S. Senate race against David Perdue.

Whatever Abrams does affects what every other Democratic hopeful does over the next year or two. But whatever she does, the losing battle over this bill has given a new wave of Democratic women, like Sen. Jen Jordan, much wider visibility. And it makes it more likely that by the end of his term, Kemp will be dealing with a legislature even more sharply divided between rural Republicans and urban Democrats.