A scene from "Everything Everywhere All at Once"

“This is crazy,” says Evelyn (Michelle Yuen), a seemingly ordinary housewife beleaguered by laundry and taxes.

Only, crazy can’t begin to describe the head-spinning delirium that is “Everything Everywhere All at Once.” After maybe, 10-15 minutes of normal stuff – taxes, laundry, family tensions – this movie takes off into some of the most imaginative and just plain what-tha’-??????? territory you’ve ever seen.

To repeat, Evelyn is a put-upon Chinese-American woman, with a goodhearted milksop (Ke Huy Quan) for a husband, a cranky wheelchair-bound father (James Hong) and the aforementioned daughter who’s happily involved with her lesbian girlfriend (Tallie Medel) – a problem, it turns out, for overly-critical, decidedly old-fashioned granddad. 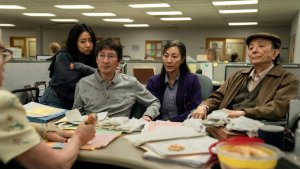 A scene in “Everything Everywhere All at Once”

Never mind most of this because in minutes, we’re jerked out of this plot and hurled into a dozen other storylines. See, Dr. Strange may have his Multiverse, but Evelyn has her Alphaverse. And there’s not just one Evelyn; there are thousands. One is a movie star (very much in the mode of Yuen herself). Another is a chef. A third, a Peking opera singer.  A fourth, a rock (yes, you read that right)

But beneath all the chaos and meta-blast of pop-culture references, the filmmakers, Daniel Kwan and Daniel Scheinert (collectively known as “Daniels”), offer profound, disturbing and unexpectedly poignant meditations on the nature of existence.

Remember that old Gwyneth Paltrow movie, “Sliding Doors,” where whether she make a subway train or not leads to two separate destinies?

Now explode it into a million pieces. “Everything Everywhere” insists even the tiniest decision creates a new reality. Thus, the myriad versions of Evelyn (and her husband and the others) in a myriad of existences.

They are brought to a head on this particular day – when the family is going to see an IRS auditor (played with impressive small-mindedness by Jamie Lee Curtis) – by an all-powerful being cursed with experiencing every world all at once. She’s ready to do the whole thing in. And the only one who can stop her is Evelyn – the laundry-and-taxes Evelyn. 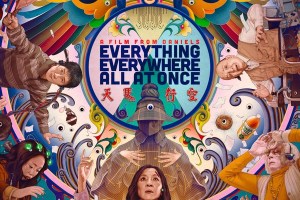 Movie poster for “Everything Everywhere All at Once”

“But I’m no good at anything,” our Evelyn protests to a more heroic variation of her sweet husband. “Exactly,” he explains. “You’re capable of anything because you’re so bad at everything.”

“Everything Everywhere” piles on so much that it’s always in danger of spinning out of control. Luckily, it’s both anchored and buoyed by its superb cast.  Especially Yuen, who’s been slightly miraculous in every movie she’s ever made.

If there’s anything to complain about, it’s simply that, at 139 minutes, the picture is a tad too long. It’s like an acid trip you’d like to come down from about 15 minutes before the drug is done with you.

Yep, it’s that kind of picture.

“Everything Everywhere All at Once” is showing in metro Atlanta movie theaters, and it is streaming on Amazon Prime.