The issue of how to harness the economic power of the future Falcons stadium in order to create jobs for lower income residents of nearby neighborhoods has received scant attention in the discussion to date. 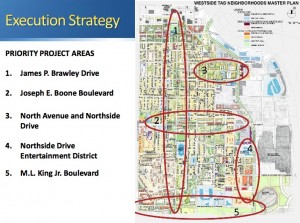 The new redevelopment plan for the stadium neighborhoods envisions the creation of 1,300 jobs inside the five ovals. Click on the image for a larger version. Credit: Invest Atlanta

Now the jobs forecast is in: 1,300 new jobs are predicted in the city’s redevelopment plan that covers English Avenue and Vine City, but not Castleberry Hill – which is supposed to be part of the deal. Of these jobs, 47 appear to be temporary construction-related jobs; 891 appear to be permanent jobs in retail shops and a hotel; and the tasks associated with 362 jobs are not specified in the plan.

There has yet to be a significant discussion of the creation of local hiring program to give nearby residents a first crack at these jobs – let alone jobs building the stadium.  Yet such a program is not new ground, because Atlanta has established provisions relating to jobs in previous community benefits deals for projects including the stadium now called Turner Field and the Atlanta BeltLine.

The discussions at the five public meetings of the Community Benefits Plan Committee conducted since July have dwelled largely on two issues:

There has been little, if any, conversation about providing access to jobs building the stadium. Such hiring appears to be required by legislation adopted Feb. 4 by the Atlanta City Council.

The legislation adopted in February appears to specify that qualified, low-income city residents be hired for jobs created when the city provides financing through the type of bonds Atlanta intends to issue to provide $200 million in construction funding for the stadium.

The task of creating a community benefits deal was mandated by the legislation by which Atlanta authorized the sale of $200 million in bonds to help pay for the $1 billion stadium. The bonds cannot be sold until the city and residents come to agreement on a community benefits plan. An initial deadline of Oct. 2 has been deferred to an unspecified date.

Deborah Scott, executive director of Georgia Stand Up, continues to press the Community Benefits Plan Committee to include a local hiring program in the final community benefits deal. 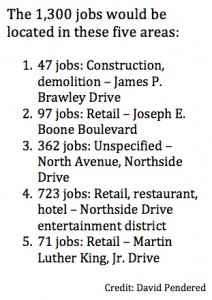 Scott has distributed packets of information that provide examples of local hiring programs that were enacted as part of community benefits agreements in other cities. Two examples include:

Atlanta’s previous deals regarding local hiring include the construction of the Olympics Stadium, which was converted to Turner Field. The results of that negotiation was touted as a success by labor organizer Stewart Acuff in his book, “Playing Bigger Than You Are,” and heralded by state Sen. Vincent Fort (D-Atlanta), who participated in the negotiations.

Another of Atlanta’s community benefits program is not viewed as a tremendous success. It involves the Atlanta BeltLine and observers including Mike Dobbins, a former city planning commissioner who now oversees studies of the stadium neighborhoods in his studios at Georgia Tech, contend the process is less than transparent and less than productive in terms of providing opportunities to low income residents.

The redevelopment plan that was recently posted on the Invest Atlanta website predicts the creation of 1,300 jobs as part of its vision for the future of five corridors in the Westside TAD.

The plan has been presented by Jesse Wiles, president of APD Urban Planning and Management, LLC, which did the work under a contract with Invest Atlanta. Wiles said the plan includes some of the recommendations from the Tech studios.

The Falcons and Georgia World Congress Center have not been represented at the meetings of the community benefits committee. Atlanta Mayor Kasim Reed’s representative addressed the absence of the Falcons at the Sept. 4 meeting.

“I know it has not been technically necessary for the Falcons to come until locations and all negotiations are final,” Taylor-Parks said. “We are close to finalizing those. If they were to come, you’d have a two-sided conversation.”

Previous Article
Searching for the poet James Dickey, finding beauty in the grotesque
Next Article
Shortened calendar for 2014 races has time for surprises