A scene from "Fantastic Beasts: The Secrets of Dumbledore"

In the real world, J.K. Rowling is having her problems. Alas, in the Wizarding World she first created with her Harry Potter books, all is not exactly well either.

The Further Adventures of Newt Scamander or, as it’s known here, “Fantastic Beasts: The Secrets of Dumbledore,” is something of a hot mess.

Despite another endearing performance by Eddie Redmayne as magizoologist Newt Scamander and an impressively sinister one by Mads Mikkelsen (replacing Johnny Depp) as the imperious and evil Gellert Grindelwald, “Secrets” is overpopulated and underwritten. Oh, there’s plenty of plot, but it comes at us in so many bits and pieces that nothing hangs together. An image of “Fantastic Beasts: The Secrets of Dumbledore”

The movie, which globetrots from Berlin to Bhutan, takes place in the 1930s. Dark forces on the rise in Germany are mirrored by a similar movement among witches and wizards.  Magical fascism anyone?

Anyway, Grindelwald now wants to be elected head of the International Confederation of Wizards (or something like that). And Hogwarts-headmaster-to-be, Albus Dumbledore (Jude Law), can’t move against him directly. That’s because years earlier the two young lovers swore a blood troth to each other. So, in order to stop his former beloved, Dumbledore must summon a sort of Mystical Magnificent Five. 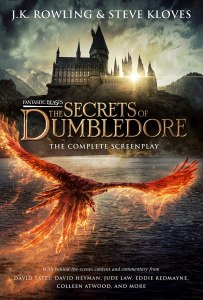 A poster of “Fantastic Beasts: The Secrets of Dumbledore”

Plus, we get Kowalski’s love interest, Queenie (Alison Sudol), a possible Dumbledore relative (Ezra Miller), a sexy French wizard (William Nadylam) and maybe a half dozen others.

As for the promised Fantastic Beasts, they are far fewer and farther between. There are some dangerous scorpion-crabs, snippets of a soaring phoenix and cameos by a few favored creatures from the earlier movies. Most important is an adorably Bambi-ish thingie called a Qilin that, thanks to its innate ability to recognize the pure in heart, becomes central to the upcoming wizard election (maybe we could use one of those in 2024).

The movie moves along in fits and starts. It’s a measure, I’m afraid, of just how ineffective “Secrets” is when one of the film’s most soaring moments is a brief return to Hogwarts. That immense dining hall never seemed so, well, magical.

Previous Article
Making the case for college in these challenging times
Next Article
CHaRM by Live Thrive: Atlanta’s recycling facility that accepts nearly everything