‘Far from the Madding Crowd’ – luscious take on Hardy book 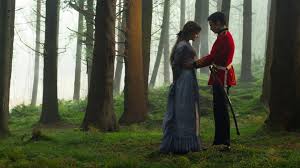 That’s one take-away from this pastoral beauty of a movie.

Another is, bad boys have more fun. At least, initially.

A feminist take on “Far from the Madding Crowd” may not be exactly what Thomas Hardy had in mind in 1874. However, consider this line of dialogue, lifted directly from the book: “It is difficult for a woman to define her feelings in language which is chiefly made by men to express theirs.”

The woman who possesses this strikingly modern sentiment is Bathsheba Everdeen (Carey Mulligan), who, when the movie begins, possesses little else… aside from a lovely face and an independent spirit. 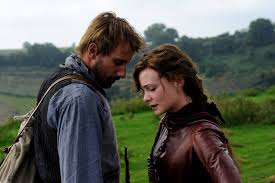 Scene from “Far from the Madding Crowd” movie

Her fortunes change when she inherits a farm from a distant uncle. Upon arrival, Bathsheba makes it clear she both intends to run the place herself and to get down in the muck with everyone else.  Sheep dipping never looked like so much fun.

One is too this; the other is too that; a third is just right. However it will take the length of the film for Bathsheba to come to her senses and realize what she always wanted was right before her eyes.

In the meantime, there are country matters to be dealt with. Danish director Thomas Vinterberg gives us shimmering wheat fields and intimate insect close-ups —  “Days of Heaven” meets Millet’s “The Gleaners.” And while the picture lacks the glamor of John Schlesinger’s 1967 film, it’s a great deal less ponderous, coming in closer to two hours than its predecessor’s three.

Vinterberg’s version is also easier to relate to. Schlesinger drenched his film in iconic star-power. Alan Bates (Oak) had just played the merry Peter Pan-ish cad in “Georgy Girl.” Terence Stamp had leant his high cheekbones and golden beauty to everything from “Billy Budd” to “The Collector.” 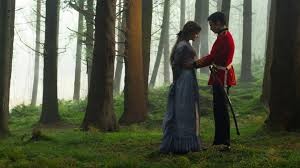 And Julie Christie was, well, Julie Christie — perhaps the  “It Girl” of the mini-mod mid-‘60s. She quivers quite fetchingly, but she’s not yet the actress she became in time for “McCabe and Mrs. Miller.”

However, if his co-stars suffer somewhat in comparison to their ’67 incarnations, Sheen is really quite remarkable as Boldwood. Whereas Peter Finch looked more like a thwarted Mr. Rochester, who’d somehow wandered over from “Jane Eyre,” Sheen finds dimension and a wistful soul in this middle-aged man who has everything he desires except someone to share it all with.

“Far from the Madding Crowd” is luscious in its own way. And imminently rewarding. Vinterberg and his cast, intentionally or not, have reclaimed Hardy from the psychedelic swirl of the Swingin’ 60s and given us more of the novelist himself. Maybe it’s time for someone to look into a remake of  “Tess of the d’Urbervilles.”