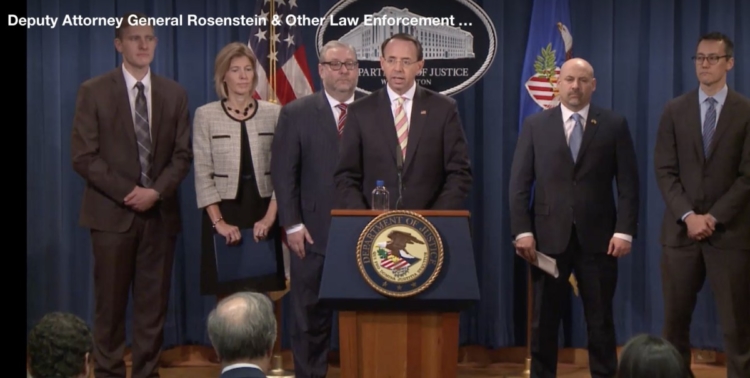 Deputy Attorney General Rod Rosenstein (at podium) and other federal officials released Wednesday a federal indictment of two men charged in a ransomware attack on more than 200 public entitites in the United States and Canada. Credit: justice.gov

The cyber attack that crippled the City of Atlanta starting in March was part of a assault on more than 200 public entities in the United States and Canada conducted by two men based in Iran who demanded payment in Bitcoins in exchange for keys to unlock ransomware they had installed in victims’ computer systems, according to a federal indictment released Wednesday in New Jersey. 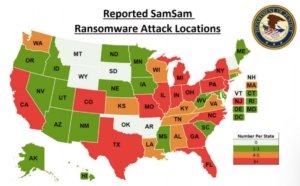 Georgia is among the states that were attacked more than six times by the ransomware allegedly created and installed by two men operating inside Iran, according to a federal indictment. Credit: justice.gov

Prosecutors did not cite any local law enforcement agencies in the United States for working on the case. Agencies that were cited include the Justice Department, two British agencies, and Canada’s Calgary Police Service and Royal Canadian Mounted Police, according to remarks prepared for delivery by Assistant Attorney General Brian A. Benczkowski.

Atlanta was of two major cities that were targeted in the scheme, according to remarks prepared for delivery by Deputy Attorney General Rod J. Rosenstein:

Atlanta did not pay a ransom and the attack was estimated to cost the city up to $17 million. 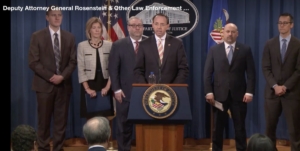 Deputy Attorney General Rod Rosenstein (at podium) and other federal officials released Wednesday a federal indictment of two men charged in a ransomware attack on more than 200 public entitites in the United States and Canada. Credit: justice.gov

Rosenstein said the defendants focused on public entities because, “they knew that shutting down those computer systems could cause significant harm to innocent victims.”

Their scheme involved installing the malware and demanding payment to provide decryption keys needed to unlocked the computers, and a threat to delete the decryption keys if the ransom demand was not paid, according to the indictment that was filed Monday and the subject of a briefing Wednesday.

The two defendants have not been arrested and now are fugitives. The FBI’s executive assistant director, Amy Hess, said in a statement the indictment shows the U.S. district attorney’s office in New Jersey will pursue such criminals, “no matter where in the world they may seek to hide.”

The two men allegedly conducted a 34-month-long international computer hacking and extortion scheme involving a malware they wrote. The “SamSam Ransomware,” was capable of forcibly encrypting data on the computers of victims, according to a statement by the Justice Department.

The hackers first created SamSam in December 2015 and created updates in June and October 2017, according to a statement. To commit their attacks, the two hackers used Bitcoin exchangers in Iran, and also overseas computer infrastructures, according to the statement. 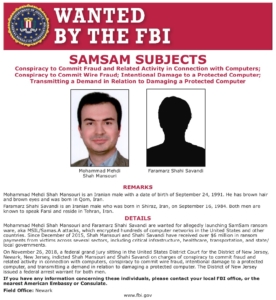 The FBI issued this wanted poster for two men who allegedly installed ransomware in the City of Atlanta’s computer system and more than 200 other public entities in the United States and Canada. Credit: fbi.gov