Fighting for the Future of Atlanta’s Chattahoochee Brick Site

The former Chattahoochee Brick Company site holds both environmental and historic importance, and we’re proud to have helped secure its protection. We could not accomplish this or any of our important conservation projects across the city without working in partnership with organizations and passionate individuals. Meet an Atlanta native and community champion we partnered with to make this outcome a reality.

From the late 1800s through early 1900s, the Chattahoochee Brick Company churned out up to 300,000 bricks per day through its extensive use of convict lease labor, which forced hundreds of mostly African American men to work in horrific conditions like those experienced during antebellum slavery. Today, the site of its former operations is owned by the City of Atlanta and is on a path to becoming a city park and memorial. Helping to preserve this site is one of The Conservation Fund’s highlights of 2022 — and a culmination of years of work to build the deep relationships we’ve formed with community members and groups over the years.

In fact, many of our conservation priorities are identified by communities and individuals who refuse to settle for more pollution, industry and environmental degradation in their neighborhoods. Leaders like Donna Stephens, a native of Atlanta whom The Conservation Fund has been proud to work with for more than a decade. As co-chair for the Proctor Creek Stewardship Council and a graduate of the Fund’s sponsored Atlanta Watershed Learning Network, Stephens has been instrumental in the growth of our Parks with Purpose program as well as advocating for the health of the Proctor Creek watershed.

It is safe to say that few people know these watershed neighborhoods better than Donna Stephens. Stephens grew up in a family that valued environmental responsibility and has lived most of her life within one mile of the former Chattahoochee Brick Company site. Stephens shared, “Honestly, when I was a little girl (and this is really going to date me), the Smokey the Bear commercials and the U.S. Forest Service’s ‘Give a hoot, don’t pollute’ Woodsy Owl campaign really had an effect on me. My parents never allowed me or my sisters to litter, and I can remember being very concerned about what would happen when the landfills filled up. When I started working at Proctor Creek Stewardship Council, that sense of environmental concern really reemerged. I started to pay attention to everything from E. coli in the water to where the barges take the trash and how much smoke is in the air.”

Stephens’ awareness of the former Chattahoochee Brick Company site extends beyond just living nearby. The 77-acre property sits on the banks of the Chattahoochee River at the confluence of Proctor Creek, where she has a long history of working with neighborhoods to address stormwater flooding. But it wasn’t until she watched the documentary “Slavery by Another Name” that she realized the cultural and historical significance of this place so close to home.

“Slavery by Another Name” author Douglas Blackmon holding bricks from the site (left) and crumbling foundation walls on the property (right). Photos by Stacy Funderburke.

The convict lease labor system is an important historical injustice that is not widely known. Important buildings in Atlanta, and around the country, are built with bricks made by Black men forced to labor against their will in the convict lease labor system at Chattahoochee Brick Company. “Saying ‘our ancestors built America’ seems like such a simple statement, but the magnitude of that sentence is phenomenal,” reflected Stephens.

The fuel depot and rail terminal development proposed by Lincoln Terminal Company would have perpetuated the long history of industrial use along the river and would have destroyed any chance to memorialize the brick workers who lost their lives onsite under the convict lease labor system. “This is a heavily industrialized area and the people who currently live here are already under siege when it comes to quality of life, air, water, ground pollution, chronic disease… you name it,” Stephens said. “I could not see another potentially beautiful greenspace destroyed, especially with the historical and cultural elements that are involved.”

Stephens refused to allow the story of the Chattahoochee Brick workers continue to go unseen in a country still reckoning with racism and its consequences in daily life. She started a campaign to save the site and was joined by neighborhoods and community members who eventually convinced the city to fight this development. After working with so many established organizations, Stephens founded her own nonprofit and named it the Chattahoochee Brick Company Descendants Coalition. 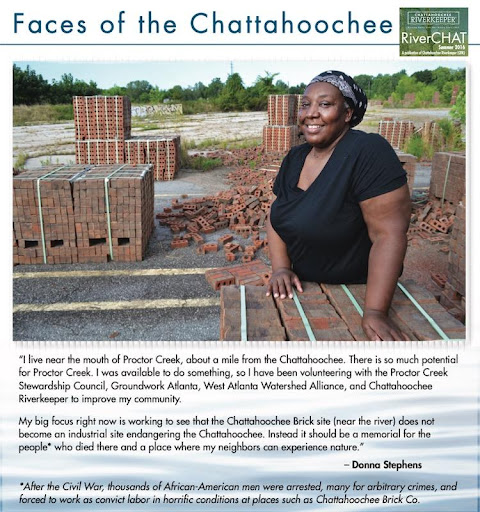 In the summer of 2016, Donna was featured in Chattahoochee River Keeper’s publication RiverCHAT. The article features a memorable photo of her in front of bricks onsite and captures her goal to protect the site.

“The Chattahoochee Brick Company Descendants Coalition came about because I wanted to include the network of people, agencies and groups who’ve helped me in big and small ways get to where we are today,” said Stephens “The list is vast, including organizations like The Conservation Fund, Georgia Tech, Georgia State University, Park Pride, Trust for Public Land, West Atlanta Watershed Alliance, Proctor Creek Stewardship Council, Eco Action, the Whittier Mill Neighborhood Association, Spelman, Morehouse, Emory… the list goes on and on!”

In 2020, it became clear that the Lincoln Terminal development was not going to go forward, which provided a window of opportunity for The Conservation Fund to step in and negotiate for the preservation and conservation of the property. In recognition of its historic importance, the site was designated by the Georgia Trust for Historic Preservation as one of their 2022 Places in Peril, making the top 10 sites of endangered historic places in need of preservation. The Fund purchased the property in June 2022 and transferred it to the City of Atlanta in August 2022. Plans for the future greenspace will be decided in collaboration with the community and may include environmental and ecological components such as new trail connections, a nature center and public river access, as well as an interpretive center, memorial site and healing garden to honor the site’s cultural and historical significance. 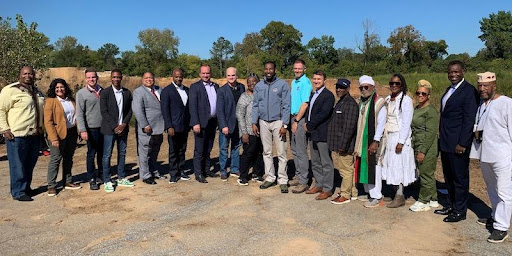 Donna Stephens and Atlanta Mayor Andre Dickens stand centered among attendees and speakers who gathered on September 24, 2022 to celebrate the City of Atlanta acquiring the property, and to talk about what comes next. Photo courtesy Stacy Funderburke.

Passionate community champions like Donna Stephens create the space for us to do the most important conservation work in the country, and we are privileged to help make their vision a reality. Looking back on this journey, Stephens admits it was a rollercoaster ride, but if she could send one message to herself at the beginning of the project she would like to tell herself that it will all be worth it. “I’d tell myself that we made it! There were always people who said, ‘You can’t… that’s too big a battle… you might as well forget about it.’ But I would like to tell myself back then — and anyone doing similar work today — that if there’s something you really want, don’t give up. Keep going. Do whatever small thing you can do today because nothing happens overnight.”