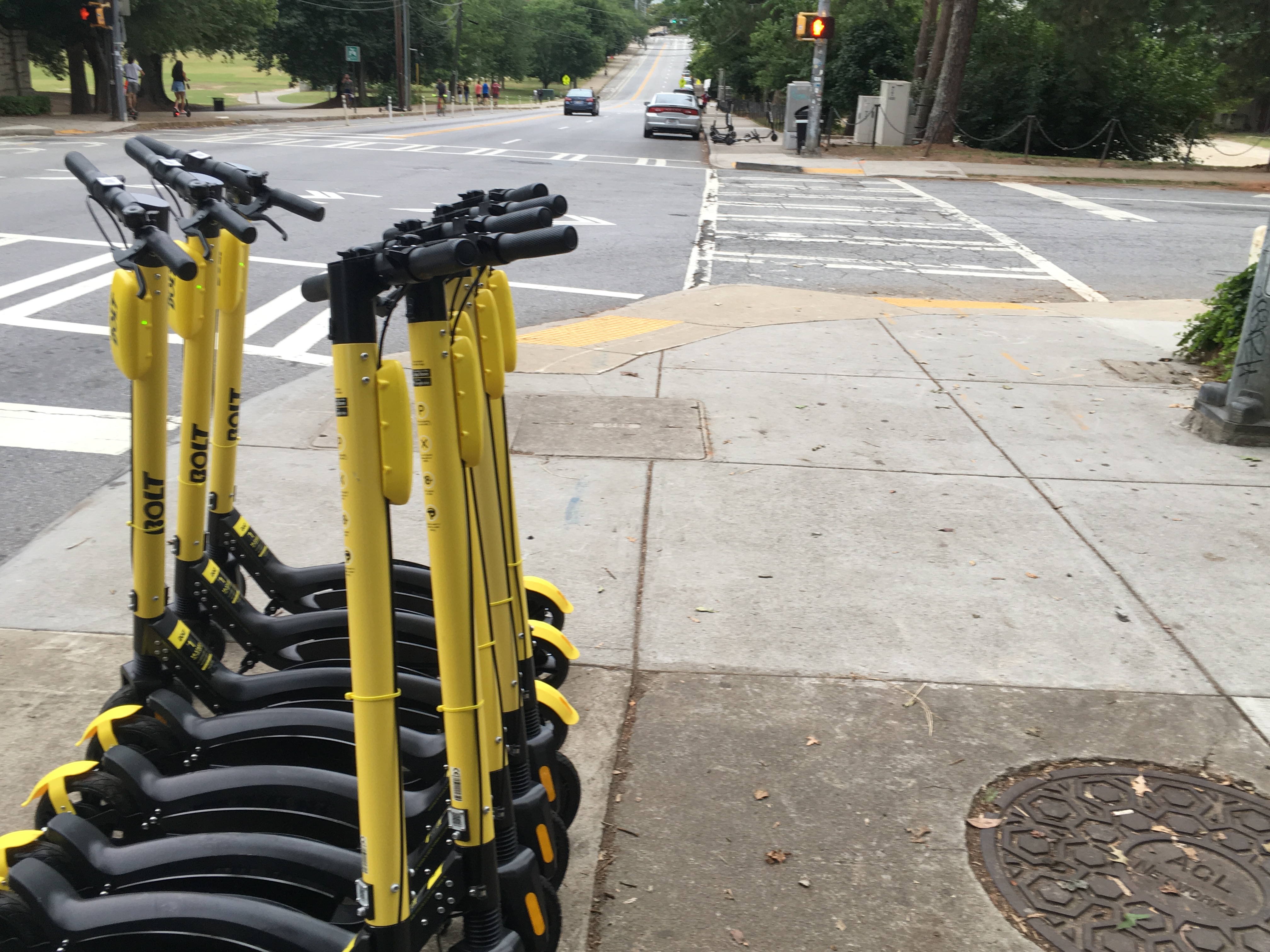 A Midtown meeting room was a bit rowdy last week — by the standards of an evening panel discussion on local public policy. But the topic was e-scooters and e-bikes, and the frustration is real.

Atlanta’s basic rules on “dockless mobility devices” are simple: don’t ride them on sidewalks and don’t park them in places where they block the road, the sidewalk or curb cuts.

On the blocks around the Peachtree Street meeting venue, it didn’t take long to see those rules being broken. 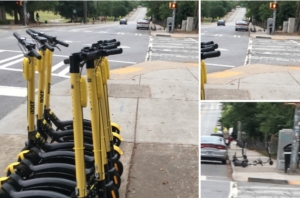 By Piedmont Park in Midtown: numerous unused scooters parked to the side and in the background, scooters blocking the sidewalk. Credit: Maggie Lee

There are joyous riders, angry pedestrians and all kinds of folks in between.

Right now, e-scooter and e-bike users are being “subsidized” by pedestrians, said Sally Flocks, president and CEO of PEDS, a pedestrian advocacy group and organizer of the panel. Not subsidized with money, she said, but in loss of sidewalk space and loss of peace of mind as scooters zoom around.

“I’m hopeful that these can be an effective device for transportation. Cars simply take up too much space,” Flocks said. “We’d like these to work, but we feel absolutely they can’t be on the sidewalk.”

You might say the e-scooter thing started in Atlanta with discourtesy. People aren’t supposed to just deposit things on sidewalks, but that’s exactly what Bird did last year, dropping off scooters in a city that had no warning they were coming and had no regulations ready.

But the company wouldn’t have bothered dropping them off if no one was going to ride them, and other dockless device companies have followed Bird to the city.

People took an average of 11,500 trips per day in February and March this year, according to reports to the city from scooter and bike companies. That could be a resident or worker going around, it could be a tourist joyrider. The vehicles could be a big part of mobility in a city that’s getting denser.

Yet the same reports suggest a glut of idle vehicles. The average trip was just over 15 minutes; and the average device had not quite three riders per day.

Atlanta’s first steps in addressing scooter chaos have been setting up the rules and an education campaign about them.

The city is also looking at “low-cost interventions” to try and nudge people into parking into the right places, like by installing marked corrals or visual cues indicating where to park, said Cary Bearn, interim director of Atlanta’s Office of Mobility Planning, also speaking at the Thursday panel. 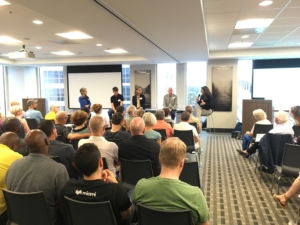 About 100 people came out to the micro-mobility panel — many angry about e-scooters blocking and using the sidewalks. Credit: Maggie Lee

But since the whole model of scooters is rider convenience, that’s not likely to be a complete fix. And unless there’s a complete ban — or the money dries up — the companies aren’t going anywhere.

Bearn said that a lot of people don’t know, or don’t care, (how ever you want to characterize them) about proper use of sidewalks, biking space or roads, for that matter. Unless they are the most vulnerable user of that space, she said, they don’t get it.

And the audience piped up with muttering and comments like “It’s called a sidewalk for a reason,” and “The key word is walk.”

(One easy example is a scooter blocking a curb cut — that will trap some wheelchair users in or out of the street.)

At that same forum, district Atlanta City Councilwoman Jennifer Ide tried to temper expectations about how much time or energy might be spent on enforcement by police and the Department of Public Works. The two agencies split the job: police for bad riding and DPW for bad parking.

“I know it drives people crazy when we pass laws and they’re not enforced,” Ide said. For example, not a lot of motorists get tickets for failure to stop at crosswalks, she said, adding that they should.

Ide said she’s in favor of looking at other ways to change peoples’ behavior as well, which might include “geofencing,” for example. That’s using software to deactivate or slow down scooters at certain places, like at a park during a festival.

“I do think we do need to continue to push, push, push the education,” Ide said. “And then we are beginning to refine our thoughts a little bit more on what’s the appropriate penalty for violations.”

Ide also said that she thinks that in the last few weeks, companies are doing better about parking the vehicles appropriately on the BeltLine and on park trails.

That was one of the points that caused enough murmuring across the room that she paused, stopped by voices offering comments like “worse,” “worse” and “terrible.”

Previous Article
‘The Souvenir’ – Tilda Swinton and her daughter play drab roles
Next Article
The S.A.F.E. Center helps students inside and outside the classroom