Footnote in history: Romance of railroads brushing against Internet of Things

Atlanta’s installation of Internet of Things technology is brushing against a slowdown in the railroad industry that gave rise to the city. 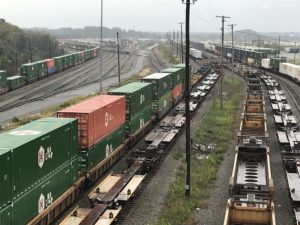 Norfolk Southern will allow Atlanta to encroach into its right-of-way at its Inman Yard terminal to enable the installation of fiber optic cable. Credit: David Pendered (2018)

This footnote in history relates to Atlanta’s installation of fiber optic cable as part of the effort to establish a futuristic intelligent transportation system. Cables that transfer data at the speed of light are being installed along tracks that serve locomotives and railroad cars.

Atlanta is installing cable that has to cross into rights-of-way owned by CSX Transportation, Inc. and Norfolk Southern Railroad Co. In the case of the CSX segment, trains no longer use the section of CSX rail where the city needs to work.

The site is at the intersection of Boulevard and Decatur Street, according to a construction drawing traveling with a piece of legislation pending before the Atlanta City Council.

Atlanta City Councilmember Natalyn Archibong, who chairs the council’s Utilities Committee, observed during a meeting Tuesday that CSX no longer uses this section of track. Archibong wondered if the city is still on the hook for a $1,750 encroachment fee to access the site.

“It doesn’t matter that CSX is not operating there anymore? That doesn’t change the variable at all?,” Archibong observed. 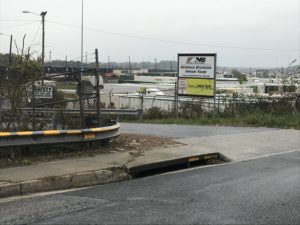 The railroad’s right-of-way extends about 150 feet from the rail corridor. The area includes the aerial space and wooden pole where fiber optic cable is to be installed, according to the construction drawing.

“The cost is something they generate and we review,” Wynn said.

CSX has been shifting its footprint in Atlanta since 2018. That’s when CSX sold land to the city for a future segment of the Atlanta BeltLine. Last year, CSX announced it was closing Hulsey Yard, located along Boulevard.

Husley had been a busy terminal where trucks and trains shifted trailers between the two modes of transportation. CSX closed Hulsey and concentrated operations at a terminal in Fairburn, farther from traffic congestion in the central city.

These changes in Atlanta are part of CSX’s broader realignment of resources. A report by the trade publication joc.com highlighted the scope of changes along the Eastern Seaboard.

The deal Atlanta is working with CSX is one of three that are to enable the installation of fiber optic cable. Here are the details:

The fiber optic cable Atlanta is installing is part of the IoT upgrade Atlanta voters approved in 2015. The cable is part of the 23 traffic communication corridors that are identified in an audit released in 2018 by Atlanta’s internal auditor, Amanda Noble.

The best known project on the list of corridors may be the North Avenue Smart Corridor. The city devised the project in conjunction with Georgia Tech, which served as a research partner on what was viewed as a “living lab” test of technology. The Smart City Expo World Congress awarded the project an international award in 2018, recognizing it as an innovative and transformative program.