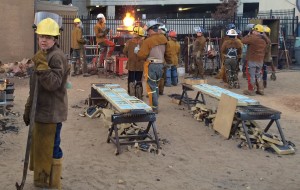 Lorelei Marden, a GSU junior and president of the Edgewood Sculpture Forum, works the furnaces at the 43rd annual Holiday Iron Pour.

The 43rd annual Holiday Iron Pour, held at a makeshift foundry operated by Georgia State University sculpture students and professors, marked the end of an era and an uncertain future for this tradition of making one-of-a-kind items from molten metal.

Scheduled on a Saturday in December, the Holiday Iron Pour is an all-day open house in which the public is invited to make cast iron sculptures. Anyone can buy a “scratch block” of compressed sand ($15 to $35, depending on size) and etch a design for an address marker, memorial plaque or other artwork. Professors and students from the sculpture program at GSU’s Ernest G. Welch School of Art and Design fire up furnaces to some 3000 degrees F and pour the molten iron into the blocks; once the blocks harden, they cool them and scrape off blemishes. Roughly 500 people showed up Saturday.

The foundry is located in the Edgewood sculpture building, which in 1983 moved into an abandoned structure that once housed Jack’s Clothing Store. Today Georgia State needs more dorm space, so after Saturday’s event, dozens of students, professors and friends paraded with a crucible of molten iron to the new digs down the street. There they poured a mold of an acorn, less than the size of a football, to symbolize their new start.

But the new location is half the size and doesn’t have a foundry, so the acorn also symbolizes expectations of the GSU sculpture community to raise funds to renovate and keep the iron pouring. “We want to show to the university that we’re still as self-reliant as we always were,” said George Beasley, the professor emeritus who started the Iron Pour.

In Atlanta—a place known for fire, ashes and resurrection—there’s nothing quite like the Holiday Iron Pour. My older daughter held a birthday party there several years ago, and as the sun went down and so did the temperature, the furnaces warmed us and we watched the sculptors, in their fireproof suits, pour the metal. The scene was much the same Saturday when my younger daughter made Christmas gifts for friends and relatives.

“It’s absolutely awesome,” said Susanna Martinez, at her family’s third straight visit to the iron pour. She and her husband, John, brought their sons Christopher, 11, and Robert, 8, and daughter, Athena, 9 months. Joining them was Noah Huffmann, 11, who dug out a Clemson Tiger paw on his scratch block. “Every year we try to bring someone else out,” said John Martinez.

Others, with Christmas in mind, said they enjoyed creating gifts built to last. Compared to presents that fall apart or become obsolete, iron art is almost indestructible.

Patricia Villafane, a GSU senior and photography major from Puerto Rico, said she was happy with the “very durable” gift she made for her mother: a plate bearing the name “Luna” and a crescent moon.

Nadia Marie, a junior in GSU’s sculpture program, said the artwork made Saturday are “the kind of gifts that someone can hold onto forever. They can weather time.”

GSU junior Lorelei Marden, president of the Edgewood Sculpture Forum, said the forced move is “a big bummer.” Adversity has shaped the GSU sculpture community before. Three decades ago, the university decided to move the sculpture program from the main art and design building.

“We literally got dumped into an abandoned building,” Beasley said. “It was kind of benign neglect that taught the students to survive. Back in those days there wasn’t any feeling of obligation to art and design students by the university.”

Students and Beasley started the annual iron pour as a way to help their program endure. At first it was staged on a campus courtyard near the ceramics department. Later the funds helped rehabilitate the building at 184 Edgewood by ridding it of rubble and stocking it with government surplus equipment, Beasley said.

Now it’s up to the GSU sculpture community to raise money to keep the iron pouring.

“We absolutely will be doing another iron pour come December,” said Welch School director Michael White. “This is a legacy we’re extremely proud of.”